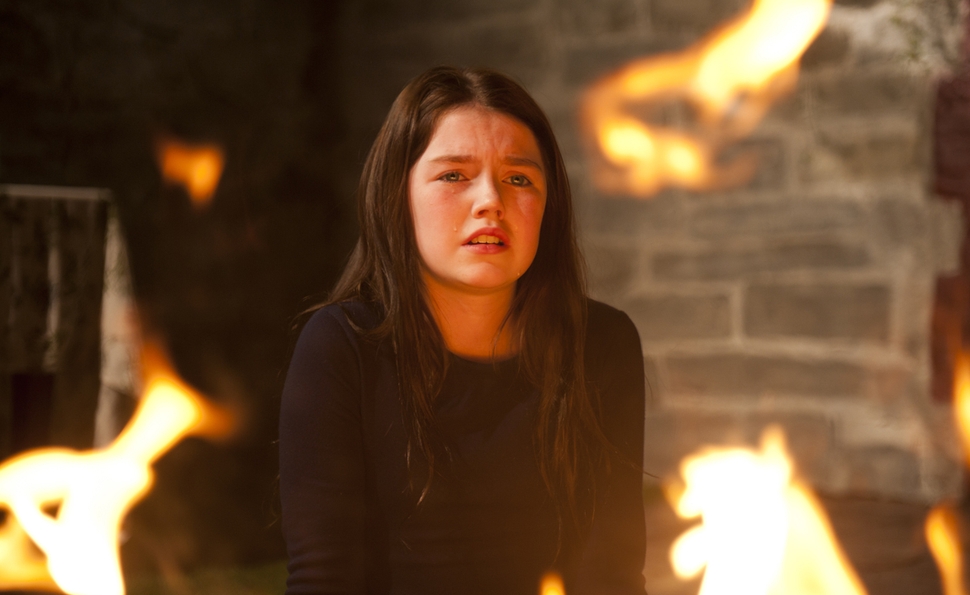 The title of the new horror film Dark Touch sounds a lot like “bad touch,” which may or or may not be intentional, but is certainly apropos. The film’s heroine is an 11-year-old girl named Niamh (Missy Keating), who comes to live with her neighbors Lucas and Natalie Galin (Padraic Delaney and Marcella Plunkett) after her parents are killed in a supernatural mêlée, instigated by Niamh. She also seems to be suffering from post-traumatic stress, but since her folks are dead—and since Tanya, the kindly pregnant woman from social services (Charlotte Flyvholm), is prevented by law from telling Lucas and Nat whatever she learns about Niamh—it’s unclear exactly what kind of abuse she suffered, or from whom. Niamh is partly the victim of a culture that won’t talk frankly about violence or rape when it happens to children, because it’s too horrible to contemplate. Instead, people speak in soft euphemisms, unsuited to the crime.

French provocateur Marina de Van uses the circumstances of child abuse as context for a Carrie-esque paranormal thriller, which some Dark Touch viewers may rightfully question, though it’s of bigger concern that de Van herself is so coy about what happened to Niamh. The way the girl flinches when her new foster dad innocently removes his belt—and the way she patrols her small Irish town at night, answering the terrified screams of battered kids—seems to indicate pretty clearly that her parents raped and/or beat her before they died. But Niamh also has telekinetic powers that she struggles to control, so it’s possible that her skittishness is related solely to her inability to keep from hurting other people. (This is another case where the larger conversation about child-abuse works against Niamh, in that she tries to tell her caseworker that she killed her parents with her mind, and Tanya waves her off, falling back on the useless palliative, “It’s not your fault if bad things happen.”)

But whether or not Dark Touch is in bad taste, it undoubtedly means to be a raw protest against the way some parents treat their kids. Initially, other children are terrified of Niamh, whispering among themselves that she’s a murderer, and bursting into tears when well-meaning adults suggest they invite her to their parties. But then Niamh starts calling out to her own kind with a Pied Piper whistle, organizing a youthful army of the night to avenge every uncomfortably intimate bath-time and careless swat on the back of the head. The film builds to a surprising climax, where Niamh and her minions re-create a typical evening at home, with the roles reversed between the grown-ups and children. What makes the sequence so powerful is that Niamh isn’t inverting a dysfunctional family; it’s every seemingly happy middle-class clan in which parents run roughshod over their offspring in a thousand tiny ways.

This is all more than a little heavy-handed. It’s also effective in a way that most horror films—the ones that don’t risk offense, in other words—are not. From the moment when Niamh first shows up on the Galins’ doorstep, covered in scratches and spitting up blood from a partially severed tongue, Dark Touch is uncomfortable to watch, even though its shock-scenes and gore are actually kept to a minimum. As with de Van’s previous films, In My Skin and Don’t Look Back, Dark Touch is meant to touch a nerve, not merely spook. It’s about deeper fears, and realer monsters.