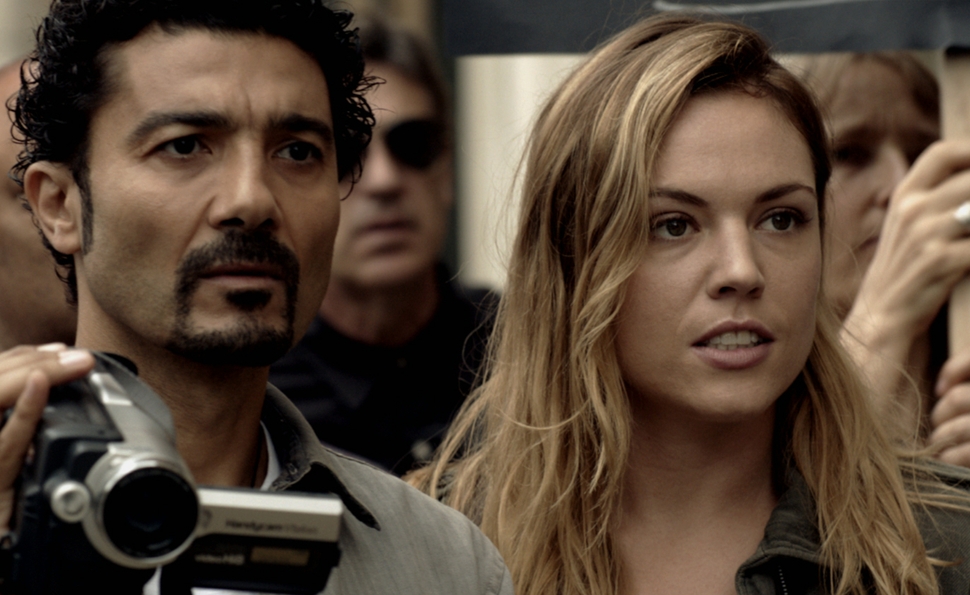 “Everything happens for a reason—I just don’t know the reason yet,” Lebanese immigrant Ibrahim Jarrah tells a friend midway through Sam Kadi’s debut feature, The Citizen. He never learns why, either, because the reason is outside his purview: Every moment in his life is meaningful because he’s the star of a painfully deterministic film, in which virtually every line and every action is a heavy-handed setup for a direct payoff. Sometimes the other shoe drops within seconds, sometimes not for an hour. But there are no casual conversations in The Citizen, and no idle moments. It’s pushing its agenda at every moment, first gently, then relentlessly.

Egyptian star Khaled Nabawy plays Ibrahim, a polite, soft-spoken man who comes to New York City after winning the green-card lottery. In an exposition-packed conversation with his immigration intake officer, he mentions that this bit of good fortune is uncharacteristic for him, given how the Lebanese civil war, Syrian economy, and Iraqi invasion of Kuwait have forced him from country to country. His timing, the film implies, is terrible, and his luck is worse. In the first of many easy ironies in the film, the immigration officer hears this tale of woe, then stamps Ibrahim’s papers… revealing that he’s arrived in NYC on September 10, 2001.

From there, Ibrahim has a busy 24 hours setting up the contrivances that will haunt him throughout the rest of the film. When he helps a woman named Diane (Agnes Bruckner), she rewards him with a montage-tour of the city, buying an American-flag T-shirt, visiting Times Square, and marveling over the freedom and temerity of anti-Bush protestors—all while setting up more payoffs to come. The next day, the planes hit the Twin Towers, and Ibrahim is promptly locked up for six months without being charged or permitted contact with or counsel from the outside world. (Terrorists don’t get lawyers, says the government agent who’s positive Ibrahim’s travel history indicates a tie to the 9/11 hijackers.) When he’s finally released, he finds Diane, looks for work, takes English classes, and tries to be a good citizen, but positive intentions alone don’t help when—on the eve of his citizenship test, of course—he’s notified that he’s being deported, and needs to defend his right to citizenship in an emotional courtroom climax.

The Citizen fits squarely into a certain breed of modern immigration dramas (A Better Life, Under The Same Moon, In America, and others) that depict the American system as heartbreakingly stacked against newcomers who want nothing more than a modest, non-threatening, thoroughly patriotic version of the American dream. Ibrahim is designed as the perfect unobjectionable immigrant: He’s polite, clean, humble, hard-working, mild-mannered, deferential, giving, brave, and open-hearted, yet still beset by racist, histrionic suspicion at every turn. But by making him such an obvious symbol, Kadi and co-writers Jazmen Darnell Brown and Samir Younis make him less than human. Nabawy plays him as soulful and wounded, but there’s little sense of human anger or desire under the grave, sad facial expression. He’s Sayid from Lost at his gentlest and most vulnerable—they even share a last name—but without any of that character’s balancing sense of menace and frustration.

There’s also little sense of approachable reality to the story, which plays out in platitudes and straight, broadly drawn lines. At several points throughout the film, George W. Bush pops up on TV screens, delivering soundbites—the “They hate our freedoms” speech, the “Either you are with us, or you are with the terrorists” speech—and those pat, simplistic speeches set the film’s tone. Ibrahim is a sympathetic character, an underdog with every right to succeed, and he’s compelling and inspirational in his devotion to doing the right thing, whether it’s sheltering a homeless man or intervening when a gang of white supremacists assault a Jewish man in front of him. But he’s also a paper saint. And the people around him are similarly artificial—particularly Diane, who represents America’s charitable impulse and its limitations, and the beautiful Lebanese woman he romances, who hangs around in the film just long enough to deliver a speech tempting him to give up on America and return home.

The film has its intermittent strengths throughout the first three quarters. Joseph White’s sharp cinematography is warm and chilly by appropriate turns, and he captures some strong images, like one of Nabawy walking aimlessly from the facility where he was imprisoned, wearing his American-flag shirt and pausing, in a moment of uncharacteristic, tiny rebellion, to leave a gate standing defiantly open. And the chemistry between Nabawy and Bruckner is complicated and compelling, ranging between twinges of romance to a supplicant/patron relationship in some scenes, and an almost father/daughter dynamic in others.

But any pretense to approachability breaks down in the courtroom ending, as an immigration lawyer played by Cary Elwes (with an insanely distracting accent and an even more distracting attempt at an effusive, posturing Daniel Webster persona) faces off against a government lawyer played by William Atherton. Both men talk only in the windiest, most outrageously manipulative rhetoric: When Ibrahim demands, à la The Accused, for a chance to defend himself on the stand, Elwes opens by asking him, “How long have you dreamed of being an American citizen?” Atherton, meanwhile, sneers and snarls his way through a prosecution that amounts to “All Arabs are probably related, and probably evil,” and contrasts Ibrahim’s presumed terrorist ways with those of “God-fearing Americans.” Ultimately, in the kind of courtroom reversal that only happens in films, Atherton himself more or less ends up on trial, with Ibrahim as both prosecutor taking racism and anti-immigration attitudes to task for their crimes, and defender representing immigrants’ inalienable right to citizenship. As he said earlier, everything in his life happens for a reason. But at many points throughout The Citizen, those reasons are so contrived, or so exaggerated, that they become completely ridiculous.