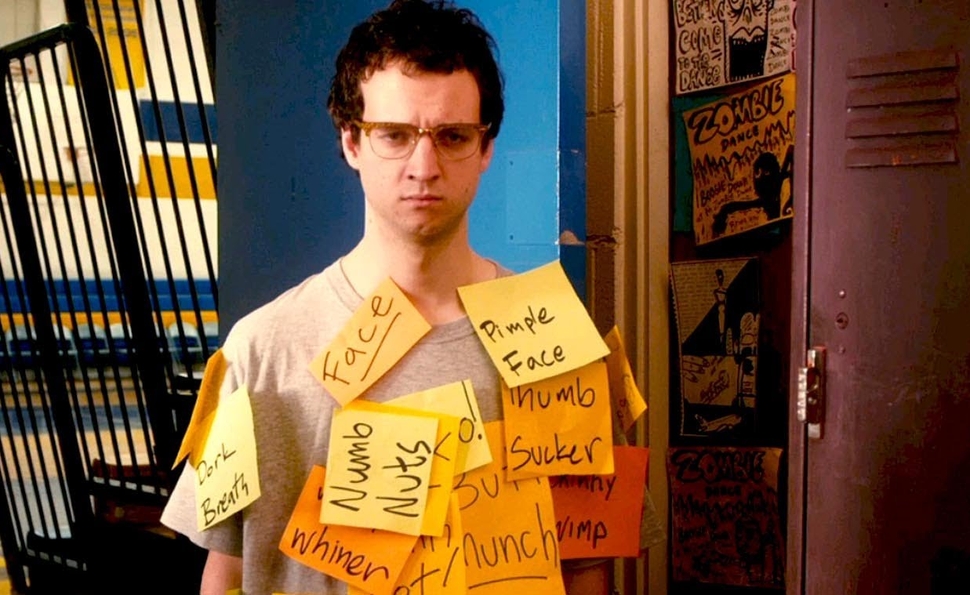 The Secret Lives Of Dorks

The Secret Lives Of Dorks is an unapologetically cartoonish high-school comedy with a sensibility halfway between contemporary young-adult fiction and 1980s teen-com directors like John Hughes and Savage Steve Holland. It’s a PG-13-ified Diary Of A Wimpy Kid, in other words, complete with animated interludes. It has a good heart and a good cast, mixing Hollywood veterans with some of today’s better young TV stars. But the movie is strenuously, exhaustingly unfunny, in a way that makes its phoniness harder to bear. Every time The Secret Lives Of Dorks seems like it just might come close to having something meaningful to say about what life is like for high-school kids in the 2010s, a 6-year-old swears, or a hapless kid pukes on his date. Far too often, this movie settles for the easy and the obvious.

Level Up’s Gaelan Connell stars as Payton, a lovesick geek who’s been obsessed with blonde cheerleader Carrie (The Newsroom’s Riley Voelkel) since elementary school. When Carrie comes up with a bright idea for getting Payton to stop drooling all over her in public—by teaching him how to woo acerbic comic-book fan Samantha, played by Switched At Birth’s Vanessa Marano—Payton decides to take the advice, because it means he’ll get to spend more time with Carrie. Gradually, though, Payton starts to see the advantages in dating a real woman instead of a fantasy, which would be a sweet moment of clarity, if Payton were anything more than a collection of nerdy tics.

Unlike a lot of movie “dorks,” the kids in this film aren’t just good-looking child actors with bad haircuts and ugly glasses; there’s something of a lived-in quality to the dorkdom here. (Even the conversations about comics aren’t of the “Could the Hulk beat up Superman?” variety, but more, “Would you rather go out with a Dave Stevens girl, or an Adam Hughes girl?”) And the female leads in The Secret Lives Of Dorks have a little more nuance than these kinds of movies usually allow. Carrie is smart, not an airhead. Samantha is dark and antisocial in public, but still keeps stuffed animals in her bedroom at home. Those layers come into play in The Secret Lives Of Dorks’ climactic scene at a Halloween dance, where Carrie dresses as Samantha and vice-versa, further confounding Payton’s preconceptions about what makes a woman desirable.

If only writers Nicholas David Brandt and Johnny Severin and director Salomé Breziner had confidence in the part of the movie that deals with the complexity of adolescent identity, The Secret Lives Of Dorks might’ve had a shot at approaching the level of sharp, sensitive recent teen movies like The Perks Of Being A Wallflower and The Spectacular Now. Instead, the film keeps undercutting its characters with interjections of broad comedy that range from the merely weird (such as when Payton’s dad, played by Jim Belushi, gets his parenting advice from a series of instructional videos starring Mike Ditka) to the creakingly farcical (such as when Payton meets Samantha’s parents for the first time and does one of those “I promise not to touch your daughter’s breasts… er, not that she doesn’t have nice breasts… er, not that I’ve looked at her breasts” routines that’s so old, it qualifies for a discount on coffee at McDonald’s).

Throughout The Secret Lives Of Dorks, Payton periodically imagines the worst thing that could happen to him in various circumstances, which the movie illustrates via motion-comics. But there isn’t enough difference between what goes on in Payton’s head and what goes on in his real life. It’s all thick lines and limited animation.