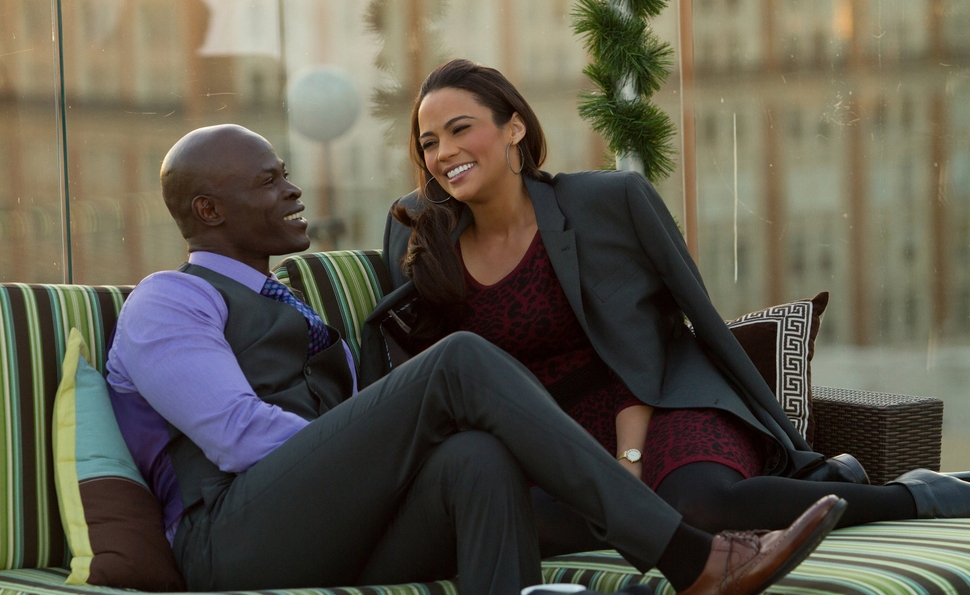 In the silly new romantic comedy Baggage Claim, the gorgeous Paula Patton plays flight attendant Montana Moore, the luckiest, most blessed quasi-cursed would-be spinster in film history. Montana’s mother Catherine (Jenifer Lewis) treats her as a crushing failure in the romance department because she’s approaching the dreaded age of 30 without a husband or a fiancé. Yet Montana spends the entire film fending off the advances of handsome, accomplished men who hurl themselves in her direction as if propelled by a catapult of glossy romantic fantasy.

For example, rich, kind, accomplished luxury-hotel mogul Quinton Jamison (Djimon Hounsou) tells Montana he would like to take her on a lavish trip around the world and shower her with jewels, gifts, and affection. But when Quinton reluctantly tells Montana that he isn’t interested in getting remarried, she says she thinks she can do better—and because Baggage Claim is such a crowd-pleasing fantasy, she’s right. She would be wrong to settle for nearly perfect instead of holding out for the perfection that is the birthright of every wacky rom-com heroine.

The film opens with Montana in a state of romantic bliss as she anticipates a wedding proposal from suave, globe-trotting millionaire businessman Graham (Boris Kodjoe) that will finally get her mother to stop fretting over what she sees as her eldest daughter’s imminent spinsterhood. Alas, the proposal never arrives, and some diligent snooping results in Montana discovering that Graham is cheating on her. Montana is devastated at the prospect of attending her much younger sister’s wedding without a serious date. After all, she’s the oldest child, and everyone knows a woman has a greater chance of getting swindled in a real-estate scam by a super-intelligent yeti than they do of finding a husband after age 30.

So Montana’s sassy gay sidekick Sam (a bow-tie-clad Adam Brody) hits upon a scheme as illegal as it is desperate and unnecessary: He engineers “accidental” run-ins between Montana and a series of her dazzling exes in various airports, under the assumption that at least one of these charmers from her past will be the man of her future. Sam assumes that the winners of tomorrow can be found in the losers of yesterday, and Montana goes along with Sam’s sketchy scheme because if she didn’t, there would be no movie. A plan that elaborate and involved entails a lot of planning and preparation. So all the goofy-looking oddballs in Montana’s airline company collaborate to improve their co-worker’s love life, which is like the homeless people of New York donating their spare change to Donald Trump. Seldom have people with so little given so freely and generously to someone with so much.

Montana soon starts reconnecting with exes who appear to be perfect before revealing their fatal flaws. Damon Diesel (R&B singer Trey Songz) appears to be living a life of wealth and privilege as a music-world bigwig, until it’s revealed he’s living on someone else’s dime. Langston Jefferson Battle III (Taye Diggs) appears to be a dashing politician with a limitless future, until he reveals he’s a condescending misogynist—behaving exactly as expected for a black Republican named Langston Jefferson Battle III in a movie like this.

Early in the film, Montana’s sexy, man-crazed friend Gail (Jill Scott) says she’s a strong, dynamic woman who doesn’t need to define herself by her relationships with men, but it takes damn near the entire film for those words to finally sink in. Baggage Claim eventually ambles around to the message that women don’t need marriage to be happy, but not before completely defining Montana through her relationship with her exes and her obsession with finding the right guy.

That isn’t the only way Baggage Claim is intent on having it both ways. Its emotional arc calls for Montana to refute her oft-divorced mother’s obsession with marriage and assert her independence, but just to be on the safe side, it also gives Montana Derek Luke as William Wright. (Yes, her perfect love interest is only one letter away from being Mr. Right). As Montana’s longtime best friend and soulmate, the funny, loving, handsome William would be perfect, if only he didn’t have a girlfriend who leaves the film almost as soon as she’s introduced. But Baggage Claim still feels the need to keep Montana from realizing that the man of her dreams has been right beside her the whole way until it is narratively convenient for her to wise up.

Baggage Claim is an unabashed upscale romantic fantasy/lifestyle porn, populated exclusively by men who seem to have stepped off the covers of romance novels, and beautiful women in gorgeous outfits. Its pleasures are all glib and surface-level, although Luke and Patton have enough chemistry to make their painfully clichéd relationship go down smoothly. Baggage Claim is at its best when it loosens up and simply lets these attractive, charming actors delight in each other’s company, like in a standout sequence where they happily dance to a song they loved back in high school, connecting for a brief moment with the goofy kids they once were. But those moments are few and far between in a movie strangled by convoluted plotting and an attitude toward women, marriage, and relationships that’s far less progressive than the filmmakers seem to think.