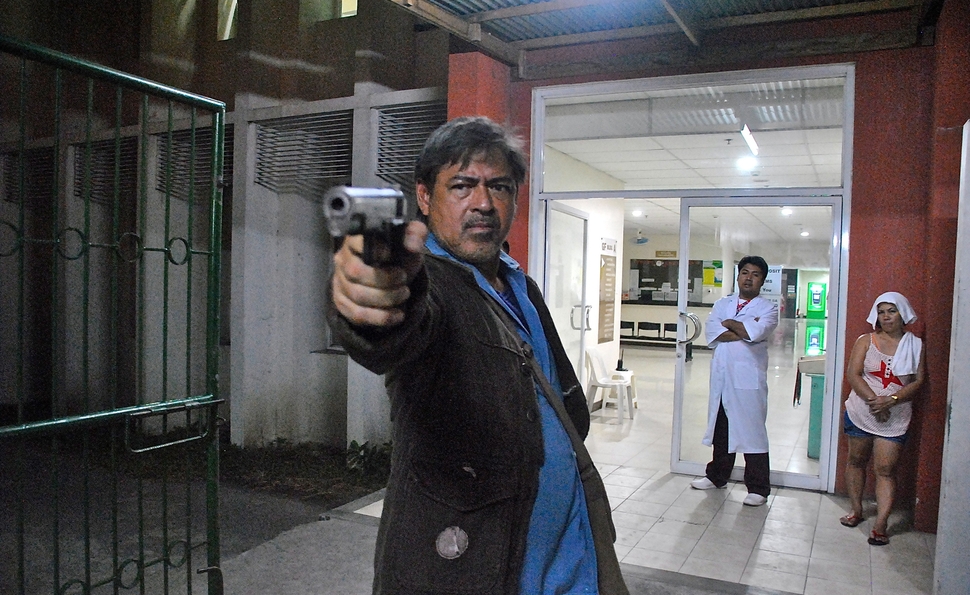 In a crowded marketplace in Quezon City, a densely populated hunk of Manila, two men carry out an audacious daylight assassination. The younger one does the spotting, locating the target and keeping an eye out for nearby police; the older one goes in for the kill, making certain the victim is close enough to confirm success. Because if the target survives—or if the police catch them, which is an excellent possibility in a such an open public space—both men are “retired” from their job, and most likely from their lives. And if they successfully complete the assignment, they’re granted a little time with their families before they return to their true home: a grimy, overcrowded, dangerous prison complex.

In the arresting Hong Kong-style thriller On The Job, co-writer/director Erik Matti doesn’t have to try hard to draw sympathy toward these professional killers, because the risks of the work so grossly outweigh the benefits. For the seasoned Tatang (Joel Torre) and his brash young protégé Daniel (Gerald Anderson), the most tangible luxury, beyond a brief taste of freedom, is being able to cut in line for whatever slop the cafeteria is ladling out. (And for Daniel, even that right is disputed, with bloody results.) They can’t spend their earnings in prison, and their job security ends with their release; for their bosses, the whole point of using inmates as contract killers is that their employees are tucked away in a place where the authorities would least expect them. After all, prison is a destination for people who get caught, not for those who escape.

There’s plenty of social significance embedded in the premise for On The Job, which centers around the same breed of desperate men who take company money to drive trucks full of nitroglycerin over a mountain pass in The Wages Of Fear. But Matti’s primary order of business is regularly serving up tense, stylish action sequences, and he proves more adept choreographing those than sorting out the convolutions of his parallel plotlines. As Tatang and Daniel set about their business, they’re pursued by two National Bureau of Investigation agents with a similar disparity in age: Sgt. Acosta (Joey Marquez), a veteran who’s lost much of his sharpness over the years, and the energetic Francis (Piolo Pascual), an up-and-comer whose idealism is shaken by the deep corruption at the top of the food chain. Both parties are on a collision course, finally clashing in an extraordinarily thrilling setpiece where the killers try to infiltrate a heavily guarded hospital to finish a botched assignment.

On opposite sides of the law, Daniel and Francis are set on the same course to disillusionment. They’re both brash, gifted talents in professions where only the most corrupt power-brokers reach the top. Though their neatly threaded plotlines create a picture of systemic rot, the politics of On The Job are incidental to the action, which consumes the vast stores of Matti’s creative energy. Shooting in the teeming chaos of a market, a hospital, and the streets of Manila, Matti has his characters dart through big crowds, but he doesn’t lose track of them—which is exactly the kind of precision targeting his killers must do in order to keep working. Driven by propulsive beats and a Westernized style that’s Martin Scorsese by way of Johnnie To, On The Job makes its influences plain, but at its best, it’s a case where the facsimile is every bit as good as the real thing.