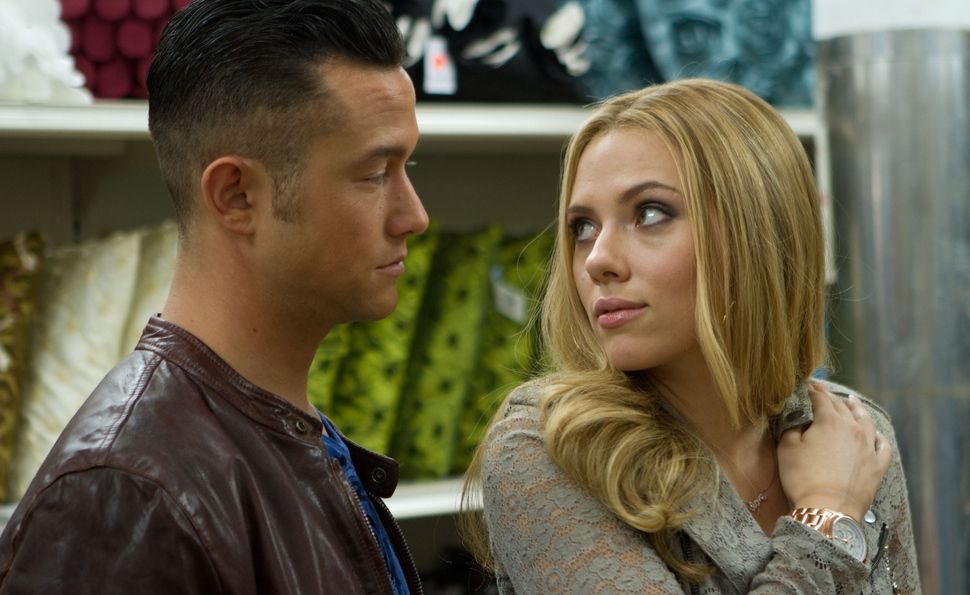 Occupying a tonal middle ground between a slightly dark rom-com and a light addiction drama, Don Jon follows its eponymous Jersey lothario, played with sleazy charm by Gordon-Levitt, through the touchstones that define his ordinary but contented life. As laid out in a fleet early sequence, Jon is a simple man with few concerns, namely: his car (the frequent site of bouts of road rage), his apartment (a pristine yet generic-looking bachelor pad), his church (which he attends weekly to confess his sins), his body (which he exercises while reciting his Hail Marys as penance), his two best friends, his family, and most germanely, his porn. A good-looking bartender in the Jersey Shore mold, Jon has no problem attracting beautiful women—in the terms of his tribe, pulling down eights and nines—when clubbing with his boys. But he finds the experience of drunkenly “smashing” them after-hours lacking by comparison to the Internet pornography he looks at several times a day—the type of pornography he’s later told is so far from what actual sex is like, it’s no wonder he’s dissatisfied with the real thing.

That is, until a “10” catches his eye in the form of Barbara Sugarman (Scarlett Johansson), a knockout who takes it upon herself to craft Jon into husband material, while making him believe that’s what he wants. That involves initially denying him easy sex, using it as an incentive to make him meet her friends and take a night class. But even once Jon gets what he’s after, he’s still unsatisfied, and so he turns again to pornography—until Barbara catches him and forbids it. Like any addict, he doesn’t stop; if anything, he gets worse, furtively ogling clips on his smartphone while driving and during class, until he’s caught in the act by a nosy older classmate, which would seem like a throwaway gag if not for the fact that she’s played by Julianne Moore.

Moore’s character, an intriguingly odd yet deeply sad woman who speaks with a frankness that’s unlike anything Jon is accustomed to, is a Manic Pixie Dream Woman. She’s unlike Barbara in almost every way—unselfconscious, curious, open-minded, and “matronly,” in whatever world Julianne Moore can be considered matronly—and while it’s inaccurate to characterize their relationship as a love triangle, she winds up being a very different sort of catalyst in Jon’s life than Barbara. Her effect on the main character is integral to the story, but like Barbara, she exists only in relation to him.

For as much trenchant observation as Don Jon makes about female objectification—one clever scene foregrounds Jon’s mom and sister against the hypersexual backdrop of a Carl’s Jr. ad playing on the TV behind them—it doesn’t do particularly well by its female characters. This is epitomized by Brie Larson’s role as Jon’s sister, who is completely silent throughout the film, contributing only bored sneers to any conversation, until she makes a timely observation that rocks Jon’s world. It’s a funny gimmick, but it also seems like a waste, given Larson’s talents. But Barbara is more problematic, quickly devolving into a one-dimensional cartoon, and while Johansson seems to be having a ball playing her—she appears to have closely studied Jersey Shore’s Sammi “Sweetheart” Giancola, right down to the spot-on gesticulating—Barbara seems to have no real motivation other than driving Jon’s emotional arc. Similarly, Moore’s Esther, while much warmer than Barbara, is no less shallowly depicted: She has a little backstory, but mostly, she has a deep (and frankly, inexplicable) interest in the protagonist, and her actions unfold accordingly.

But while Don Jon fumbles the execution with its female leads, its heart is in the right place, and any misogyny on display in the film is wholly intentional. Gordon-Levitt’s script makes plain the source of its main character’s skewed view of the female species and how men should relate to them, and if he treats his female leads more as catalysts than characters, it’s because he’s pushing Jon toward a sort of enlightenment in that regard. (Only sort of; one of Don Jon’s strengths is that it doesn’t attempt a capital-R resolution, just a notion of better things to come.)

Gordon-Levitt does a lot of pushing in Don Jon—through voiceover, flashy editing, and well-executed but slightly obtrusive musical cues—to telegraph what the audience should be thinking. That works better than it could, or should, but it sometimes comes across a little overeager, as if Gordon-Levitt wants to make sure everyone is as excited about what’s going on onscreen as he is. Such enthusiasm can be appealing, especially when directed toward interesting themes like the ones he’s grappling with here; but it would be nice to see him slow down from time to time, and let a thought really develop before moving on to the next one.