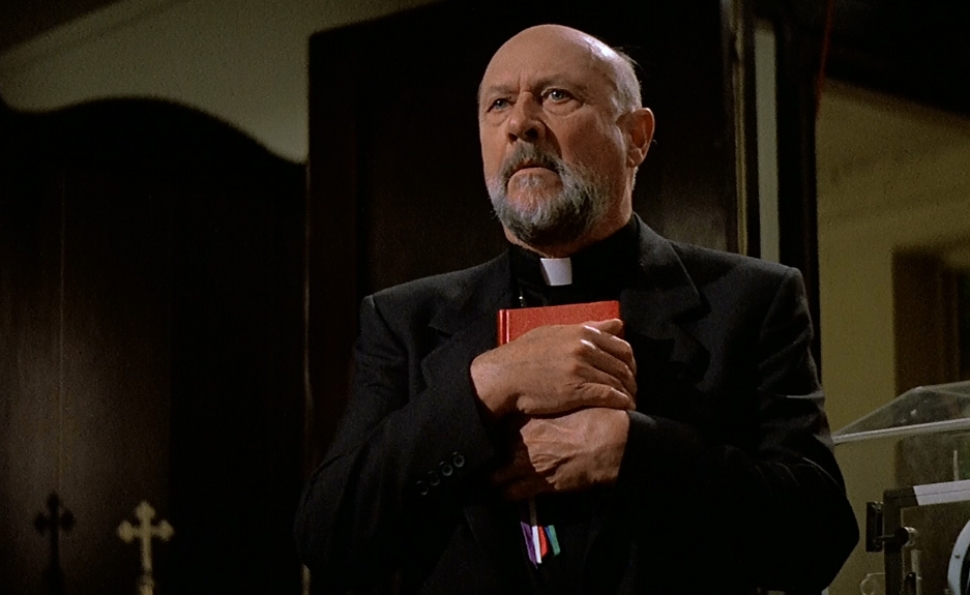 John Carpenter didn’t always enjoy the smoothest professional ride in Hollywood after graduating to bigger-budget features in the early 1980s, and after the financial underperformance of Starman and Big Trouble In Little China, it made sense to take a break. The low-budget Prince Of Darkness resulted from that break, and though it was less than rapturously received at the time by critics and audiences alike—and it’s still no one’s favorite Carpenter film—it’s an endearingly odd, consistently creepy film that hearkens back to the director’s previous work. Set largely in an old church on the fringes of Los Angeles, it surrounds its heroes with a swarm of enemies, à la Assault On Precinct 13, then introduces the threat of a doppelgänger that can hide among them, à la The Thing. But Prince Of Darkness feels more like a remix than a rehash, at times playing like a half-cracked rip-off of a Carpenter film, only with Carpenter himself at the helm.

Carpenter wrote the film under the pseudonym Martin Quatermass, a tip of the hat to the British science-fiction hero Dr. Quatermass, and a particular nod to the 1967 movie Quatermass And The Pit, in which the unearthing of an ancient artifact leads to unsettling revelations about the nature of evil itself. There, it’s an alien vessel. Here, it’s a container filled with glowing green matter that’s been buried for centuries under the church at the center of the action—and kept secret even from the Vatican. And in both, the forces of science and religion discover they have a lot more in common than they’d previously imagined, and that neither of their beliefs provide much comfort.

Carpenter favorite Donald Pleasence plays a priest—unnamed until the credits, which reveal him as “Father Loomis,” the same surname as Pleasence’s Halloween character—called in to deal with the green stuff. Sensing he’s in over his head, Loomis recruits Professor Birack (Victor Wong), an old physics-professor friend, who in turn brings in a whole team of assistants armed with the most advanced technology a mid-1980s film could afford. Their ranks include Brian (Simon & Simon star Jameson Parker) and Catherine (Lisa Blount), the film’s ostensible protagonists, though neither Carpenter’s script nor the actors give them much depth beyond their quicker-to-die co-stars. Their quest is nothing less than, as one of those shorter-lived team members puts it, “ultimate truth,” arrived at by deciphering an ancient text, receiving transmissions from the green matter, and watching as plagues of worms and bugs start to show up, accompanied by an army of evil homeless people led by Alice Cooper.

The film is pretty much as silly as that description makes it sound, and while Carpenter sometimes seems to acknowledge this, he also keeps ramping up a tone made all the more ominous by the film’s pulsing electronic score (written by Carpenter and Alan Howarth). Researchers fall, evil keeps taking on new forms, and Carpenter has great fun setting up the scares in scenes that pay homage to Luis Buñuel’s “Un Chien Andalou,” Jean Cocteau’s Orpheus, and other films that created a sense of the otherworldly on a limited budget. Some of the most unsettling moments come from Carpenter’s own low-budget innovation: Dream sequences—or, more accurately, transmissions from the future—shot on consumer-grade home-video equipment and made all the more disturbing by their fuzzy textures. (Somewhere, the future filmmakers of The Blair Witch Project were paying attention.)

As a piece of storytelling, Prince Of Darkness is borderline disastrous, letting Pleasence deliver pronouncements about biblical mysticism and science—Carpenter had an interest in quantum mechanics at the time—with hammy seriousness, and hoping it makes enough sense to count as a story as the cast starts to thin. Not all the parts work, either, particularly during a long stretch toward the end that substitutes chaos for subtle scares. Yet met on its own bonkers terms, Prince Of Darkness proves satisfying. “I wanted to do a movie that caused a lot of unease and dread,” Carpenter states on the film’s audio commentary. That it does, and at its own, deliberate pace. “Movies are all bebop now,” Carpenter complains in an interview included on the disc. The best parts of Prince Of Darkness serve as a reminder that other styles and slower rhythms have pleasures all their own.

Carpenter recorded a commentary with favorite character actor Peter Jason early in the ’00s, though it’s previously only been available on European editions of the DVD. It’s an entertaining listen. Jason only has a small role in the film, but he gives the often-terse Carpenter someone to respond to, and they seem to enjoy talking with each other, though the conversation turns melancholy when they refer to the then-recently passed Wong. (It’s less unintentionally melancholy when Carpenter mentions having recently seen Blount, who died a few years later at age 53.) Other features include new interviews with Carpenter, Cooper, and Robert Grasmere (an effects artist who has a small role), trailers, radio spots, a Screamfest Q&A with horror-movie expert Brian Collins (an unlisted, but easily found, Easter egg), and a visit to the film’s locations. Also notable: an alternate opening to the film that speeds up the action to an almost bebop pace.