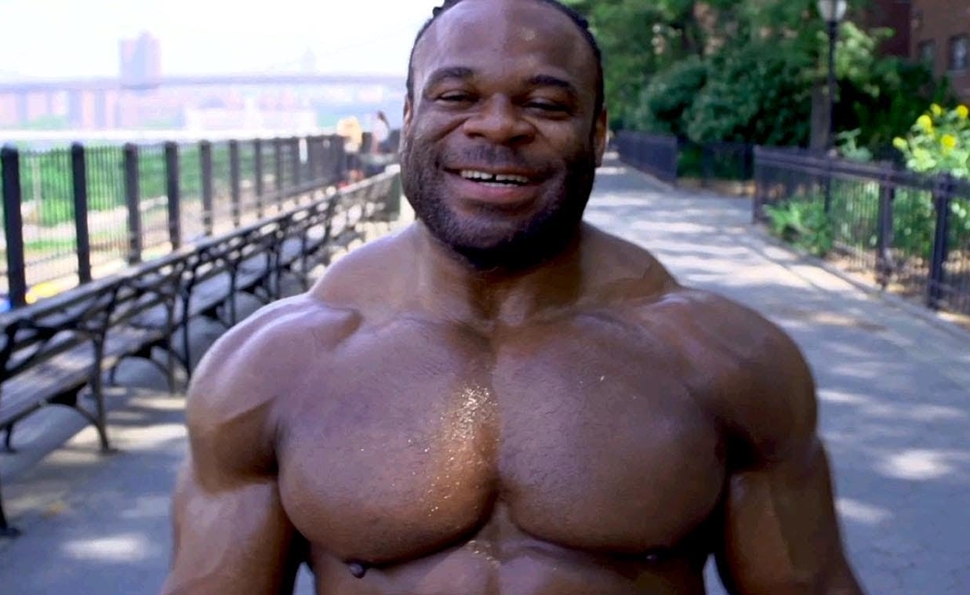 Like so many documentaries made in a pop style, Generation Iron is a squandered opportunity, sacrificing depth and insight for superficial portraiture and drama. Though it’s “from the producer of Pumping Iron,” the famed 1977 documentary featuring a young Arnold Schwarzenegger, Vlad Yudin’s non-fiction film (narrated with gravelly gravity by Mickey Rourke) is truly the offspring of Spellbound and its ilk, focused as it is on a subculture competition—in this case, the 2012 Mr. Olympia championships, held each year to crown the world’s greatest bodybuilder. Before arriving at that hallowed contest, however, Yudin first fixates his gaze on a handful of contenders to the Mr. Olympia title. Those include reigning 2011 champion Phil Heath and a gaggle of adversaries led by Kai Greene, an iconoclastic Brooklynite who grew up in foster homes and now, when he’s not working out in gyms, paints enormous canvases of bodies in tumultuous motion and performs his flexing routines in subways while wearing a mask.

With a soft, sensitive voice that can transform in an instant into a profane growl, Greene comes across as a thoroughly unique, unconventional figure in a sport dominated by aggro machismo. Yet while Generation Iron seems to recognize Greene’s distinctiveness, it nonetheless expends little time investigating his backstory, personality, or day-to-day routine, because it’s too busy flip-flopping between bodybuilders who are all depicted in similarly sketchy terms. It’s a familiar pop-doc shortcoming, but a frustrating one nonetheless, as Yudin’s decision to opt for a wide-ranging collection of shallow portraits sabotages any chance of learning something meaningful or profound about these men.

That surface-only approach extends to his depiction of bodybuilding itself, which despite being the nominal subject of his documentary, is only cursorily explained. Although Heath and others—such as Ben Pakulski, who, like a modern-day Ivan Drago, trains with scientists in white lab coats—claim their attention to nutrition and muscle symmetry requires an intelligence far greater than they’re typically given credit for, Generation Iron goes into absolutely no detail regarding the specifics of how they design their diets or their workout regimens. Instead, it simply shows lots of enormously buff men ingesting powdered protein shakes and lifting massive weights—a strategy that contradicts the we’re-more-than-just-muscleheads reputation the bodybuilders themselves seek to promote.

While Arnold Schwarzenegger laments the fact that modern bodybuilders—now so large that they make his own Mr. Olympia build seem slight in comparison—have lost a sense of muscle proportionality, Generation Iron offers no historical comparison between past and present, further relegating its material to a mere diversion. Even with regard to the elephant-in-the-room issue of steroids, the doc goes only skin-deep. A few speakers (including Pakulski) more or less admit that performance-enhancing drugs are a rampant part of pro bodybuilding culture, but Yudin quickly drops the issue in order to get back to building suspense for the final Mr. Olympia battle between Heath and Greene. That climax, alas, proves suspense-free, since the director doesn’t even provide the basics about how each competitor is scored. Generation Iron is more concerned with mythologizing bodybuilders as hard-working warrior-athlete-entertainers than conveying the actual particulars about their sport or their lives.