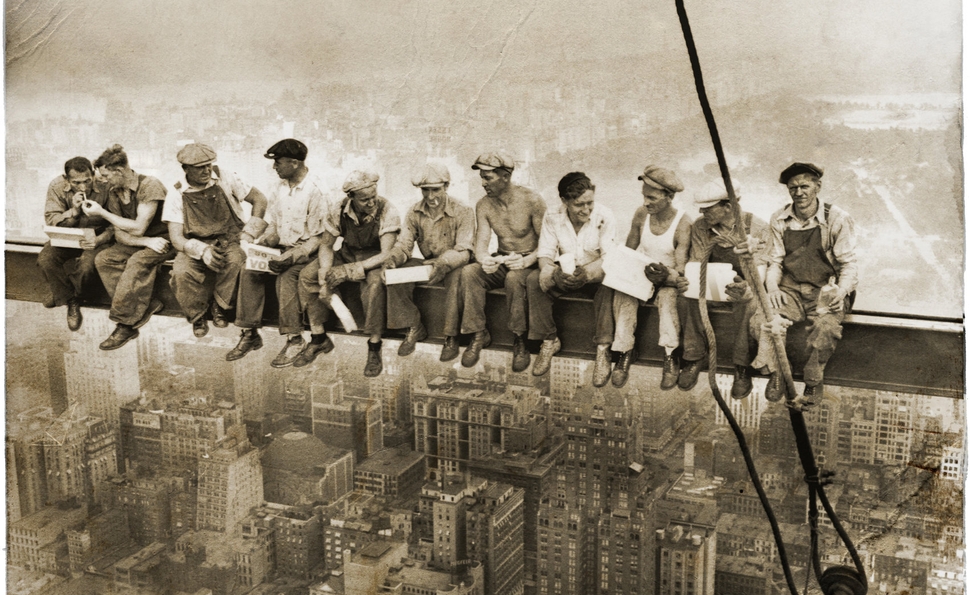 Forget that old saying about the “million stories in the naked city.” In Seán Ó Cualáin’s documentary Men At Lunch, New York is defined by a million photographs: a smooch in Times Square, a group of jazz musicians clustered in front of a Harlem brownstone, a former first lady crossing the street in casual-wear, and more. Men At Lunch is specifically about one of those photos, “Lunch Atop A Skyscraper,” taken on September 20, 1932 and first published in The New York Herald Tribune on October 2 of that year. The identity of the photographer is unconfirmed, as are the names of its subjects. But this shot of 11 men eating idly on a girder—69 stories above the streets of Manhattan—has become one of the most popular pictures of all time, reproduced repeatedly in prints, postcards, posters, and parodies. It’s a breathtaking portrait of a New York still under construction, being built by poor, tough immigrants taking any job they could get during the Great Depression.

Men At Lunch delves into some of the intrigue surrounding the photo. Over the decades, countless people have pointed at the picture and said, “That’s my grandfather,” but Cualáin tracks down a small Irish village that can make a credible claim to being the original home of two of the men—at least based on the family pictures and stories of their descendants. Cualáin also spends time in the photo archives of Rockefeller Center, where the curator shows other snapshots that were taken on the same day, some of which are credited and some not. (For a long time, “Lunch Atop A Skyscraper” was credited to Charles Ebbets, though there’s plenty of evidence to suggest that the shot could’ve been taken by somebody else.) Men At Lunch even visits the underground bunker of the Corbis Corporation—which holds the rights to the picture now—to examine the glass negative and confirm that the photo wasn’t faked.

All of these little investigations are fairly interesting, though less conclusive than Cualáin seems to believe. There’s not a lot of corroboration of any of what passes for proof in the film. Of more value is the context Men At Lunch gives to the photograph, by considering the history of New York, the ravages of the Depression, the immigrant experience, and why the picture was taken in the first place. (It was promotional, intended to encourage businesses to rent space at Rockefeller Center.) In 1932, the ironworking business factored into its costs the loss of about 40 employees a year due to death or crippling injury, and still had people lining up at job sites ready to fill in. Meanwhile, Prohibition and the rise of the speakeasy had people of different classes and ethnic backgrounds mixing socially more than they ever had. It was a hard time, but a hopeful time—and both ends of that spectrum are represented in “Lunch Atop A Skyscraper.”

But just as the documentary doesn’t really have the goods when it comes to solving  the photograph’s mysteries, it only skims across the surface of what the picture represents. Fionnula Flanagan’s narration is in the soft, boosterish mode of a museum welcome film, and her script (written by Niall Murphy) is given to making the kind of broad pronouncements usually better left to the experts, such as calling New York City “the greatest gathering of people on Earth… a monument to human endeavor,” and saying that “Lunch Atop A Skyscraper” is “owned by none of us, and all of us.” (Actually, it’s owned by Corbis, which in itself would make a good subject for a documentary, this stockpiling of images that probably ought to be in the public domain.) At 67 minutes long, Men At Lunch has time to broach a lot of different topics, but not to come anywhere close to exhausting any, which makes its conclusive tone toward what this picture is and what it means all the more bothersome. As historian Jim Rasenberger says at one point in the film, “The answers aren’t what makes it a great photograph, it’s the questions.” Yet Cualáin loads so many vague answers into Men At Lunch that the the questions themselves become increasingly ill-defined.