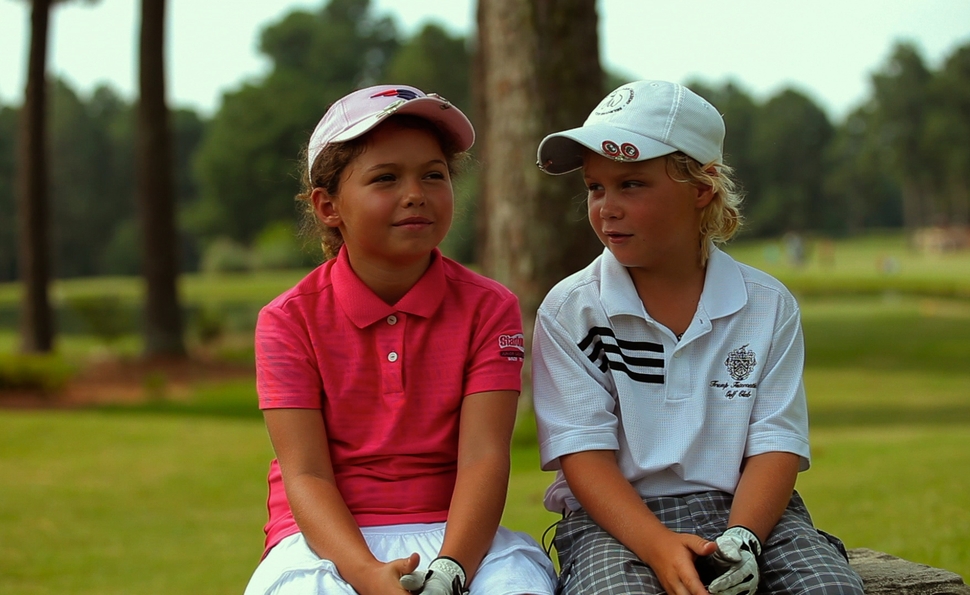 Beyond the faraway time zones that often muck up live broadcasts, the inherent problem with Olympics coverage is that viewers haven’t been following developments in javelin, water polo, or rhythmic gymnastics over the previous four years, so they need a primer on the key rivalries and personalities in any given event. The network’s solution is to clog the primetime broadcast with mini-biographies of the athletes: glossy five-minute tours of their homes and training regimens, and maybe some information about the devastating injury or personal setback they’re trying to overcome. There’s no real depth or candor to these pieces—just a commercial-slick thumbnail sketch to establish rooting interest, which tend to eat as much time in total as footage of the actual event.

Rigidly formatted as a Spellbound for pint-sized golfers, The Short Game links together eight such mini-biographies of 7- and 8-year-old kids and calls it a documentary. Director Josh Greenbaum draws from a global cross-section of young hopefuls, including kids from South Africa and China, but there’s little difference between how the clips are used in the Olympics and how they’re used here. Both are about establishing the stakes and investing viewers in the relative achievements of the athletes, and both have a perspective that’s more promotional than investigative. That’s more forgivable in the Olympics, where journalism isn’t much of priority, but for Greenbaum not to question an event where second- and third-graders are pressured into becoming the next Tiger Woods is a little suspect. He buys the “more than a game” party line without giving it a second thought.

The kids are adorable, though. Greenbaum covers a well-balanced pool of top contenders and hopefuls from more far-flung locales, all competing at the World Championships in Pinehurst, North Carolina. Among the first group: Allan Kournikova, younger brother of former tennis star Anna, whose day begins with core-strengthening sessions with a personal trainer and ends with three hours on the course after school; Alexa Pano, Kournikova’s female counterpart (and best friend off the course, too), who’s shadowed by a single father obsessed with refining her game; and Amari Avery, a middle-class African-American girl whose story (and temper) so closely mirrors Tiger Woods that she’s been dubbed “Tigress.” Among the outsiders: Augustin Valery, a wispy French intellectual who’s the grandson of famous poet Paul Valery; Zamokuhle Nxasana, a good-natured kid from the golf-crazy nation of South Africa, which traditionally exports only white professional golfers; and Jed Dy, a strong competitor from the Philippines whose autism proves to be both asset and liability.

These are all wonderful children, and Greenbaum offers up a big enough slice of their lives to make you wish for the whole pie. There isn’t enough time to probe deeper into some of the thornier relationships in the film, like the one between Avery and her father, who so wants his daughter to succeed and improve her social station that the pressure undoes them both. And Greenbaum barely grazes the surface of other father-daughter relationships that toe the line between family closeness and sick obsession; the fact that the best of these young athletes tend to be as poised and cliché-spouting as the professionals tends to paper over the fact that their childhoods are largely devoted to pursuing their parents’ dream. It could be argued that the kids are having fun and are picking up valuable life lessons, but The Short Game seems incapable of coming to any other conclusion.

It also indulges in one of the worst sports-movie tropes: The fake commentator. It’s bad enough in fiction films when play-by-play and sports-talk radio guys cough up exposition on air, but for a documentary to pretend that someone is announcing old footage of a children’s golf tournament as if it were being broadcast live is too much. Steve James solved this problem by quietly setting context with his own voiceover in Hoop Dreams, but Greenbaum is asking viewers to accept the fantasy of play-by-play of an event that’s in the distant past. In that way, too, The Short Game is like a tape-delayed Olympics: old footage, slick bios, no substance.