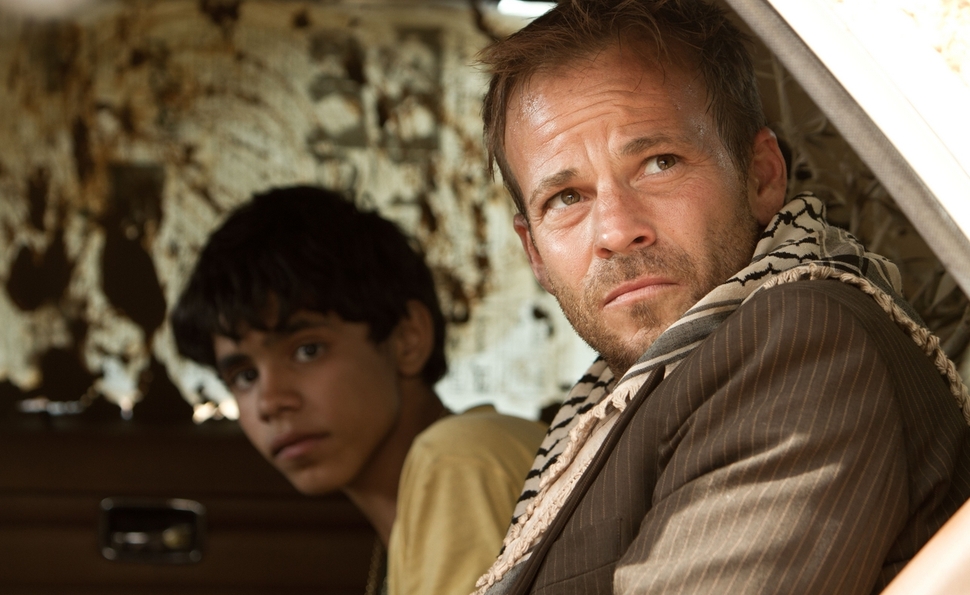 Zaytoun is the heartwarming story of an unlikely friendship between a young Palestinian insurgent and an American actor who thinks he’s an Israeli fighter pilot. The heartwarming part is that everyone in the film, including the director, has apparently honored a silent pact to pretend the American is a convincing Israeli, presumably because the American is Stephen Dorff, and they didn’t want to hurt his feelings.

The woeful miscasting of Dorff as Yoni overshadows any value the film may have offered from the minute he enters at the end of the first act, after his plane goes down during the 1982 Lebanon War and he becomes a prisoner of the PLO. He speaks with a mangled Mediterranean accent and an overly dramatic demeanor that suggests he needs to convince himself of the danger he’s in. The filmmakers have taken additional steps to distance his presence even further from acceptable movie reality: He only utters maybe 10 lines of elementary Hebrew, and he never appears in uniform even when inside his own IDF compound. Dorff brings to mind Charlton Heston hilariously posing as a Mexican in Touch Of Evil. Of course, it’s not 1958 anymore, and there’s no clear reason why the filmmakers needed Dorff—or any American, for that matter—to play Yoni.

Opposite Dorff (and running circles around him, acting-wise) is the sensitive 15-year-old Arab-Israeli actor Abdallah El Akal as Fahed, an aspiring PLO fighter with a mop top and a cocksure attitude. Fahed witnesses tragedy early and often, as the war claims first his widowed father, then his best friend. Director Eran Riklis is at his best in these early scenes, opening in Beirut with a chaotic extended take that establishes the disparity between Fahed’s perception of himself and his actual social stature. Later, there are some effective sequences of Fahed’s grief and chilling embrace of militancy—he writes the names of the dead in his notebook under the heading “Martyrs,” then loads a large firearm blindfolded in PLO training camp.

Yet Riklis and screenwriter Nader Rizq abandon this early, nuanced portrayal of Fahed once they pair him with Yoni on a quest to cross the Lebanon border. Now he’s just a boisterous teen: a single-minded simpleton, quick to assert his abilities and quick to make mistakes. He and Yoni bumble their way through one ludicrous manufactured crisis after another, from accidentally destroying a commandeered vehicle to playing soccer near a minefield, as they dutifully chug along their predestined Journey Of Understanding. Zaytoun is the kind of movie where a teenager points a tiny handgun at two military officers with assault rifles, and they drop their weapons because there’s no other way to get to the next scene.

Riklis, like many Israeli filmmakers, gravitates toward stories about Israelis clashing with embodiments of their Arab World adversaries. His earlier films include The Syrian Bride, a bureaucracy-impeded love story between a Druze woman and a Syrian man, and Lemon Tree, in which the Israeli Defense Minister attempts to remove a tree from a Palestinian widow’s property. Riklis’ tendency here, perhaps because he’s seeking a younger audience, is to simplify all signs of conflict, to plead, “Can’t we all just get along?” as bombs rain down. It’s an approach that can work in the right hands, but feels empty here because of how rote and watered-down the script is.

Example: Fahed carries around a bulky olive sapling his father had intended to plant on their homeland, and both he and Yoni will ultimately risk their lives to preserve the tree. (“Zaytoun” means “olive” in Arabic; its thematic purpose as the title should be obvious.) Fahed is an orphaned, homeless Palestinian boy trying to enter Israel in the middle of the Lebanon War. What will his life become once he’s planted the tree? It’s a question that clearly makes Riklis uncomfortable, so he avoids it. The script puts so much weight on the symbolic quest that it severs the link to the actual, physical predicament of its hero—yes, Riklis and Rizq miss the forest for the tree.

Though Dorff isn’t the only thing wrong with Zaytoun, he is still its biggest liability, and the rare case where one miscast role ruins a film’s essential premise. Because he is so obviously not Israeli, his gestures of compassion toward his Palestinian buddy carry no weight in the broader context of the conflict. Every one of his actions reeks of artifice, and his performance is the theater of phony diplomacy. “You are all the same,” Fahed snaps at Yoni during an emotional moment. Somehow, that seems doubtful.