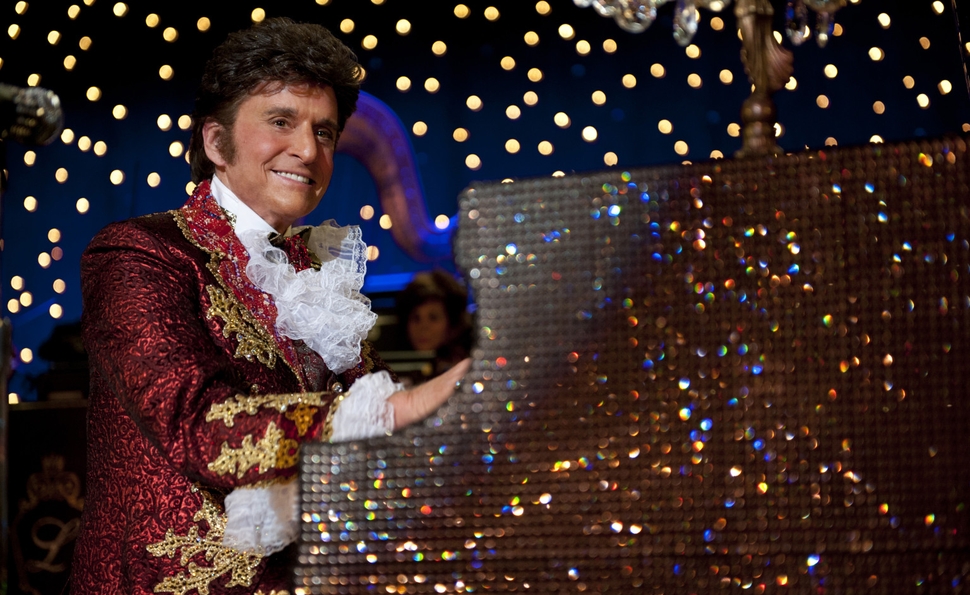 Early in Steven Soderbergh and Richard LaGravenese’s HBO biopic Behind The Candelabra, teenage hunk Scott Thorson is lounging around in bed with his new lover Liberace, and warning the international superstar that he’s actually bisexual, not gay. Liberace smiles, pats the naked Scott, and says, “What’s important is to be yourself.” In real life and in this movie, Liberace vociferously and litigiously denied his homosexuality in public. And yet who was more himself in showbiz than Liberace? Between his flamboyant costumes and effeminate lilt, Liberace never really hid who he was. At another point in Behind The Candelabra, Scott frets over Liberace kissing him in front of the maid, and Liberace waves off the worry, saying, “People only see what they want to see.” With Liberace, what people mostly saw was a confident, talented man. A bit strange? Certainly. But with a massive fortune that insulated him from excess scrutiny.

Behind The Candelabra stars Michael Douglas as Liberace and Matt Damon as Scott, and a big part of the film’s success is due to the two actors playing the leads: one a man who had to work his way into show business, and the other a man born into Hollywood royalty. Behind The Candelabra tracks the torrid, doomed love affair between one of the world’s best-known entertainers and a shy young dog-trainer, but while the actors play the romantic desire between these two, they also play the materialistic desire: how it feels to be allowed through the bejeweled doors of a millionaire’s mansion. Soderbergh and LaGravenese go deep beneath this voyeuristic fascination with wealth, fame, and the secret lives of celebrities. The homosexuality is just another wrinkle to that same cloth, given that when Behind The Candelabra takes place, Hollywood’s gay subculture was yet another members-only affair.

Soderbergh has nearly always treated even the most sensationalistic material in his films with a calm remove, which is right in step with the house style of HBO, a channel known to make brothels, drug dens, and battlefields look classy. But Behind The Candelabra is also one of the most stylish movies Soderbergh has made in years. This is very much Scott’s version of the story, so Soderbergh employs subtle and overt subjectivity in his camerawork, whether he’s using a shaky, bleary image to convey Scott’s descent into paranoia and pill abuse, or framing Liberace as a magnificent jewel that Scott can touch, but not pocket. The second half of Behind The Candelabra is a wallow in romantic dysfunction and drug abuse—a bit of a letdown after the zippy first hour—but the movie always stays attuned to Scott’s feelings of longing.

Where the second hour is most effective is in showing how Scott and Liberace’s relationship reaches a stage where acrimony is their default mode. Behind The Candelabra depicts the many ways through which the impossible becomes commonplace, until the couple inevitably winds up in litigation, trying to explain to the legal establishment a relationship in which Liberace intended to adopt Scott as his son while still having sex with him. Throughout, Soderbergh and LaGravenese keep their eyes on the money, which for these characters exists as a reward, a way of keeping score, and a tool that allows them to build a world apart from the one in which being themselves wasn’t an option.

The lone special feature on the Behind The Candelabra DVD and Blu-ray is a 15-minute HBO-produced behind-the-scenes featurette, of the flatly promotional variety. Nearly everybody involved with the production is interviewed—aside from Soderbergh, curiously—and while they don’t say anything especially revelatory, it’s telling how LaGravenese, Douglas, and Damon all zero in on how Scott and Liberace became like an old married couple, harboring resentments that eventually made their every moment together torturous.