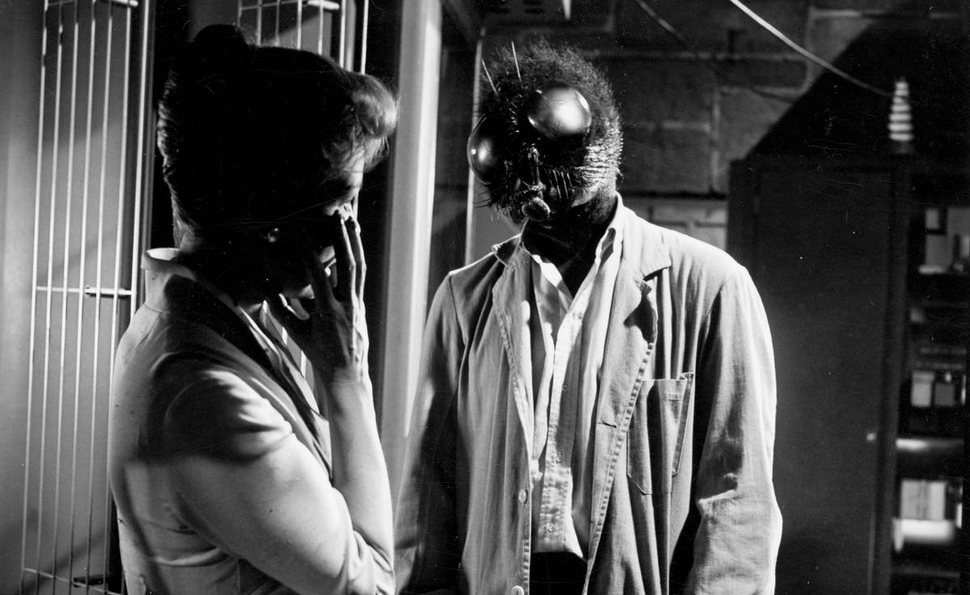 When David Cronenberg remade the classic 1958 film The Fly in 1986, he was hailed for fusing body horror with old-fashioned science-fiction, making the former more accessible, and the latter more terrifying. But the original Fly was hardly devoid of shock. One of the most famous moments in the first Fly comes when scientist’s wife Helene Delambre (Patricia Owens) pulls off the sheet her husband Andre (Al Hedison) is wearing over his head. While testing his experimental teleportation device, Andre fused his atoms with a passing housefly’s, and when Helene gets tired of how the hybrid Andre/fly is hiding his face, she removes his cover and screams at his enormous, twitching fly-head, all hairy and grotesque. It’s one of the most disturbing images ever to appear in a mainstream Hollywood studio picture.

The 1958 The Fly is itself something of a hybrid. Not exactly a B-movie, The Fly was shot in CinemaScope and Technicolor, helmed by veteran genre director Kurt Neumann (making one of the last films of his nearly 30-year career), written by future bestselling novelist James Clavell (adapting a George Langelaan story that originally ran in Playboy), and features supporting performances by well-known character actors Vincent Price as Andre’s weaselly brother François and Herbert Marshall as police Inspector Charas. In the late 1950s, there was such a boom in science fiction and horror that the studios were willing to throw some actual resources at genre fare, which is how The Fly could have scenes set at a ballet and in and around a well-appointed mansion, rather than in the gray apartments and featureless laboratories where these kinds of stories usually played out onscreen.

But what most distinguishes The Fly today is its unusual structure, another hallmark of a movie aiming for a smidgen more sophistication than the common rubber-monster picture. Helene tells the story of Andre’s folly in flashback to Charas, but it takes almost half an hour before the film even reaches that point. Before then, The Fly is a slightly cockeyed version of a domestic melodrama, with François fretting over his sister-in-law as she waits to be arrested for murdering Andre and spends her days hunting all over the house for a tiny, white-headed fly. Even when Helene starts explaining how her husband ended up squished to death in a hydraulic press, the story starts calmly, with her describing how excited Andre was by his technological breakthrough. Then come the little glitches: a china plate with its label printed backward; a cat that disappears; a hideous fly-man.

The Fly can be pretty dry, taking its cues from the pompous Andre, who talks about how his teleporter can make it so “humanity need never want or fear again.” But that’s what makes the shocker scenes in The Fly such a smack on the head. As the mutated Andre begins to lose control of his limbs and his will, Neumann contrasts the opulence of the scientist’s surroundings with the repugnance of of his new body. And when the story finally catches back up to the present, it becomes even more horrific, peaking with one of the other most famous moments in the film, when the Delambres finally find their white-headed fly, which squeaks, “Heeeelp meeee…” The Fly is a study in how the boldness of new discoveries is compromised by science’s need for precision, but it’s also a nightmarish tale of a comfortable little family, and a nagging little buzz.

Carrying over some features from an earlier DVD, Fox’s Fly Blu-ray includes a one-minute snippet of a Movietone report on the movie’s première, and a breezy 10-minute look at the origins of The Fly and its sequels, as well as the full Vincent Price episode of the TV series Biography. But the major extra is a commentary track by Hedison and film buff David Del Valle, who reminisce about the making of the movie, crack jokes about its cornier aspects, and then marvel anew at how unsettling it can be—taking it all in the spirit in which it was intended.