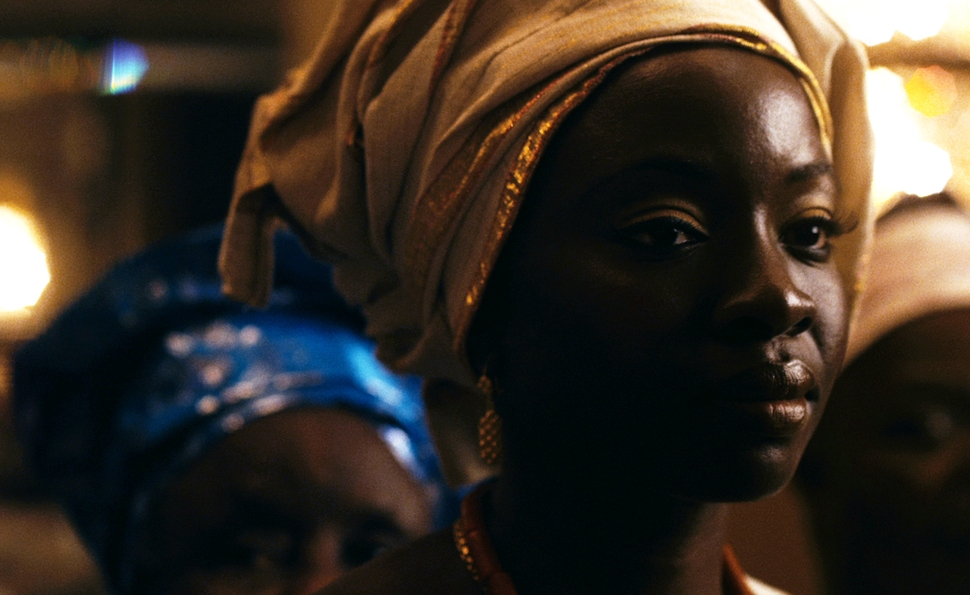 Mother Of George, the second narrative feature from Restless City director Andrew Dosunmu, opens with a beautiful traditional Nigerian wedding staged in the heart of Brooklyn. There, Adenike (Danai Gurira, best known for her work on The Walking Dead) marries Ayodele (Isaach De Bankolé), a restaurant owner who’s brought her over from Africa. As part of the ceremony, Ayodele’s mother—called Ma Ayo, played by Bukky Ajayi—tells Adenike, “You and your husband will not know suffering, will one day sit and relax the way I am, and enjoy your children the way I am enjoying you now.” It’s a blessing, but Adenike already understands it doubles as a directive.

The wedding sequence captures all that’s remarkable about Mother Of George, offering a procession of colorful clothes and stirring music, creating a sense of a larger community, but keeping a tight focus on the faces of those at the center. It’s sumptuous, but also moving. Even before the film has given its characters a proper introduction, the leads convey how much of their hopes for future happiness are tied up in the marriage, and how deep their affection for each other goes, even this early in their relationship. It also conveys the expectations surrounding them: They’ve been tasked both with keeping the traditions of Nigeria alive in their transplanted community, and with keeping that community growing. The title refers not to a flesh-and-blood child, but the son Adenike is told she will have.

Ma Ayo is less subtle with her expectations than anyone else, and once 18 months have passed, her pressure turns into outright hostility, with suggestions of taking desperate measures. Perhaps Ayodele could take another woman, though if their problems with conceiving lie with him rather than her, as Adenike suspects, that wouldn’t solve the problem. So Ma Ayo privately makes another suggestion, one that would require a tremendous act of deceit and the cooperation of Ayodele’s younger brother Biyi (Anthony Okungbowa). It’s an impossible choice, but it’s also only one instance in which Adenike finds herself pulled in two directions. She knows doctors might help her conceive, but Ayodele’s pride and adherence to tradition keeps him at home. And even if he did go, they might not be able to afford it without the money she provides from her job cleaning houses, a job her husband doesn’t want her to have. Then there’s her friend Sade (Yaya DaCosta), who’s embraced American dress and other American values and seems determined to make Adenike embrace them as well (and who, without Adenike’s knowledge, is carrying on an affair with Biyi).

Dosunmu has a background in photography, and he works here with the gifted cinematographer Bradford Young (Ain’t Them Bodies Saints) to create one striking image after another, mixing deep shadows with vibrant colors and using a shallow depth of field to place characters against backgrounds that look almost like pieces of abstract art. He takes a daring approach to staging, too, sometimes letting whole conversations play out while only showing one character’s face, making one set of reactions carry all the weight of a scene.

In some scenes, the approach becomes spellbinding. In others, excessive. The film shoots Ayodele ascending the steps to the doctor’s office, for instance, with ominous touches that suggest an ascent to the gallows. When so many scenes are freighted with portent, one moment doesn’t feel any more significant than the last. At times, it seems like Dosunmu is attempting to overcompensate for the thin patches in the script by playwright Darci Picoult. As unusual as their situation is, nothing the characters do is ever surprising; one expected revelation and argument follows the other. Yet while some of the scenes feel contrived, the naturalistic performances never do. The drama plays out in lush  surroundings, a world unto itself in the middle of modern New York, but struggling not to get lost there. For Adenike, that struggle might exact too high a cost.