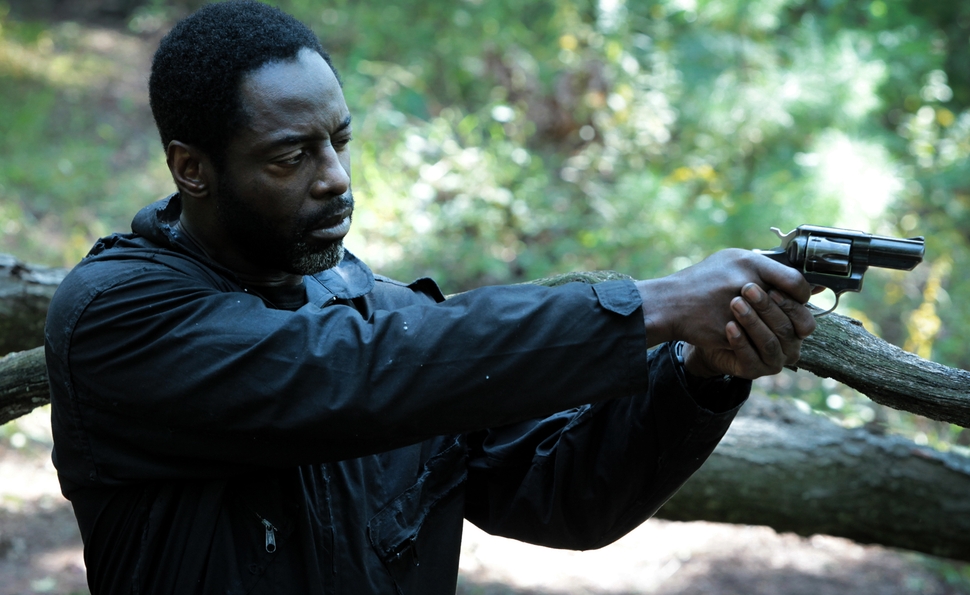 For nearly three weeks in October, 2002, John Allen Muhammed, an ex-army sergeant, and Lee Malvo, a 17-year-old boy who looked up to Muhammed as a father, subjected Washington D.C. and its surrounding areas to a series of sniper shootings directed at random targets. They claimed 13 victims—10 fatalities and three survivors—but the number increases when shootings leading up to their arrival get factored into the tally. The feature-film debut of Alexandre Moors, a French-born director with extensive music-video experience, Blue Caprice dramatizes Muhammed and Malvo’s spree killings, but its scope stretches much further. Moors places a carefully edited selection of news coverage over the opening credits, but it takes much of the film’s running time to return to the crimes themselves, which the film portrays chillingly but concisely. Working from a script by fellow first-timer Ronnie Porto, Moors is less concerned with what happened along the D.C. Beltway than how it happened, what brought two lost people together, and why they took to terrorizing a city with carefully chosen shots fired from a sniper station carved into the trunk of the titular blue Chevrolet. It finds no clear answers, but that suits both the horrific event and this haunting, elusive film.

Moors opens Blue Caprice in Antigua, well before the shootings, though it still feels like a story in progress. There, John—the film gives no last names, and compresses and embellishes some of the story’s facts—is enjoying a vacation with his children. They’re shadowed at times by Lee (Tequan Richmond), a quiet, lonely boy who, having been left behind by his mother, soon joins them. Looking like a doting father, John treats his kids tenderly, the only off note being some vague talk about them being on a vacation their mother can never know about. He treats Lee tenderly, too. When John learns Lee has no further family, he asks, “What are we going to do with you, huh?” Later events reveal the sinister implications behind that line.

In a remarkably controlled performance, Isaiah Washington, who also produced the film, steps into the shoes of a monster to play John. John doesn’t often wear his monstrousness on the surface, however. He returns from Antigua with Lee in tow, and picks up where he left off with a girlfriend (Cassandra Freeman). John smiles a lot, but sometimes his anger slips through the cracks, and sometimes he talks about a vague “them” that’s out to get him. At times, his “them” are the imagined forces of his ex-wife, who keeps his children away from him, but he also seems concerned with an even bigger, vaguer enemy, one he feels could be taken down with the right approach and the right tools.

Unfailingly quiet and polite, Lee becomes a recruit in what was previously a one-man war. After they set up shop with a fellow gun enthusiast (Tim Blake Nelson) and his wife (Joey Lauren Adams), John and Lee start practicing their marksmanship and preparing to take action. In a monologue the film portrays twice, first in truncated form, then in full, John talks about civilization as a house of cards easily taken down by a few well-placed shots. It’s an unnerving moment, both for the way Washington delivers it—in the cadences of everyday speech, but with maniacal undertones—and for how the events that followed at least partly proved him right. When simply shopping or filling up a gas tank can be life-threatening, the idea of civilization starts to break down.

Moors doesn’t put too fine a point on this. One of the film’s great strengths is that it doesn’t put too fine a point on anything. Shot at a chilly remove and with a remarkable command of powerful, seemingly offhand compositions, Blue Caprice captures Lee’s thralldom to John mostly by placing him always at his side, looking on politely as John talks to others. Richmond has little dialogue, but conveys much without speaking: his gratitude at someone paying attention to him, his devotion to his adoptive father, the way that devotion tips over into fanaticism, and the toll it takes on a kid who’d previously given no thought to killing anyone, much less cold-bloodedly shooting people he didn’t even know. The film also captures the feel of those early days of the war on terror, one in which some bombing or another dominated the nightly news, and revenge became a nationwide state of mind. When John and Lee approach D.C., Moors uses a long, hypnotic, rainswept shot that makes their arrival feel like trouble descending on an already-troubled place. And though the film shows how they got there, step by step, it removes none of the horror. Sometimes the truth provides no comfort.