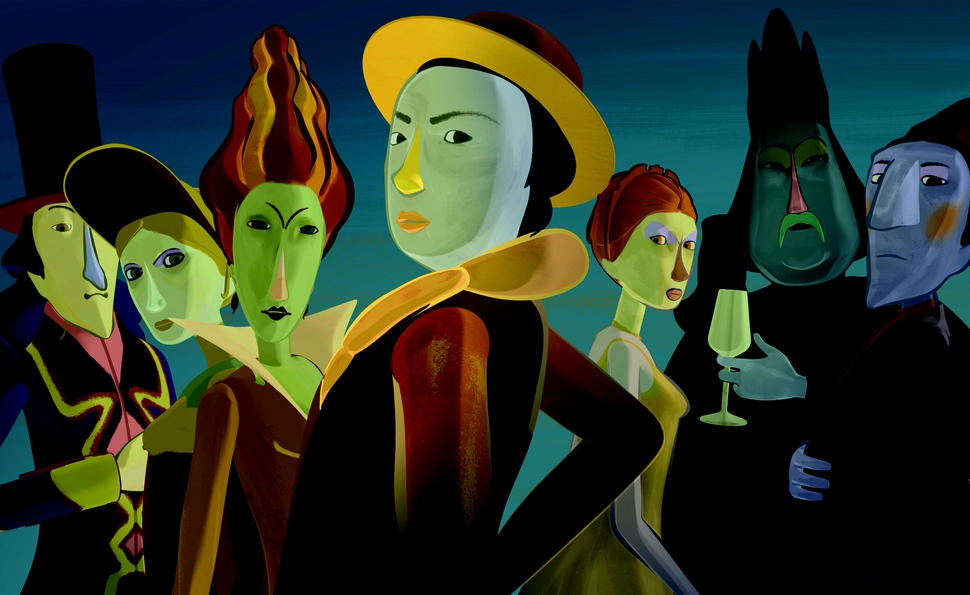 Jean-François Laguionie’s The Painting is heavy-handed, but within reason, since the veteran French animator is making a children’s film about prejudice and religious faith, subjects that don’t lend themselves to subtlety. In The Painting, Laguionie and screenwriter Anik Le Ray tell the story of Lola and Ramo, two painted figures fed up with the rigid caste system on their unfinished canvas, where the completed “Alldunns” lord it over the less-defined “Halfies,” while everybody’s revolted by the “Sketchies.” Alongside a resentful Sketchie named Quill, Lola and Ramo make their way to the edge of their artwork—past the giant flowers that are rumored to swallow up little painted people—and push through to The Painter’s studio, where they enter other canvasses and learn about the larger world of their creator’s imagination. They discover war, lust, vanity, history, whimsy, terror, and abstraction. And all the while, they ask: Why did The Painter make us? What does he think of us? Are we actually equal in his eyes?

The Painting may be too mature for younger kids, because of some nudity (of the sort found in museums), and because the main characters’ concerns are fairly esoteric and adult. But The Painting may also be too simple for grown-ups, with its Sneetches-like depiction of bigotry, and its one-dimensional characters pondering why their creator has abandoned them. But for those able to overlook the obviousness, The Painting is both beautiful and affecting. As Lola and Ramo talk to characters from other paintings, and pick up some fellow travelers, they become invested in the story of their Painter, who left behind a studio full of photos and sketches of people he may have known and loved, along with a room full of slashed canvases that seems to indicate some profound heartbreak. The half-complete heroes also begin to realize that with a splash of color, they have the power to create themselves, any way they’d like to be.

At its best, The Painting embraces the mystery—not just of what happened to The Painter, but of what makes a piece of art “finished.” Once Lola and Ramo leave the obnoxious Alldunns behind, The Painting becomes much livelier and more varied, with visits to a self-portrait instilled with The Painter’s self-hatred, and a forger who represents another aspect of the art world: the thieves and the hacks. It all builds to a moment when the animated Lola ventures out of the studio and onto a grassy live-action beach, to have a talk with her maker about the different layers of representationalism, and whether they stop with the man holding the brush, or extend out beyond even him. Pretentious? Sure. But when combined with Laguionie’s colorful, painterly animation, the question is suffused with powerful import.

In addition to the (highly recommended) option to watch the film in the original French, GKids’ DVD/Blu-ray combo-pack includes a slideshow of Laguionie’s concept art, along with a half-hour featurette in which Laguionie walks viewers through those sketches, talking about the challenge of matching the characters as he imagined them with body types, wardrobe, and environments that wouldn’t distract the viewer. The featurette also gets into the technical aspects of animating on computers, through conversations with Laguionie’s team of artists and engineers. Of particular fascination is how they shot the big finish, where Lola meets her creator in the real world. It’s astonishing, what it takes to fill an empty space with the illusion of life.