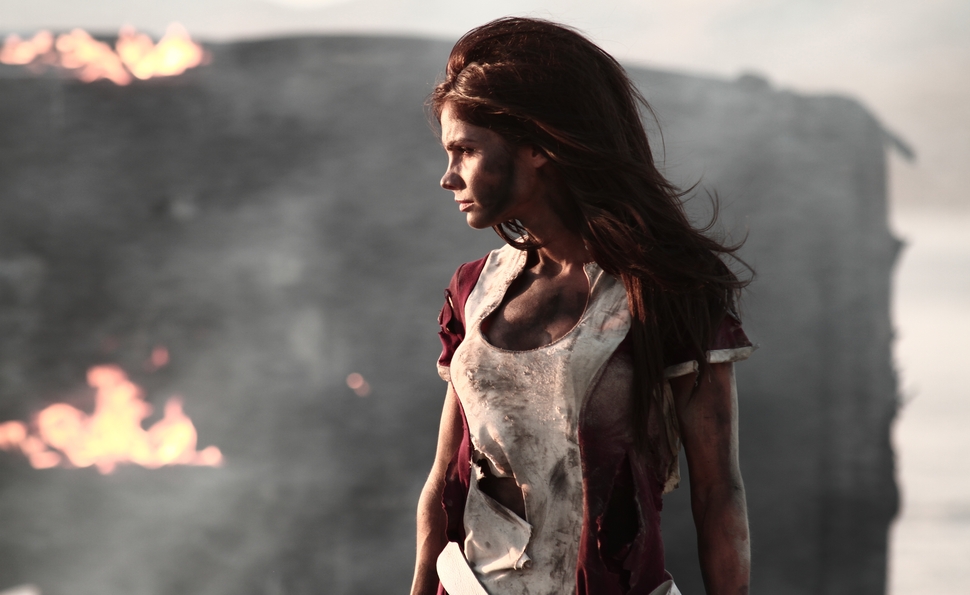 Imitation is everything in Bounty Killer, a post-apocalyptic actioner with a leading man who looks like Gerard Butler, a milieu and costume design straight out of The Road Warrior, and flashy direction of the sub-Robert Rodriguez variety. Henry Saine’s shoot-’em-up is also a commentary about the destructive greed of—and working-class anger at—corporate America, which in this futuristic tale has devastated the country. Now little more than barren desert and smoldering metropolitan ruins, thanks to a cataclysmic war between big businesses, the country is a wasteland overrun by gangs, and policed by a council of nine who employ “Bounty Killers” to hunt and assassinate any and all remaining suit-and-tie cretins.

The best of the Bounty Killers was, at one time, Drifter (Matthew Marsden), a scruffy hunk whose smirky confidence and no-nonsense toughness comes across as a Butler impersonator doing Mel Gibson. In the Bounty Killer hierarchy, however, Drifter has fallen below Mary Death (Christian Pitre), a drop-dead brunette badass who wears skimpy dresses, garters, and knee-high boots, and who uses enormous phallic guns to mow down her targets. She’s a walking fanboy fantasy of sex and violence, and Saine drools over her with every pan up her legs and lingering shot of her ass.

Bounty Killer’s horndog attitude toward its female protagonist is in keeping with its generally childish tone, in which murder is gory—when Mary decapitates an adversary with her boots’ spurs, the camera makes sure to capture the geyser of neck blood—and played for cheap visceral thrills and laughs. There’s no gravity to these proceedings, just a tongue-in-cheek celebration of killing that’s amplified by Saine’s direction, full of CGI-ified effects and POV shots (including one from the perspective of a launched rocket) that are superficially showy, but express nothing more than juvenile excitement over brutality and sassy banter.

Still, the film’s lack of seriousness isn’t the problem; rather, it’s that its jokey carnage is all caricatured poses devoid of original verve or legitimate wit. Having been served with a death warrant, Drifter tries to avoid being killed by Mary while striving to clear his name, but this nominal plot is just the flimsy foundation for a series of prolonged, tiresome firefights pockmarked by lame one-liners. So flat is the action—which also involves some gypsies in skeletal face-paint led by a queen played by rapper Eve, and Mary having a heart-to-heart with a brothel madam played by Beverly D’Angelo—that even the appearance of Gary Busey as some ill-defined corporate baddie goes nowhere. Bounty Killer is far too consumed with lasciviously gazing at Pitre to generate any unique gonzo-gruesome energy.

Sporting a ridiculous parted-down-the-middle hairdo, Kristanna Loken (of Terminator 3 and Bloodrayne “fame”) eventually turns up as the material’s true villain, but her wooden performance does little more than underline the film’s campy cruddiness. Saturated with secondhand look-at-me aesthetics—and lowlighted by an early Sin City-style shot of a cigar-smoking, roof-dangling Pitre set against a shining moon backdrop, and a late slow-motion panorama of the heroes mowing down henchmen to the sounds of generic soul music—Bounty Killer proves a derivative science-fiction saga with even less flavor than the characters’ rare favorite beverage, Pabst Blue Ribbon.