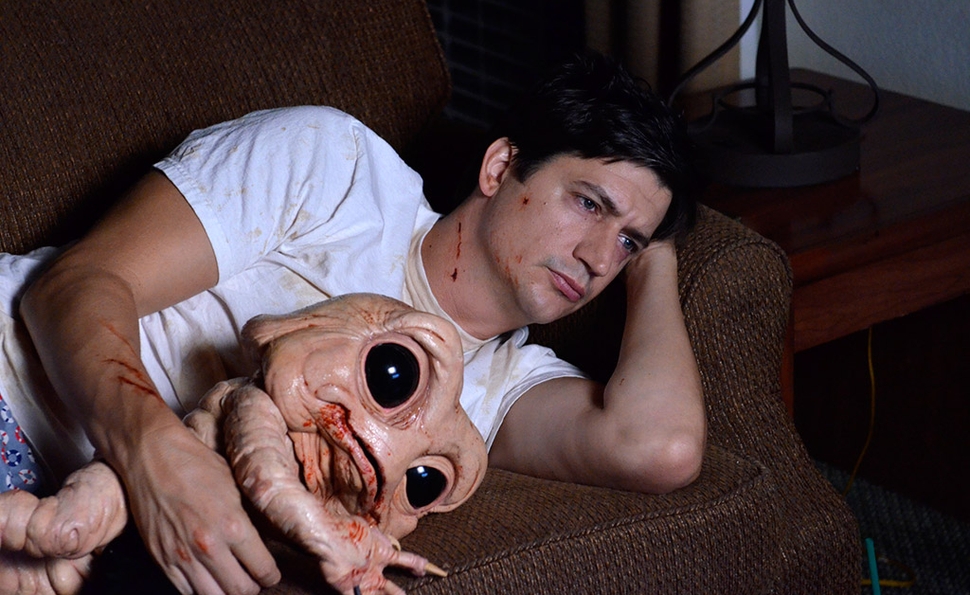 Ken Marino has the face of a soap-opera star and the build of an aging athlete. Since his breakthrough as part of the comedy collective The State, Marino has distinguished himself as a fearless physical comedian whose body is his instrument, but he’s never had a part as demanding or seemingly impossible as the one he plays in the crafty new horror-comedy Bad Milo!

Marino’s role in Bad Milo! is as challenging in its own way as awards-friendly roles in which actors lose enormous amounts of weight to play drug addicts, cancer patients, or the terminally ill. Yet it’s safe to say that Marino’s assured, moving, utterly convincing performance will be passed over during awards season, given that he plays a tormented man with a simultaneously creepy and adorable monster living inside his ass. Any actor who can generate real pathos out of a scene where his character is torn between devotion to his family and his fear that the supernatural creature in his rectum will destroy them has some powerful mojo working.

Marino stars in Bad Milo! as Ken, an earnest, well-meaning young accountant with big problems. He’s wracked by persistent gastrointestinal pain, and anxious about starting a family with his wife, Sarah (Gillian Jacobs), out of fear he’ll fail his progeny the same way his father failed him. Ken’s crippling neurosis eventually manifests in the form of the title character, a creature of pure id who resembles a fetal version of E.T., or one of the gremlins, ghoulies, critters, and trolls that ran amok in 1980s horror-comedy franchises like Gremlins, Ghoulies, Critters, and Troll.

Life never stops beating down Marino’s hapless everyman, and eventually, his mind and body rebel, prodding Milo to take revenge on his enemies. In this respect, Bad Milo! is an unusually scatological variation on films about men trying to contain the monster within—a subgenre that encompasses movies about werewolves or The Incredible Hulk, which Bad Milo! winkingly references. But Bad Milo! is also metaphorically concerned with the anxiety men feel over both the prospect of becoming fathers and the physical act of childbirth.

Bad Milo! stacks the deck by surrounding its overwhelmed, traumatized hero with deplorable scoundrels put on earth to afflict him: sadistic boss Phil (Patrick Warburton, clearly treasuring the character’s unabashed, lip-smacking villainy); a weed-smoking asshole father (Stephen Root) who tries to pass off his selfishness as an enlightened form of spirituality; a mother (Mary Kay Place) who flaunts her kinky sex life with her much-younger boyfriend Bobbi (Kumail Nanjiani); and an obnoxious co-worker who shares Ken’s office inside a bathroom.

Yet Ken, ever the mensch, cannot respond to these headaches with rage, out of fear that stress will cause the monster to leave his body and murder one of his enemies. So instead, he responds to this avalanche of stressors by suppressing his anger until he’s a sad, weary shell of a man. Bad Milo! gets nasty laughs out of putting its overmatched hero through a gauntlet of comic humiliations, but it works just as well as a dark allegory about the way we handle our demons.

Bad Milo! was executive-produced by the Duplass brothers and co-written and directed by Jacob Vaughn, who previously helped edit Jeff, Who Lives At Home and Cyrus. Thanks largely to Marino’s frighteningly committed performance, Bad Milo! boasts a degree of verisimilitude and conviction on par with superior mumblecore efforts. That's quite an achievement for a sly little sleeper about a man whose gastrointestinal agony wracks up an impressive body count.