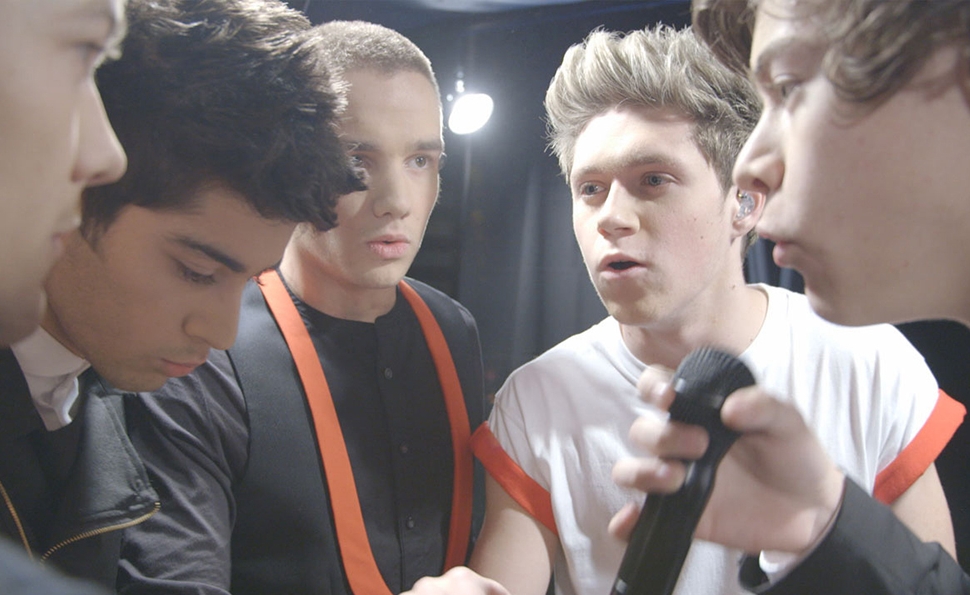 One Direction: This Is Us

Viewers are likely to enjoy One Direction: This Is Us roughly in proportion to their interest in seeing a shirtless Harry Styles. Or a shirtless Niall Horan, or a shirtless Zayn Malik, or a shirtless Liam Payne, or a shirtless Louis Tomlinson. The film plays no favorites when it comes to objectifying its well-coiffed, occasionally shirt-clad, unfortunately tattooed subjects; that’s for One Direction’s fans to do, in the form of be-glittered signs and homemade T-shirts supporting their favorite member of the British teen-pop phenomenon. The movie’s subtitle is as illustrative as they come: an uncomplicated, declarative statement that allows little room for deeper thematic meaning. This Is Us lays the One Direction guys out as slabs of meat on the altar of teen-pop fandom, giving them little more dimension than the cardboard cutouts and posters that decorate the bedrooms of their adoring fans.

And really, that’s okay. With few exceptions, concert films have historically been fan-only propositions, and the recent trend of interweaving glossy performance footage with pop-star commercials disguised as biography only pushes them further into that realm. One Direction: This Is Us conforms to the same template as 2011’s Justin Bieber: Never Say Never and 2012’s Katy Perry: Part Of Me, interspersing archival material (in this case, baby photos and footage of the group’s genesis as runners-up on the U.K.’s X Factor) with glowing testimonials from family members, managers, and breathless fans, and eye-popping 3-D performance footage shot at a record-breaking gig (in this case, six sold-out shows at London’s O2 Arena). But though it looks almost identical to the Bieber and Perry films, which were products of the same studio and production companies, One Direction is a rogue entity, distinguished, at least superficially, by its director: Morgan Spurlock.

While the man behind Super Size Me and an increasingly dire series of vanity projects disguised as documentaries initially seems like an odd choice to lovingly capture every publicist-approved move the One Direction boys make, it makes sense in practice: Spurlock knows pandering spectacle, and when allowed to engage in it free of any expectations of enlightenment or neutrality, he has as much fun as he can with the format. He stages the biographical portions’ requisite “spontaneous conversations” in laughably heightened settings, sending the boys off on fishing and camping trips to reminisce about how far they’ve come in the group’s three years of existence. And he squeezes what sympathy can be had from a chronicle of five impossibly rich 20-year-olds by highlighting the distance their success places between them and their families: The boys’ mums (and to a lesser extent, dads) play a supporting part throughout This Is Us, bemoaning the fact that they’ve seen their sons only a handful of days over the past two years, relying on long-distance phone calls and fan merchandise to keep their children in their lives.

But Spurlock and his film are at their best when they’re living in the moment, capturing spontaneous backstage horseplay and choreographed onstage spectacle. When they aren’t spouting PR bullet points for the cameras’ sake, the One Direction guys, Tomlinson and Styles in particular, can be disarmingly charismatic, and their immature brotherly interactions—which includes a lot of physical assault and pantsing—provide most of the film’s genuine laughs. But the real draw for non-believers—the only draw for them, actually—is the concert footage. 3-D concert films have become the 2010s’ version of the laser-light show, and in true Spurlock-ian fashion, the director takes the novelty one step further, pumping up the expected 3-D gimmicks—bubbles, lasers, confetti, etc.—with added visual flourishes: a little bullet-time here, comic-book overlays there, stylized lyrics popping out all over the place. It’s almost as if Spurlock thinks watching five runners-up from a British reality-competition show perform a cover of Wheatus’ “Teenage Dirtbag” for shrieking teenage girls isn’t entertaining enough on its own.

Even with all the SFX overlays, it’s questionable whether any of this is entertaining enough to sustain even a svelte 92-minute runtime, but Spurlock and the boys can’t be faulted for holding back. (In the entertainment sense, at least; there are several tabloid magazines’ worth of personal information glossed over in the name of not upsetting the movie’s target audience.) In making a feature-length infomercial for a musical entity that, by the band members’ own admission, is unlikely to exist after a few more years, perhaps the only way to go is big, bold, and unabashed. Subtlety and insight have as much place in this kind of film as a shirt has on the torso of a 20-year-old pop idol.

GoWatchIt: Buy. Rent. Stream One Direction: This Is Us