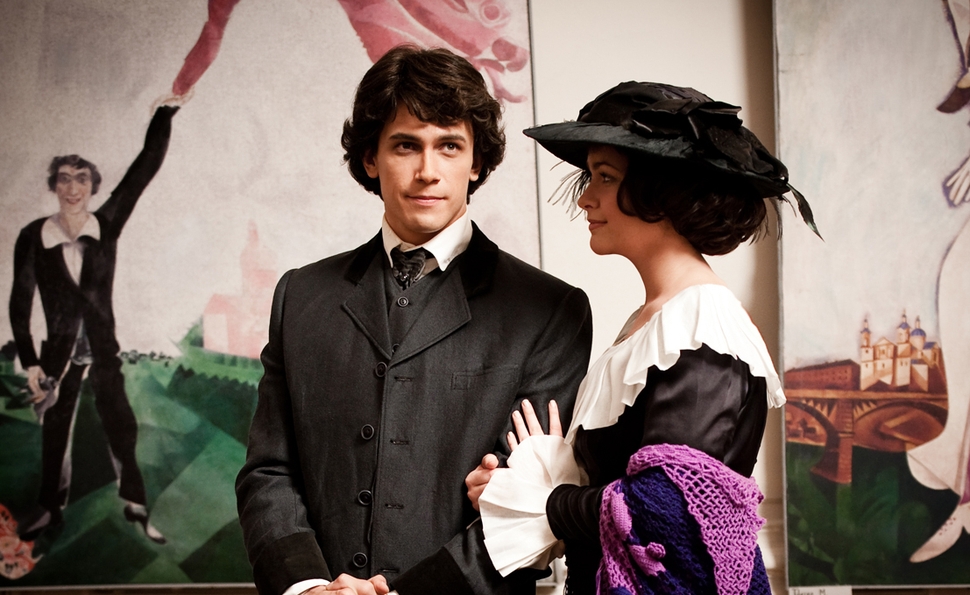 “Look at how interesting everything will be!” a breathless would-be student gasps as she enters the Vitebsk Arts College for the first time, determined to earn a spot in favored son Marc Chagall’s new art school, one built on the kind of big dreams that so often eluded the residents of what was then a small section of the Russian Empire. She gasps and coos over the new school, and though she marvels at how interesting everything will be, there’s not much to see. That’s oddly indicative of the problems facing Alexander Mitta’s Chagall-Malevich, which, though ambitious and creative, is unable to deliver on an early promise that it will be, at the very least, interesting.

The film—billed as a “folklore ballad”—weaves together fact and fiction to create a colorful and high-energy portrait of Chagall’s (Leonid Bichevin) attempts to build his beloved Vitebsk Arts College amid war and constant upheaval. Despite a sunny disposition and an artistic style that hangs on concepts like “love” and “happiness,” Chagall is plagued by outside forces, including a fellow idealist who’s obsessed with his wife, the constant threat of revolution, and an upstart artist whose own philosophies aren’t just dangerous to Chagall, but to the entire school. Kitted out with colorful and creative scenes that aim to depict Chagall’s dreamy, expressionist work within the film’s framework, Chagall-Malevich shoots high, though it often comes crashing down to Earth.

Chagall-Malevich opens in flames, as Chagall’s young mother labors to deliver him during a widespread ghetto fire that threatens to swallow up the predominantly Jewish-populated areas of Vitebsk. The child is born dead, limp and soundless, only to be revived by a healthy dunking in buckets of hot and cold water (sheets cut into strips are also present). The baby barely has time to catch his breath before the film’s fast-moving first act zips forward whole decades, dropping us in his Paris garret, a fly-ridden room where a naked Chagall attempts to put his lessons from the Académie de la Palette into action. Ever optimistic, the beloved artist happily attends to his art and rejects the advances of a pretty prostitute (a gift from his artist pals), making it clear that he only loves one woman.

The film’s then tosses Chagall back to Vitebsk, where he marries the love of his life, Bella (Kristina Schneidermann), and continues to keep up his dreams of making art for a living. It’s a wealth of material in a small package, but that energy grinds to a halt once Chagall hatches a plan to again return to Vitebsk and turn it into a haven for the arts. Despite the film’s title, fellow artist Kazimir Malevich (Anatoliy Belyy) doesn’t appear until Chagall-Malevich’s second half, only serving to further bolster the sense that Chagall’s plucky spirit and happy art don’t necessarily fit into the modern world, an idea that is pushed throughout the film.

The majority of the film’s tone and spirit seems better suited to the stage, and whole sequences feel pulled from some sort of never-launched theatrical adaptation of the material. At least Bichevin is perfectly cast, and the actor combines Chagall’s flair for over-the-top theatrics and giddy proclamations with an emotional center, and he stays grounded even when the character is (literally) floating above the action. Yet, for all his adoration and affection for art, Chagall is often unable to apply such emotion to the rest of his life, and Bella serves as both his compass and his ballast. As Chagall’s wife and muse Bella, much of Schneidermann’s work in the film is centered on clarifying the role of the artist’s partner, but the script (partially written by Schneidermann) doesn’t balk at giving Bella her own arc, and her relationship with ex-paramour Naum (Semyon Shkalikov) becomes more important the longer the film winds on.

Mitta struggles to marry the film’s melodramatic storytelling with its appreciation for dark and dreary history, and it frequently toggles between scanning as a downbeat war tale and something akin to Amélie or The Science Of Sleep. Whole sequences are noticeably colorized to play up the blue and yellow tones that are so often present in Chagall’s paintings. (It is unfortunate, however, how poorly those digital manipulations often look, overlit and muddy, and it’s often unclear if the film’s color is meant to look distorted or if the reel itself has been damaged; even viewed online, it’s difficult to get a read on.) Yet, Chagall-Malevich is at its best—and certainly its most inventive—when those sequences do work, particularly when Chagall and his family and friends start flying around the frame, a theme echoed in many of the artist’s paintings. A scene in which Chagall tries to explain inspiration to his students, one that sees him collapsing into a wheat field that instantly turns into a sky fall of stars, is the best the film has to offer, and Chagall-Malevich begs for more scenes like it. Those are the ones that soar.