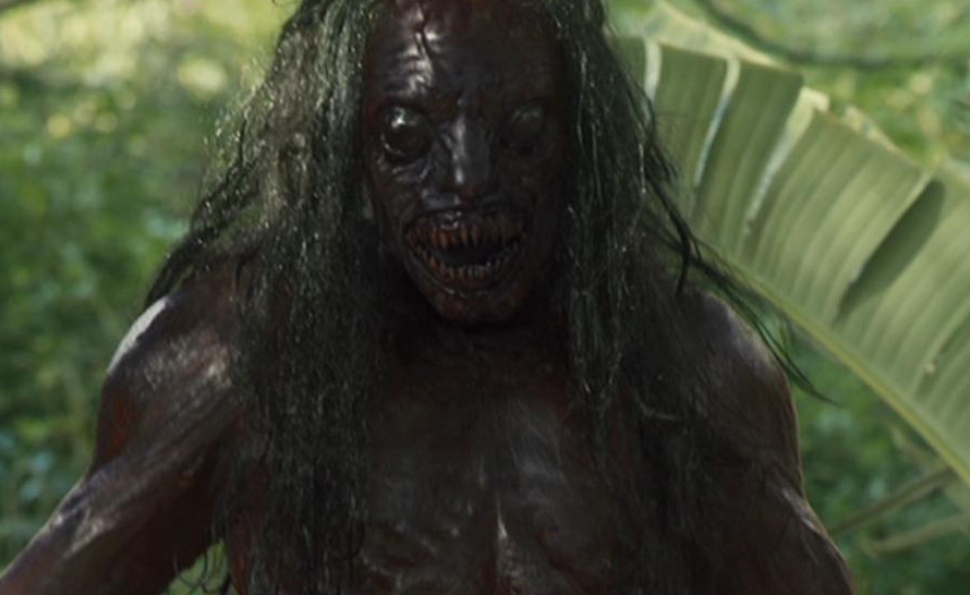 Surviving Evil’s villains are vampiric, shape-shifting zombie demon monkey-men who live in trees and love to dine on human fetuses, and yes, they’re just as ridiculous as they sound. Terence Daw’s horror film would like these fiends to be terrifying, yet the fact that the writer-director does everything in his power to avoid providing a clean look at them—save for one close-up that highlights their awful makeup—suggests that even he secretly recognizes the general silliness of his B-movie, which concerns a reality-TV crew who stumble upon these ancient, legendary beasts while filming their latest episode on a remote Philippine island. 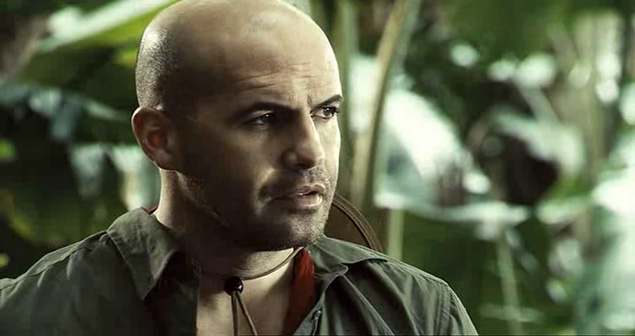 That wilderness-survival program is hosted by Seb, a self-assured outdoorsman whom Billy Zane embodies with his usual swaggering smirkiness. His over-the-top theatricality carries a pungent sense of irony, as if he’s self-consciously mimicking the arrogant-heroic mannerisms of ’40s adventure-serial stars. He’s the only character who seems to have a pulse throughout Surviving Evil, but his cocksure charisma is nonetheless toned down at every interval by Daw, who for baffling reasons chooses to relegate Seb—who eats bugs pried out of logs, and is handy with a machete—to second-fiddle supporting player, all so more time can be spent on his cipher companions.

Those include a personality-free cameraman (Colin Moss) and his jealous ex-girlfriend producer (Louise Barnes), a research student from the island (Natalie Mendoza), a tour guide (Joel Torre) with ulterior motives for making the journey, and a technician (Christina Cole) who’s secretly pregnant with Seb’s baby—which attracts the attention of the locale’s newborn-eating creatures. There’s considerable interpersonal drama between these dull-as-dirt dolts, but it’s so clichéd that it stymies any narrative momentum, and so dreary that it negates any chance for unintentional comedy.

Daw’s direction doesn’t help. Conversations are given pedestrian shot-countershot treatment, and his action is of an edited-to-ribbons, direct-to-video quality. That matches the camerawork, which is all whooshing, thrashing movement. While it’s hard to imagine any aesthetic polish elevating such Z-grade material, a bit more liveliness might have generated the levity necessary to at least make the film play as a breezy trifle. Instead, there’s a self-seriousness to Surviving Evil that clashes awkwardly with its technical clunkiness and endless mumbo-jumbo dialogue about the origins of its unholy terror.

That turns out to be the Spanish conquest and occupation of the Philippine islands, which was apparently so horrific, the indigenous culture reacted by spawning satanic monsters. Ones that attack their own people, no less. Daw isn’t after lucidity, much less any serious socio-historical commentary or reality-TV satire: He’s just interested in delivering a few shots of women in bikinis, a healthy serving of gratuitous gore, and a finale in which his hordes of baddies hunt their prey by sprouting wings and taking flight in a weird homage to The Wizard Of Oz. It’s all far less entertaining than it sounds.