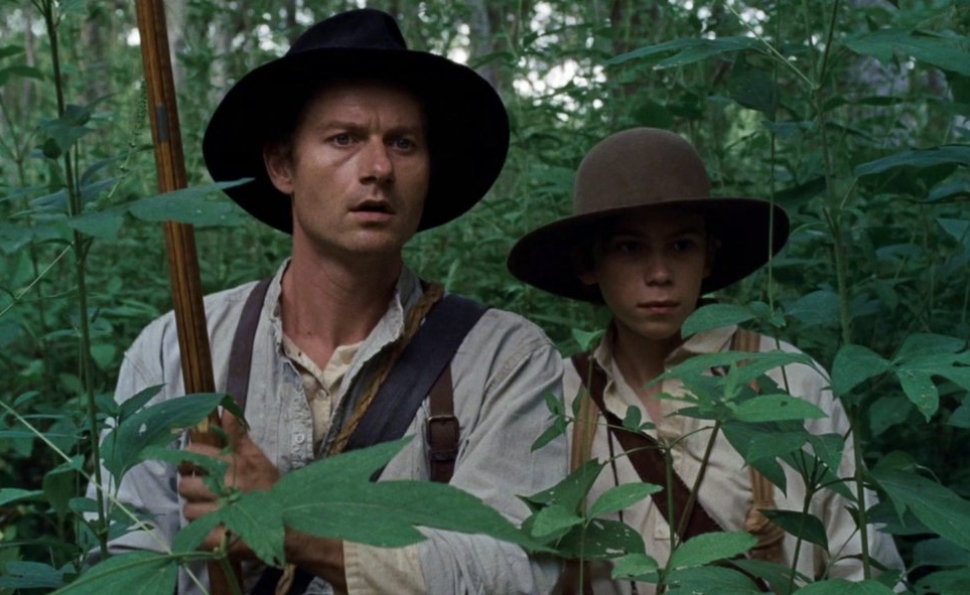 Echoes Of War begins at the end of its story, with a young woman running desperately through a field at night, pursued by a man. She arrives at a house engulfed in flames, at which point the title card appears, and the movie flashes back to depict the events that led to this moment. The grabby structure serves as a promise to the viewer: Stick with this slow-moving tale, and you’ll be rewarded with a conflagration. Few of those who persevere, however, will likely feel that the mildly violent climax was worth the wait.

Set in the South shortly after the Civil War, Echoes Of War stars James Badge Dale as Wade, a former Confederate soldier who shows up one day at the home of his brother-in-law, Seamus (Ethan Embry), to visit his sister’s grave and check in on his niece, Abigail (Maika Monroe, from It Follows) and his nephew, Sam (Owen Teague). Hard times have settled on the region during Reconstruction, and they’re being made harder still, Wade is aggrieved to learn, by the family’s neighbors, the McCluskeys, who’ve been stealing game from Seamus’ traps. Seamus has accepted the situation rather than provoke a feud, but Wade isn’t about to let blood relatives eat squirrels instead of wild boar, and he pays a subtly threatening visit to patriarch Randolph McCluskey (William Forsythe), which exacerbates the tension. Complicating matters further is the Romeo-and-Juliet romance brewing between Abigail and the nicest McCluskey boy, Marcus (Rhys Wakefield), who hates his family’s thieving, but is far too timid to stop it.

For a long time, this conflict seems like much ado about not a whole lot. Seamus and his kids aren’t starving, even though this has been going on for some time, and Wade seems angry mostly on general principle. It takes a while to become clear that Wade, who keeps suddenly snapping awake in the middle of the night, and who’s seen at one point moaning and holding his head with trembling hands, is meant to be suffering from post-traumatic stress disorder, long before that condition was given a name. Neither director Kane Senes (making his feature debut; he also co-wrote the script) nor Dale does much to foreshadow the revelation that Wade is dangerously nuts rather than a traditional righteous hero—he just abruptly crosses the line after more than an hour of mundane badass posturing. Most of Echoes Of War amounts to Hints Of Aggression, with the film struggling to find enough incident to reach feature length.

That might be because it began its life as a short film. Senes raised about $35,000 in late 2012 for a project called A Relative Stranger, which appears to be Echoes Of War. And he previously made a 28-minute short called “A Relative Stranger,” described as a Civil War story about a boy named Sam and his uncle Wade. More and more indie filmmakers have been expanding their shorts into features lately, and in most cases, like this one, the stretching involved is plainly evident. Senes has assembled a strong cast—Forsythe (Raising Arizona, Dick Tracy), in particular, makes Old Man McCluskey simultaneously imposing and sympathetic, not the cartoon villain he might have been on paper—but they can’t do much with the holding pattern of a narrative he’s handed them. Those first two minutes are as exciting as the picture ever gets.