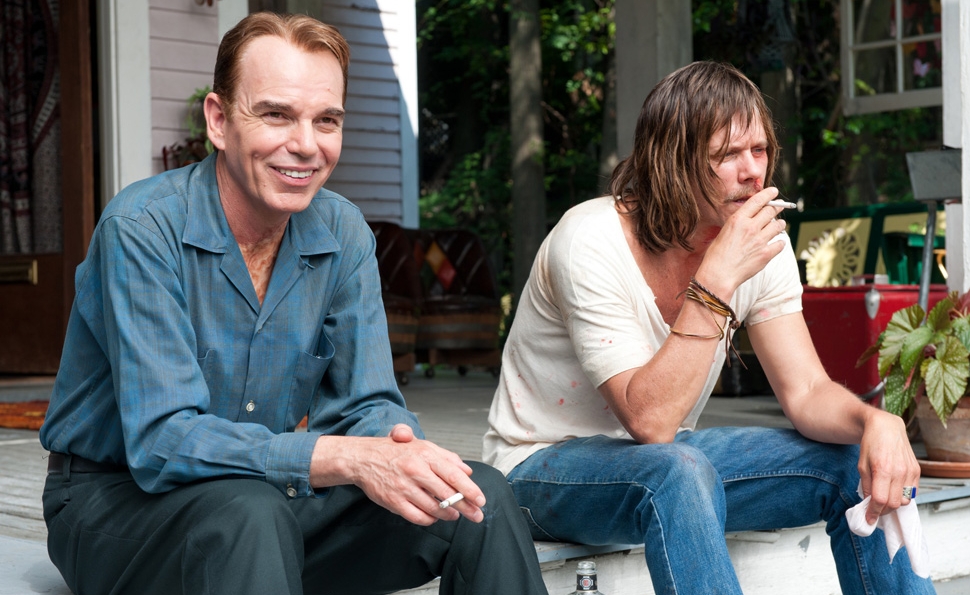 Nobody’s ever likely to confuse Billy Bob Thornton with Orson Welles, but the trajectory of his career behind the camera, as distinct from his career in front of it, still qualifies as a shame. Following the success of Sling Blade, Thornton directed a lyrical adaptation of Cormac McCarthy’s All The Pretty Horses, which Harvey Weinstein forced him to cut drastically from its reported epic running time of 3 to 4 hours. The result was unmistakably crippled—viewers who squinted hard could just make out the vague shape of something that might once have been remarkable—and the experience soured Thornton on filmmaking. He made one more quick movie, a year later: the flimsy, goofy comedy Daddy & Them, which went straight to video. And then he just gave up, expending his energy on acting, music, and crazy interviews.

Until now. Jayne Mansfield’s Car is the first film Thornton has directed in more than a decade, and it’s the first since 2000’s The Gift scripted by Thornton with his longtime writing partner, Tom Epperson. (They go back together to 1992’s One False Move, before Thornton’s acting career took off.) And the rustiness shows, frankly, because the movie is a big ol’ mess. Part culture-clash comedy and part sober anti-war tract, it veers among multiple clashing tones, and sizable chunks just don’t work at all. Nonetheless, it’s great to have these guys back, because Jayne Mansfield’s Car is also vital, ornery, and alive in a way that too few American indie features are nowadays. (Oddly, it’s being released by the Weinstein Company. Guess they made up.) The story’s overall trajectory is familiar, and sometimes clichéd, but it still has the power to surprise and startle from moment to moment, which is what really counts.

Set in 1969 Alabama, Jayne has virtually nothing to do with Mansfield, who was killed in a car accident in 1967. (The title comes from a scene in which several characters pay to get a look at the alleged vehicle in which she died.) Rather, it’s a freewheeling portrait of the Caldwell family, with an emphasis on closed-off patriarch Jim (Robert Duvall); his straight-arrow son Jim Jr., a.k.a. Jimbo (Robert Patrick); his hippie son Carroll (Kevin Bacon); and his just-kinda-weird son Skip (Thornton). Mom divorced Jim many years earlier and remarried an Englishman, Kingsley Bedford (John Hurt). When she dies, the whole Bedford clan flies to Alabama for the funeral, since she requested to be buried in her hometown—an awkward situation under any circumstances, and doubly so when it’s England invading the deep South in the 1960s. Everyone strives to get along for propriety’s sake, however, and some do more than just get along.

From that basic setup, Jayne Mansfield’s Car wanders all over creation, continually heading down unexpected paths. Skip, for example, takes an instant liking to Kingsley’s daughter, Camilla (Frances O’Connor); his method of courting her is to acknowledge that it’s too soon for them to have sex, then ask whether she’d be willing to get naked in front of him and speak in her English accent while he jerks off. That scene, and the subsequent scene in which she actually does it, are played for broad comedy… but they also lead, eventually, to an astounding scene in which she playfully asks him to return the favor, and he does so in a way that suddenly reveals the movie’s serious underbelly. Likewise, Thornton and Epperson carefully engineer a satisfying, crowd-pleasing ending—and ensure that it looks like the ending, to the point where half the audience at one screening got up and left. Then they tack on a jarring, yet strangely low-key coda that undermines every warm and fuzzy feeling the false ending engendered.

Even when it isn’t being subversive, Jayne revels in Thornton and Epperson’s abiding interest in people and their regional peculiarities. They have enormous fun with the simplest dialogue exchanges between the Brits and the Americans (“We couldn't possibly.” “Oh yes, you could possibly.”), and give old pros like Duvall and Hurt numerous opportunities to demonstrate their variant takes on crustiness. Again, it’s far from a perfect movie, or even a great movie—some of the anti-war material drifts across the line into speechifying, and Jim Sr.’s obsession with the fatally wounded (he monitors a police radio, listening for accidents) gets a mite heavy-handed. Most damagingly, the film as a whole feels fundamentally shapeless, more like a collection of anecdotes than a proper narrative. But there’s a raucous energy to its digressions that arguably has more value than crystalline structure. Jayne Mansfield’s Car should be seen, if only to ensure that another decade doesn’t pass before Thornton’s next one.