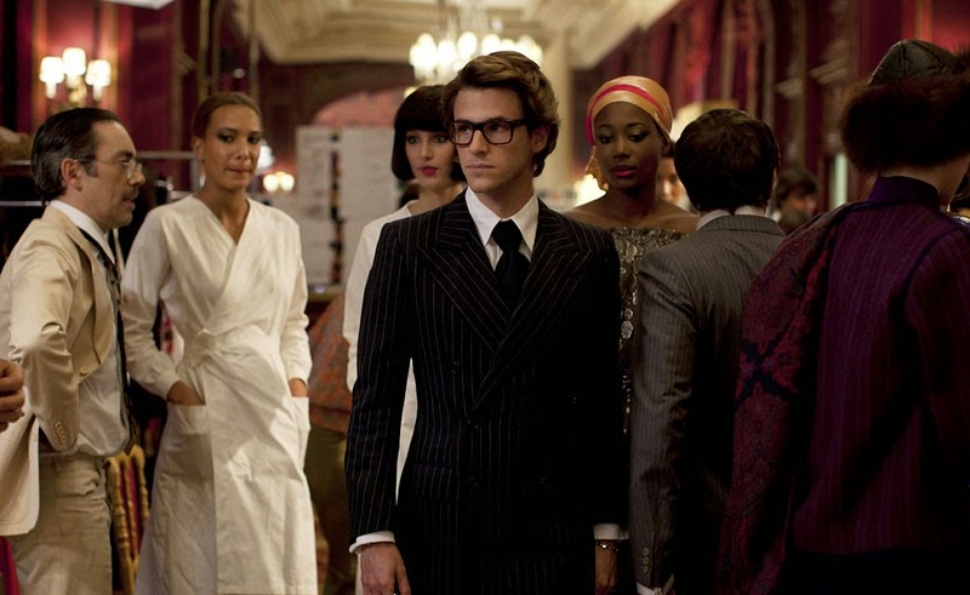 Another summer, another Yves Saint Laurent biopic. Nobody was terribly excited about last year’s model, which lived down to expectations. Still, there was reason for a smidgen of hope regarding Saint Laurent, since director Bertrand Bonello—whose previous film was the magnificently sensuous, decidedly unconventional House Of Pleasures—seems like the kind of artist who’d rather go naked than make Fur. Sure enough, Bonello avoids many of the genre’s most basic pitfalls, including facile psychoanalysis and the dreaded Wiki-checklist approach to a celebrity’s milestones. But he still fails to crack the toughest biopic nut of them all: how to shape a human life into a compelling narrative. His solution is to throw style at the problem—apropos, given the subject, but that move can only disguise a vacuum for so long.

One of the more welcome recent developments in the biopic genre has been a shift away from cradle-to-grave treatments in favor of a tighter chronological focus. Bonello (who wrote the screenplay with regular Jacques Audiard collaborator Thomas Bidegain) follows the trend, completely ignoring Saint Laurent’s childhood and skipping blithely past most of his early career. Even his apprenticeship with Christian Dior, which seems obligatory, gets no screen time. Instead, Saint Laurent opens with the designer (Gaspard Ulliel, who played Hannibal Lecter in Hannibal Rising) already a household name, and charts his professional heights and personal disintegration over the course of the 1960s and 1970s. There’s no special emphasis, as there was in Yves Saint Laurent, on his relationship with lover and business partner Pierre Bergé (Jérémie Renier). Indeed, there’s no special emphasis on anything—just a whirlwind of hedonism.

For a while, that’s amusing, at least. Bonello doesn’t appear to be interested in Saint Laurent as a person—Ulliel’s performance is little more than an enigmatic smile—and he’s almost aggressively unconcerned about clarifying important events for viewers who know little or nothing about fashion. The film highlights Saint Laurent’s spring 1971 collection, for example, but barely addresses the controversy it provoked. (Some felt the designs, a throwback to World War II-era fashions, glamorized the German occupation of France.) Nor does he explore Saint Laurent’s creative process. Mostly, he seems intent on capturing the mood of the era as refracted through someone who remains deliberately detached from it. The film’s wittiest and most striking sequence zips through the turbulent years of 1968 and 1969 via a split-screen montage that places newsreel footage on the left and runway models on the right, suggesting the mental gymnastics that must have been necessary to remain devoted to beguiling surfaces in a time of chaos.

Had the entire film committed to that vision, Bonello might have had something. But his mind wanders. He gets overly fascinated by Saint Laurent’s descent into drug abuse, which mimics the standard rock-star nadir so precisely that the movie turns into a tiresome episode of Behind The Couture. He keeps bringing on notable French actors—Léa Seydoux as model and fellow designer Loulou de la Falaise, Louis Garrel as another model with whom Saint Laurent has a frustrating affair—and giving them virtually nothing to do but pose. He devotes lengthy sequences to Bergé's business negotiations, which are fascinating in and of themselves, but contribute nothing to the overall structure. There is no overall structure, really. Toward the end, Saint Laurent suddenly starts cutting back and forth between the younger Saint Laurent and the final days of his life (with Helmut Berger playing the elderly version), and while the juxtaposition is poignant, transforming the film into a memory play, it feels like a Hail Mary bid for dramatic coherence, unsupported by anything that precedes it. Superficiality reigns here. Arguably, that should dominate a movie about a fashion designer. But fashion shows run 10-20 minutes, not two and a half hours.