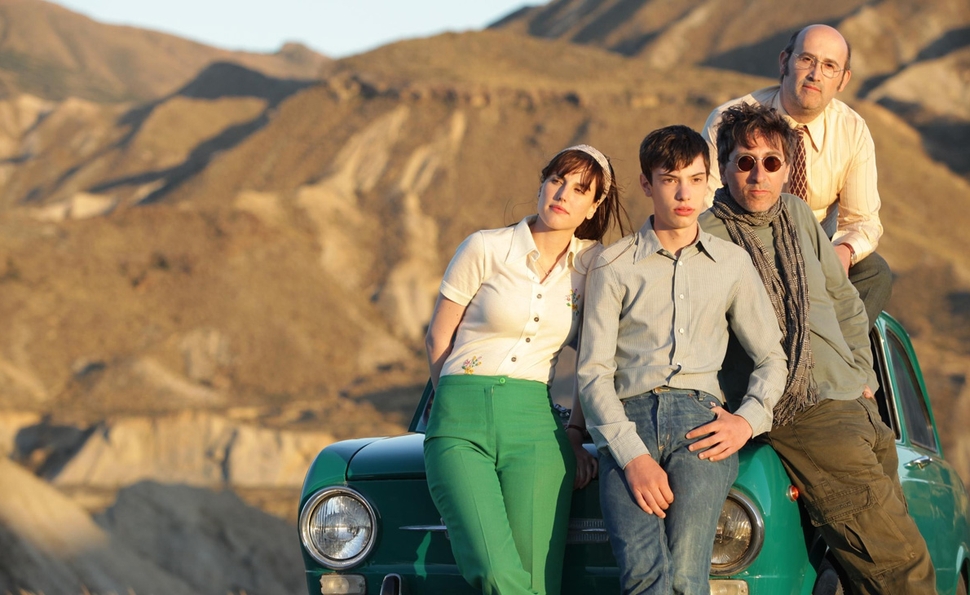 Living Is Easy With Eyes Closed

It’s always fascinating to see the stock footage filmmakers from other countries use to quickly evoke a particular era. For Americans, the 1960s are Vietnam, Woodstock, the moon landing, and The Beatles. For Spaniards, at least according to David Trueba’s Living Is Easy With Eyes Closed, 1966 is El Lute, the four hydrogen bombs the United States accidentally dropped on Spain… and The Beatles. The film puts a lot of stock in the band’s status as a universal cultural solvent, but Trueba mostly relegates both culture and character to the margins. That’s a shame, because although the film has some interesting things swimming around in its eddies, the main current—a self-consciously charming road trip in the vein of Little Miss Sunshine—goes nowhere slowly.

Living Is Easy With Eyes Closed, which took top honors at Spain’s Goya Awards (Best Film, Director, Actor, Screenplay, etc.) is set during John Lennon’s brief stay in Almería during the shooting of Richard Lester’s How I Won The War. It’s loosely based on a real incident in which a teacher who was using Beatles records as part of his English curriculum convinced Lennon to correct his transcriptions of the lyrics. Javier Cámara plays Antonio, an Eleanor Rigby-type—warming his meals on the iron that he keeps by the door, and so on—who sets out to find his idol. This poses certain tonal problems, because it means Trueba’s plot inevitably hinges on a bespectacled loner obsessed with meeting John Lennon. It doesn’t help that Trueba withholds the reason Antonio thinks it’s so important he and Lennon speak until late in the film, or that he cast Cámara, best known for playing the creepy nurse in Talk To Her. This sort of movie is always a little prelapsarian, but it’s difficult to watch Antonio linger outside the gates of Lennon’s rented villa, introduce himself, uninvited, to 3-year-old Julian Lennon, or dodge flowerpots thrown by Julian’s mother Cynthia when he sees her at a window. Or rather, it’s difficult to watch and still find Antonio as sympathetic as the other characters do.

It wouldn’t be a road-trip movie without a family, real or improvised, so along the way, Antonio picks up Belén (Natalia de Molina), a young woman fleeing the convent where her family has hidden her away during her pregnancy, and Juanjo (Francesc Colomer), a teenager who has run away to avoid getting a haircut. The unreliable yellow Microbus of Little Miss Sunshine has been replaced with an unreliable green SEAT 850, but the basic contours are familiar: through travel, the characters gradually come out of their shells and gain some measure of strength to deal with the problems they’ve fled. The Andalusian coast does a lot of the work here, photographed in dry yellows and vivid greens by Daniel Vilar (who also shot the last film from Trueba’s brother Fernando). Regrettably, a lot of the other work is done by the residents of Almería, all comical accents and wise monologues, just waiting around to test or instruct travelers.

There are moments around the edges of Living Is Easy With Eyes Closed where the film seems like it will go deeper than the surface of its Redemptive Pastoral template, but they don’t last. Cámara’s performance is excellent, suggesting a deep melancholy that’s only hinted at in the script. (Though Trueba too often undercuts this with reaction shots of the other characters being visibly moved or delighted.) Francoist Spain is there on the margins, too: Juanjo’s authoritarian father is a cop; the convent Belén escapes from is the kind of place where babies disappear. But these are grace notes—so when Antonio tells the kids, “Too many people live in fear in Spain, but you’re young, and you need to change things, damn it,” it feels unearned, a reaction to things that are barely present in the film. Trueba seems to be letting the title do a lot of the work, as though a line from The Beatles is enough to flesh out ideas the film only touches on. But it’s all wrong—that is, I think I disagree.

The DVD includes three deleted scenes, including one where Juanjo witnesses the fear and brutality of Franco’s Spain firsthand, as a “thief” on his bus is rapped with the butt of a rifle and dragged away. Also included is a four-minute glance at Pat Metheny and Charlie Haden recording the acoustic score in a Malibu studio. Trailers for this film and others from Strand Releasing round out the package.