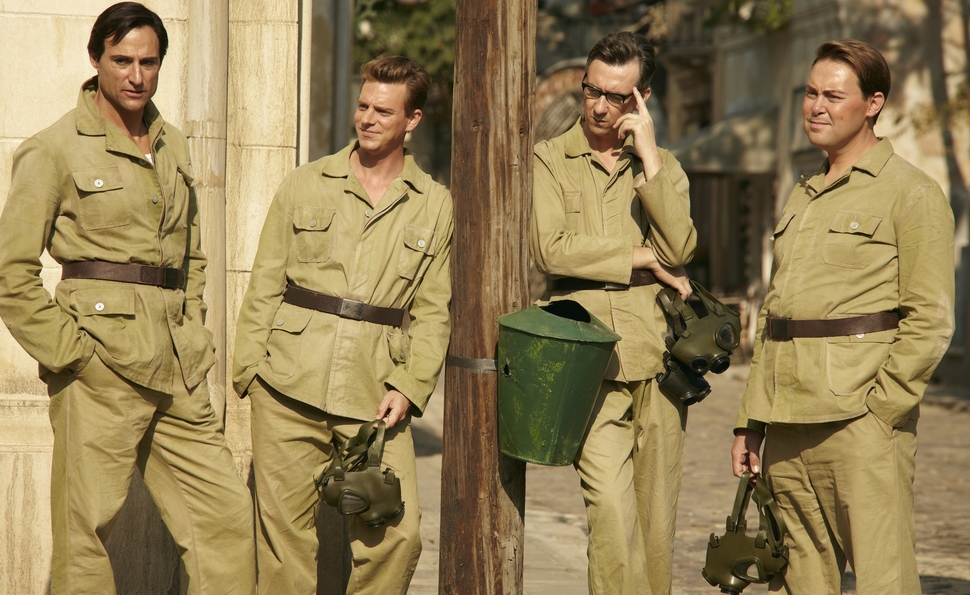 Closer To The Moon

Not long ago, Romania was the hot spot in world cinema, with a New Wave to call its own and a cartload of major festival prizes. But while its key directors—Cristi Puiu (The Death Of Mr. Lazarescu), Cristian Mungiu (4 Months, 3 Weeks And 2 Days), Corneliu Porumboiu (Police, Adjective), Radu Muntean (Tuesday, After Christmas)—are all still active and doing interesting work, the novelty has faded, as it always does. No cinematic New Wave ever formally dies, but when scholars look back years from now, seeking to retroactively determine the Romanian version’s terminus as a cultural phenomenon, they may well note the significance of Nae Caranfil’s 2013 feature Closer To The Moon, which is now belatedly receiving the U.S. release for which it appears to have been expressly designed. Reportedly one of the most expensive Romanian productions ever made, this historical docudrama features a primarily American and British cast (headlined by Vera Farmiga and Mark Strong) and is entirely in English, giving it a much more dubious distinction as perhaps the least Romanian movie ever to emerge from Romania.

The real-life story that inspired it is fascinating, though not to a degree that can sustain a two-hour movie. In 1959, six disillusioned Jewish members of the Romanian Communist party, the Ioanid Gang, committed a bank robbery, with no known motive apart from embarrassing the police state. After they were apprehended, the authorities either persuaded or coerced them into appearing as themselves in a propaganda film about the robbery, designed to depict the state as heroic and the thieves as inept. Caranfil takes this idea a step further by imagining that the Ioanid Gang confused onlookers by pretending that they were shooting an action movie. In this telling, the propaganda film’s cameraman, Virgil (Harry Lloyd, who played Viserys Targaryen on the first season of Game Of Thrones), was one of those onlookers. Thinking he’d seen a real film shoot, he was inspired to join the industry. Then he wound up assigned to the crew filming the state’s reconstruction of the very robbery he’d witnessed.

Structured in multiple chapters for no particularly good reason, Closer To The Moon is at its best late in the going, when it flashes back to show the Ioanid Gang—including Strong as de facto leader Max, and Farmiga as the sole woman, Alice—effectively planning the robbery as a suicide mission. Having embraced communism as a means of defeating the Nazis, they were horrified by the direction it took, despite holding positions of some prominence themselves; their heated arguments about what to do briefly give the film a pulse. Much less effective is the pseudo-romance that develops between Virgil and Alice, which clashes loudly against the ostensible black comedy of the re-enactments (in which the gang performs exaggerated gangster poses) and the more sincere drama, which turns downright anguished when Alice’s teenage son unexpectedly turns up at the robbery. Caranfil, who’s made several previous features in Romanian, struggles throughout to find the right tone, mostly in vain. There’s no way to know whether he was hampered by the need to go international, but the film’s general lack of authenticity certainly doesn’t do it any favors.