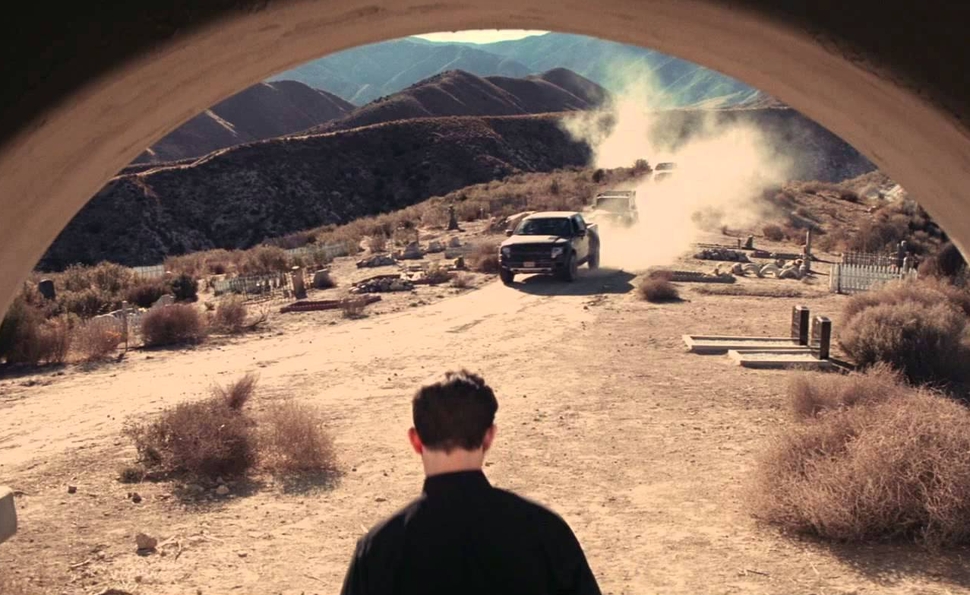 When a film opens with the legend “Somewhere near the Mexican border, 15 years ago,” it sets up certain expectations. Namely, that it’s going to reflect changing attitudes about national security pre- and post-9/11—otherwise, why be so specific about the timeframe? Also, any child actors it introduces will likely be supplanted in short order by more experienced thespians who look vaguely like them. Mostly, though, it signals that an inordinate amount of dialogue will consist of countless variations on “Remember when…” as the characters remind each other of things of which they’re already aware because they were both present when they happened.

True to form, the child actors give way to their adult counterparts about 12 minutes into Broken Horses, the U.S. debut of longtime Bollywood director Vidhu Vinod Chopra, and there’s plenty of “Remember when”-ing before all is said and done. However, with the exception of the pointed presence of a U.S. Border Patrolman in the film’s present-day scenes and one character’s ill-thought-out jaunt to Mexico to interview a drug lord about “border relations,” Chopra and co-screenwriter Abhijat Joshi fail to capitalize on what could have been a resonant theme about the ever-shifting realities of life in a border town. (Think John Sayles’ Lone Star, or better yet, the more recent Go For Sisters.) Instead, they’re content simply to transpose story elements from Chopra’s 1989 crime drama Parinda from Mumbai to the American Southwest (evocatively photographed by Tom Stern, Clint Eastwood’s go-to cinematographer) without much regard for whether they make sense in their new context.

The pileup of melodramatic clichés and bald-faced exposition starts right at the top with single father/respected lawman Gabriel Heckum (Thomas Jane, doing his best to imbue a character named “Gabriel Heckum” with gravity) getting shot dead on his own firing range by an unknown assailant right after his mentally challenged son Buddy reminds him he’s going to miss his other son Jake’s violin recital. That very night, the guileless Buddy is approached by local criminal Julius Hench (Vincent D’Onofrio), who shows him a photo of the “bad man” who killed his father, drops him off at the man’s house, and welcomes Buddy to “the family” after he puts a bullet in the man’s head. Then, before leaving the past behind, Chopra and Joshi thoughtfully give the freshly orphaned Jake and Buddy a reverse-Of Mice And Men moment as they flick matches into a wading pool and Jake glumly says, “Tell me about the ranch.” It’s as risible as it sounds, yet it’s only the beginning as far as Broken Horses is concerned.

Skipping forward in time, the story alights on the grown-up Jake (Anton Yelchin) trying out for the New York Philharmonic and being encouraged by his fiancée Vittoria (María Valverde, a Spanish actress playing an Italian for no discernible reason) to go home for the first time in years to see the brother who’s been supporting him by working as Hench’s well-trained attack dog. Heralding Jake’s arrival by tossing a lit match at him, the still-childlike Buddy (Chris Marquette) takes Jake to the one-horse ranch he has bought as a wedding present. Jake isn’t eager to move in, though, after a visit with his old music teacher, Ignacio (Sean Patrick Flanery, acting like he’s been airlifted in from a David Lynch film), who’s confined to a motorized wheelchair since his legs were lopped off by a vindictive Hench. Hench, meanwhile, is so intent on keeping Buddy at his beck and call that he dispatches one of his goons to kill Jake, who turns the tables on the gunman through sheer dumb luck. Jake continues to play dumb by not telling Buddy what happened—mostly because the man he killed was Buddy’s partner—and ducking calls from Vittoria, who’s over the moon with the news that he got the job, but is puzzled by his silence because “the Philharmonic won’t wait forever.” (Guess who eventually shows up at an inopportune moment.)

Try as they might to make sense of their characters, Chopra’s actors are unanimously defeated by the oft-embarrassing dialogue they’re given to recite. (Yelchin, in particular, spends most of his screen time with a pained expression on his face.) Lead-footed and predictable when it isn’t threatening to go off the rails—as it briefly does during Hench’s tension-breaking freak-out triggered by a glockenspiel rendition of “Twinkle, Twinkle Little Star”—Broken Horses lays on the heavy-handed symbolism so thick every action is freighted with significance that the flimsy cardboard cutouts populating it can’t support. By the time Hench is telling Buddy his brother is sick and needs to be put down because “the city bit him like a fox,” the point of no return has been in the rearview for a good long while.