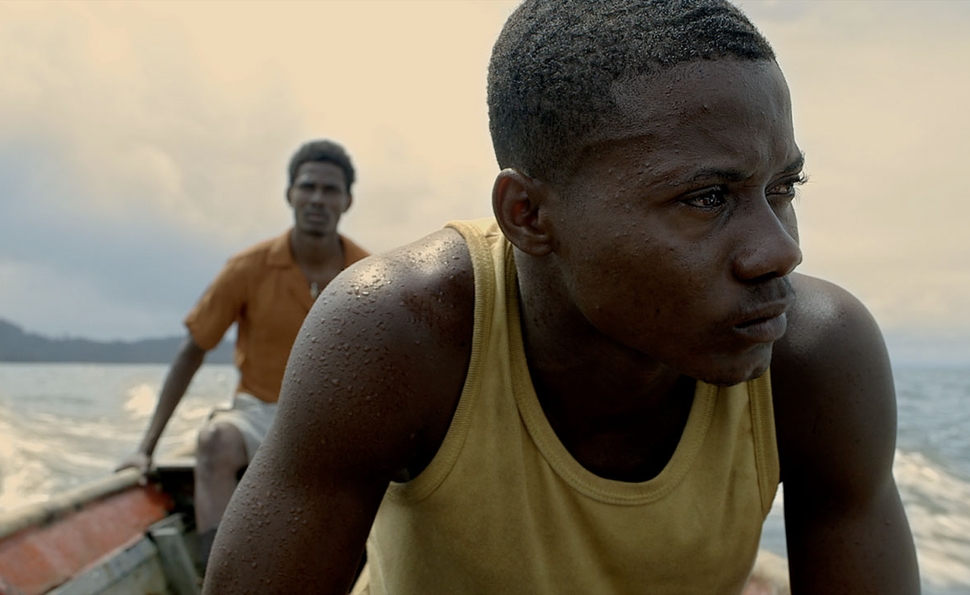 The surprises in the opening minutes of Josef Kubota Wladyka’s debut feature, Manos Sucias, aren’t major and aren’t underlined, but they come quick enough to suggest that Wladyka wants viewers a little off-base and ready to question everything. The opening shot of two people wearing black hoods and being transported through the Colombian jungle by gun-toting mercenaries isn’t the prisoner transfer it appears to be. A grim man glowering hatred at his drug-lord boss, then asking for permission to visit his son, also isn’t what it appears to be. When two young friends—one loose and playful, the other grim and serious—meet a low-level street boss for a drug-toting assignment, they set themselves up as buddy-opposite protagonists in the story, which they aren’t. And so it goes, throughout an opening act that keeps setting up expectations, then confounding them, all without significant pause, emphatic acting choices, or musical stings to goose emotional response. This is just day-to-day life, Wladyka implies: It doesn’t always operate around neat narrative clichés and known tropes.

It takes Manos Sucias (“Dirty Hands”) a while to get to the part of the story that does operate along familiar lines. Hardened drug-running foot-soldier Jacobo (Jarlin Javier Martinez) and softer, money-hungry newbie Delio (Cristian James Abvincula) both wind up on the same job together, piloting a boat towing a rusty old torpedo shell full of 100 kilos of cocaine north to Panama. When the boat’s in motion, the torpedo is submerged, making the group plausibly resemble ordinary workers headed to a job, or fishermen at sea. But while suspicious guerrillas and the Colombian navy are a danger, they wind up not being the primary problem on the unpredictable trip. Soon, Delio and Jacobo are on their own, debating whether they’ll be rewarded if they manage to faithfully finish the job, or executed at the end of the run for the ways in which it fell apart.

In some ways, Manos Sucias is a standard crime film of the “one error in judgment breeds endless escalations” variety, complete with some familiar motivations: Jacobo thinks this will be his last big job before he has enough money to get out of the drug trade, while Delio has a newborn child to support at home. As an added unlikely twist, it turns out they’re long-estranged brothers, which is more of an artificial twist than the film needs.

But Wladyka and his co-writer/cinematographer Alan Blanco spin the relationship out with a compelling and surprising tension, as Jacobo and Delio start to get reacquainted in a tense situation. The script throws them into the work, then into crisis, before pulling back and taking the time to establish them as people rather than the unwilling-thug and class-clown types they initially embody. That long opening, full of off-base assumptions and never-seen-again characters, sets up a grimy City Of God-like world where everyone, from the kids who clean the guns to the warlords who work in the jungles, is involved in the drug trade in some way, and everybody puts on a pretense of being tough enough to take guns and mortal threats for granted, and shrug them off. But on the boat, the brothers start to drop those pretenses and let their guards down, and as the situation keeps escalating, their personal strengths and weaknesses emerge.

Blanco has a strong eye for a memorable landscape: Manos Sucias gets deep into Colombia’s waterways and countryside, especially during a thrilling, vividly shot motorized-cart chase along railway lines deep in the jungle. The deep green of the jungle and the rivers, and the characters’ near-silent movement among them, sets up a Werner Herzogian sense of feral natural ferocity barely kept in check outside of the ragged Buenaventura slums and the makeshift stilt houses along the waterfront. But when the pace picks up, the film’s breathless soundtrack, full of funereal choral howls and minimal percussion, speaks to a different kind of emotional, human wildness. The film touches on racial conflict and the desperation that drives people to work in the drug trade, but more than anything, it deals with opportunism, and the way poverty and anger can inspire split-second, hazardous choices that seem right in the moment, and endlessly regrettable upon reflection. The beginning of the film is purposefully surprising in many little ways, but the rest of the film is a gorgeously shot, heart-in-throat wait to see whether the payoff can dodge expectations nearly as well. The journey is more important than the destination, but Wladyka makes enough daring choices to make both worthwhile.