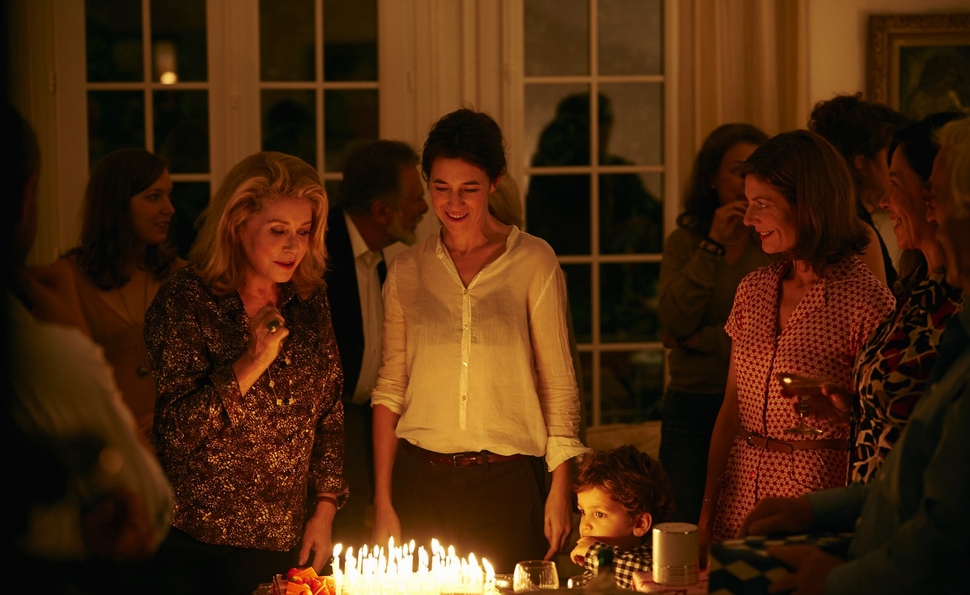 Alfred Hitchcock’s famous remarks to François Truffaut about the distinction between surprise and suspense have always seemed pretty ironclad. If the bomb under the table simply goes off without warning, it provides a brief moment of surprise; if the audience sees the bomb planted, and knows it will go off in 15 minutes, a gifted filmmaker can milk the scene for 15 minutes of suspense. But what if the bomb malfunctions? And then another bomb is planted in the next scene, and that one also malfunctions? After, say, six consecutive iterations of this scenario, viewers are likely to start getting restless, if not actively annoyed, no matter how deftly each near-miss is teased out. That’s more or less the experience of watching Benoît Jacquot’s maddening melodrama 3 Hearts, which beggars belief with the amount of combined coincidence, contrivance, and character idiocy required to keep the plot from collapsing.

First, the coincidence. Having narrowly missed a train back to Paris one night, tax auditor Marc Beaulieu (Benoît Poelvoorde, still best known as the serial killer in 1992’s Man Bites Dog) impulsively starts talking to a woman (Charlotte Gainsbourg) on the street. Her name is Sylvie, but Marc doesn’t know that, or anything else about her; though they share a lovely romantic night, walking and talking until dawn, they decide to pull a Before Sunrise and agree to meet later at a specified time and place, without exchanging any contact info, or even their names. Sure enough, although Sylvie shows up, Marc is delayed by a mild heart attack, and has no way of ever finding her again. Back for another job in the provincial town where Sylvie lives, however, Marc meets another woman, Sophie (Chiara Mastroianni), and falls in love with her, unaware that Sylvie is her sister.

That’s fairly ridiculous, but masterpieces have been fashioned around much less believable plots. Story, however, has never been Jacquot’s strong suit. His best film remains 1995’s A Single Girl, which simply follows a young chambermaid (Virginie Ledoyen) around on her first day at work, dispassionately observing her as she learns the routine and internalizes having just told her boyfriend that she’s pregnant. 3 Hearts gives Jacquot plenty of opportunities to pan sinuously from one face to another, but his visual dexterity—and Bruno Coulais’ foreboding Inception-style BRAAAAMs on the soundtrack—are squandered on some of the dopiest machinations ever written. Here are some of the things that have to happen so the film doesn’t just end:

• Sylvie moves to the United States with her boyfriend the second Marc fails to show up for their meeting.

• Sophie has no pictures of Marc she can show Sylvie via Skype—“It’s not his thing,” she says.

• When Sophie invites Marc to talk to Sylvie during one of their frequent Skype conversations, he’s too busy helping someone move furniture to step in front of the camera for even five seconds and say hi.

• Marc sees a picture of Sophie and Sylvie as small children, and remarks upon how much they look alike. “Not really,” reply Sophie and her mother (Catherine Deneuve, Mastrioianni’s actual mother), and they tell Marc to go look at pictures of the adult Sylvie on the wall. He wanders over, but decides: Nah.

And on and on like this, well beyond the realm of credibility. Eventually, Marc does figure it out, thanks to a cigarette lighter he loaned Sylvie that turns up in a drawer at her sister’s house. But rather than simply tell Sophie what happened, or contact Sylvie and suggest they keep it a secret (or finally consummate their passion, as they merely kissed during their one night together), he does… nothing. Just waits anxiously for the inevitable train-wreck when Sylvie arrives for their wedding, having no idea that her beloved sister is marrying the long-lost love of her life. And then Sylvie is late for the wedding, because her flight is delayed. And then by the time she shows up at the reception, Marc has gotten so drunk that he’s gone inside and passed out, so she still doesn’t know who he is. And then, and then, and then. By the time Marc and Sylvie finally start having a full-blown affair and jeopardizing everyone’s happiness—four or five freakin’ years later!—it’s impossible to care, especially since none of the actors succeeds in making these people psychologically complex characters rather than narrative bumper cars. Suspense can be riveting, but 3 Hearts really needed to deploy its bomb much earlier. When it does goes off, it’s a dud.