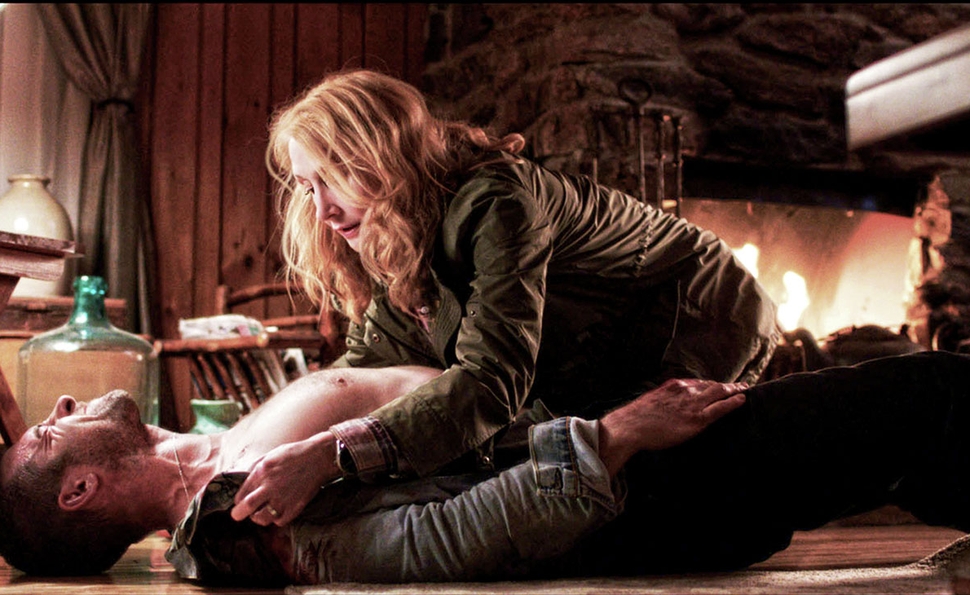 There are only three characters of any significance in the tepid thriller-cum-romance October Gale, and none of them is particularly interesting. A doctor named Helen Matthews (Patricia Clarkson) is heading out for a weekend at the house she owns on a small island in Northern Ontario. Stray lines of dialogue between Helen and her adult son, Henry (Eric Murdoch), make it fairly clear that Helen’s husband recently died, and she certainly appears to be grieving as she busies herself at their vacation home, boxing up the clothes he’ll never wear again. Nonetheless, writer-director Ruba Nadda (Cairo Time, also with Clarkson) keeps throwing in hazy-looking flashbacks to their life together—virtually every object Helen picks up, from a paperback to a deck of playing cards, triggers another memory. Nothing specific emerges about their relationship, however. It’s just a reminder that Helen is in mourning, provided again and again and again, for 20 minutes solid. Anyone else around?

Yes, finally. Late at night, Helen hears a noise outside; going to investigate, she finds a small boat at her dock, its interior smeared with blood. Returning to her house, she finds a man crawling feebly along the floor, bleeding profusely. William (Scott Speedman) has a gunshot wound in his shoulder, but fortunately, Helen is a doctor. Once he regains consciousness, the two gradually develop a remarkably bland rapport, as Helen relates her feelings of guilt about the boating accident that killed her husband, and William steadfastly refuses to explain who shot him and why. Helen seems bizarrely relaxed about the presence of this wounded, tight-lipped stranger, and Nadda evidently believes that her chatty script is laying the groundwork for passion to emerge. Talented though Clarkson is, though, she can’t do miracles with nothing. The long middle section of October Gale is little more than a study in strained politeness, made slightly less tedious by Clarkson’s no-nonsense charisma and Speedman’s unusually (for movies) believable simulation of how painful it is to get shot.

After a full hour of wheel-spinning, Nadda finally gets to the “thriller” part of the movie, as Helen’s island is invaded by Tom (Tim Roth), the third and final character of note. Tom means to kill William, for a reason that’s almost too banal to relate—given how little drama October Gale has to offer, saying more seems downright churlish. Unfortunately, Nadda has no flair for suspense, either. Most of the movie’s third act consists of Tom delivering a long Talking Killer monologue to Helen, though at one point he does stop to murder a minor character, for no apparent reason, lest this fourth individual mistakenly contribute something of real interest to the story. Even Tom’s monologue—which Roth struggles to inflect with some menacing mock cheeriness—isn’t so much overheated or risible as just kinda dull. October Gale plays like an adaptation of a quick outline for a romantic thriller, rushed into production before anyone got around to actually writing the screenplay and fleshing things out. The wind barely stirs.