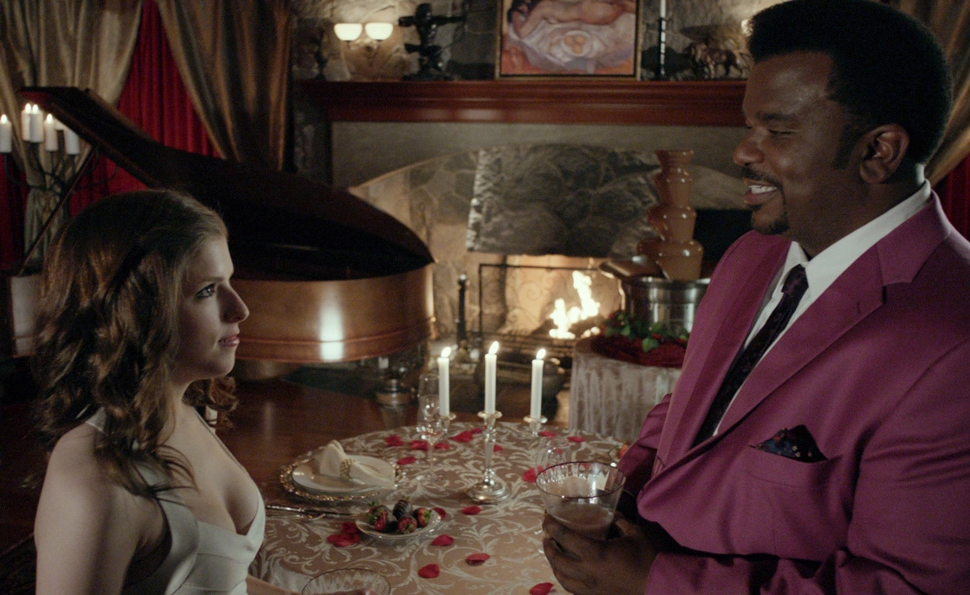 The fantasy-comedy Rapture-Palooza is borderline-heartbreaking in its wasted potential. The film overflows with inspired comic ideas that fizzle and die in execution like a marathon fireworks display of nothing but duds. The central comic conceit is to depict post-Rapture life under the rule of the Antichrist (Craig Robinson) as more a pain in the ass than a nightmarish ordeal. The survivors not called up to heaven carry on as before, but with additional aggravations like stoner wraiths, locusts and crows that scream obscenities, and a world leader who delights in blowing up Chicago just because he can.

Lindsey Lewis (Anna Kendrick), the film’s narrator and protagonist, responds to this cosmic upheaval with a shrug and a resigned sigh, and much of the film’s non-starting comedy relies upon its heroes acknowledging far-fetched supernatural hijinks with similarly deadpan under-reaction. Along with boyfriend Ben (John Francis Daley), Lindsey is determined to make the best of her circumstances, but when the Antichrist loudly announces his desire to make the beast with two backs with her, the directionless young couple is spurred into action.

Rapture-Palooza introduces a vast, sprawling post-apocalyptic world where the fantastic is commonplace, and the sight of blood raining from the sky registers as little more than an unusually humid summer. Then it ignores that world in order to devote much of its running time to heroes trying to drug the Antichrist and hold him captive in a kennel. Similarly, a promising notion that a long stint on Earth makes wraiths lose their ambition to spread evil winds up as a new frame for the same tired old stoner jokes, just as the foul-mouthed locusts and crows are essentially excuses to shoehorn in witless profanity. Their Tourette-like outbursts don’t even qualify as jokes, but they add to the overall feeling of smutty, gratuitous vulgarity.

Rapture-Palooza makes a number of crucial mistakes. It plays against the strengths of its talented, overqualified cast by having the whip-smart Kendrick play a bland, ditzy flake. Even more disastrously, it has Robinson play the Antichrist not as a great charmer or seducer, but as a rancid, charmless asshole luxuriating in his own lascivious awfulness. Robinson’s performance feels like a second-rate variation on Terry Crews’ hilarious turn as President Dwayne Elizondo Mountain Dew Herbert Camacho in Idiocracy. Each actor plays the most powerful man in a fantastic universe as an unabashed, potty-mouthed, unhinged vulgarian who follows every lurid impulse. But Crews makes the character funny and likeable in spite of his shamelessness, whereas Robinson comes off as grating. Like too many comedies these days, Rapture-Palooza has the wheezing, self-indulgent quality of gifted improvisers ad-libbing to bolster a weak script and an even weaker plot. It doesn’t benefit from comparisons to the similarly themed but far superior This Is The End, which also starred Robinson, and was also scatological and self-indulgent, but far more entertaining.

For years, rumors have circulated of a second Bill & Ted’s Excellent Adventure sequel. Rapture-Palooza, written by Bill & Ted screenwriter Chris Matheson (son of famed science-fiction writer Richard Matheson) and produced by his writing partner Ed Solomon, sometimes feels like a rejected screenplay for a Bill & Ted sequel crudely repurposed as an original (or at least semi-original) movie. Like the Bill & Ted movies, Rapture-Palooza puts the fate of the world in the hands of two clueless but well-meaning protagonists, and derives humor from the incongruous juxtaposition of goofy slacker comedy and fantasy/science-fiction spectacle. But the Bill & Ted movies, particularly the original, have a genial, good-natured affability that stands in stark contrast to the surprisingly mean-spirited Rapture-Palooza. It treats life after the apocalypse as a dumb joke that doesn’t even have the distinction of being funny.

For folks who inexplicably want to delve even deeper into this world, the Blu-ray has an audio commentary featuring Robinson, Rob Corddry, and Paul Scheer; a behind-the-scenes featurette; deleted scenes; and a gag reel.