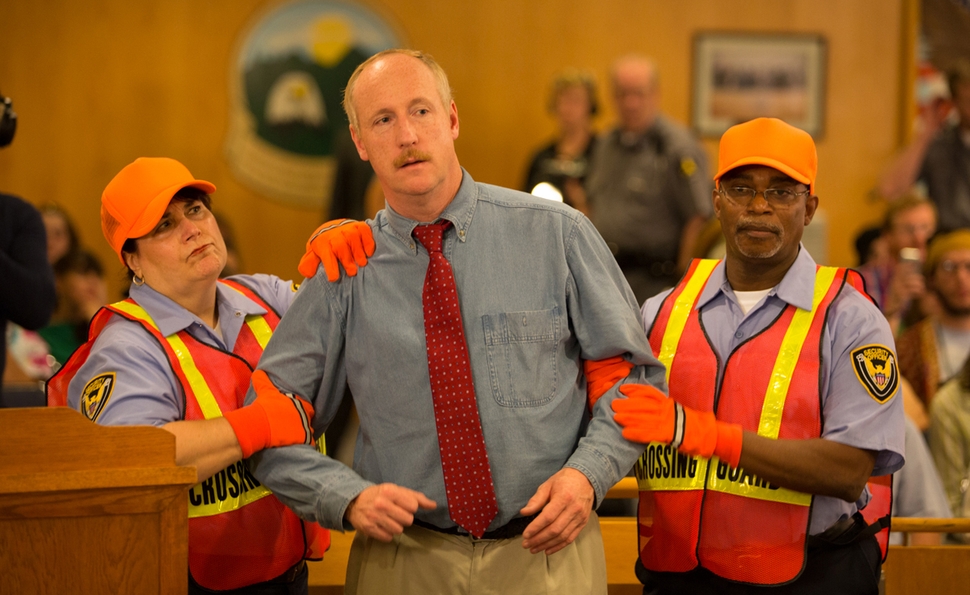 John Updike was quoted as saying of J.D. Salinger, “[He] seems to love his characters more than God loves them.” Cult comedian David Cross, best known as half of Mr. Show With Bob And David and as the cutoffs-clad analrapist Tobias Fünke in Arrested Development, has no such problem. Though he doesn’t appear onscreen in his noxious directorial debut Hits, Cross plays a malevolent, fickle God to the assortment of wretches who fall under his camera. His dramatis personae reads like a nasty cross-section of modern society’s least-loved stereotypes. In Men, Women & Children, Jason Reitman loosed the moral corrosion of the Internet on the fundamentally decent inhabitants of our nation’s suburbs. Hits shares that film’s fogeyish distrust of the World Wide Web, but swaps out the cast for a collection of the most pathetic, deluded, hateful, and dim scraps of human refuse upstate New York has to offer.

But first, credit where it’s due. Everything else notwithstanding, Cross has a real knack for pacing and plot structure; he traces smooth lines to introduce the disparate objects of his bitter mockery. Dave Stuben (Matt Walsh) spends his spare time writing angry letters petitioning his local Public Works department to fix the pothole outside his house—he’s a Parks And Recreation townsperson with a fuller backstory, treating the weekly town public forums as a soapbox for his furious ranting. Meredith Hagner plays his daughter Katelyn, who dreams of escaping the suburban enclave of Liberty, New York (why must all indie-film small towns have baldly ironic names?) for reality stardom on The Voice. Like so many divas angling for public attention on reality programs, she’s a bad person and a worse singer.

Her pal orders a onesie on Etsy, which carries the focus to insufferable Brooklynite Donovan (James Adomian) and his baby-crazy wife Maddy (Erinn Hayes). While on a drop-off, their friendly neighborhood weed guy (Michael Cera, one of the film’s several criminally underused comedic talents) shows them a video from an upstate town-hall meeting featuring his councilwoman mother (Amy Carlson). Dave’s mad ravings at that meeting inspire Donovan to upload the whole bit to YouTube and claim Dave as the cause célèbre for his painfully hip advocacy group Think Tank. Major news outlets get ahold of the burgeoning hubbub, and in the time it takes for a video to buffer, everyone’s planned to turn the circus into their big break.

Cross gathers a lot of narrative strands and elegantly knots them during a big, farcical climax. But that’s the one aspect of the film that truly works as it should. Just about every other element of Hits, from its eagerness to snigger at the expense of small-town yokels to its sneering disdain for the common-rabble forum YouTube, leaves a sour taste. Cross’ stand-up is characterized by his unflagging bitterness, but also his intelligence, righteousness, and humor. Hits has the first in spades, but skimps on those other three. (Outside of the cathartic climax, there are virtually zero laughs in the film.) In aiming all his critical weaponry on easy targets like artisan-cardboard fetishists and posturing white rappers, Cross just comes off as a bully.

Cross likes nudging his characters into awkward scenarios just to watch them squirm—and implicitly, to share in a mean-spirited laugh with the audience at the dummies on the screen. Cross concludes the film with Lily Allen’s “The Fear,” and its decidedly unsubtle opening lyrics: “I wanna be rich and I want lots of money / don’t care about clever, don’t care about funny.” In the comedian’s suburban sprawl, motivations don’t get much more complex than that. Whether from a place of self-importance, extreme narcissism, or blind rage, everybody just wants their 15 minutes. Rewards go to those willing to bloviate loudest and hardest. The most direct path to stardom is paved with assholes.

Cross has made a few headlines with his choice to release the film theatrically via BitTorrent, under a pay-what-you-like policy, à la Radiohead’s In Rainbows rollout. It’s only fair that audiences extend the same generosity toward Cross that he extends towards his own playthings. Tight-fisted viewers will find that they get what they pay for from Hits; everyone else has overspent.