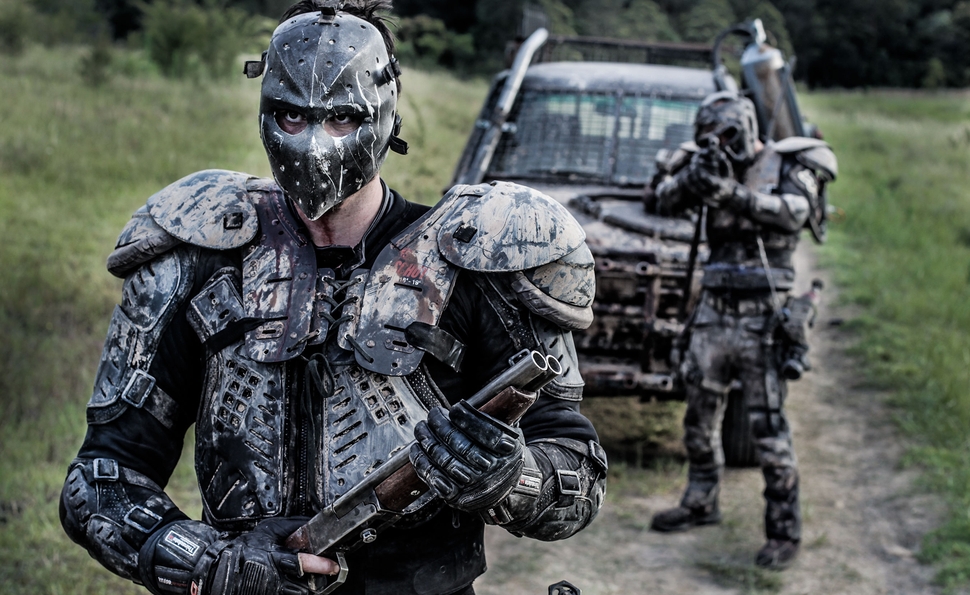 Wyrmwood: Road Of The Dead

Oh, hey, look, it’s another zombie movie. Everyone can stop clamoring now. First important question: Are these traditional Romero-style slow-shuffling zombies, or newfangled speed-demon “rage” zombies? Australian filmmaking brothers Kiah and Tristan Roache-Turner (Kiah directed, both wrote the script) clearly gave this a lot of thought, and they’ve settled on the same answer Barton Fink hesitantly gives when asked whether his wrestling picture should include an orphan or a dame: “Both, maybe?” For a while, this seems to make little sense, but eventually the human characters work out that these zombies, while sluggish and easily evaded during the day, become world-champion sprinters by night. Why? Just because. It’s somehow related to the use of fetid zombie breath as an alternative to gasoline, which also only works while the sun is up. The practical result of these arbitrary rules is that Wyrmwood’s zombies might as well be vampires or werewolves, since daylight renders them all but helpless. Well, it’s unique!

The other unique elements in this otherwise-rote horror flick are slightly more successful, though neither really amounts to much. After expending way too much time on the initial zombie outbreak—heavy on standard beats involving people forced to kill loved ones who’ve been bitten and are starting to turn—Wyrmwood splits into parallel tracks following two siblings. In one storyline, Barry (Jay Gallagher), having dispatched his zombie wife and daughter, joins forces with Benny (Leon Burchill) and some other survivors, and they collectively work out that they can power an armored vehicle using the exhalations of captured zombies for fuel. More intriguing is what becomes of Barry’s sister, Brooke (Bianca Bradey), who’s abducted by soldiers and handed over to a mad scientist (Berynn Schwerdt) for zombie-related experiments. It’s unclear whether her special abilities are innate or caused by an injection, but Brooke soon finds she can establish a telepathic link with any nearby zombie, controlling its actions.

When these two strands finally connect in a gory climax, Wyrmwood belatedly sparks to life, though the mind-control aspect proves less inventive than it initially appears. (One zombie slave at a time doing the hero’s bidding offers richer possibilities than an entire zombie army does; this movie opts for the latter.) Given that Brooke spends much of the film as a captive victim, Bradey makes her a compellingly fierce presence, to the point where a sequel with her as the sole focus seems potentially worthwhile. If the Roache-Turner boys do make another horror film, however, they’d be well advised to dial back their slavish duplication of signature camera moves by the likes of Sam Raimi and Peter Jackson. At one point, Kiah serves up an exact replica of Raimi’s “suiting up” montage sequences from the Evil Dead trilogy, booming into close-ups on various objects and garments as they’re picked up and donned; it doesn’t come across as homage so much as just an outright lift, born of having no original visual ideas. In the end, despite its quirky twists on the genre, Wyrmwood is just another zombie flick, riffing on its predecessors and hoping that’ll suffice. It needed more creativity. Or more passion. Both, maybe?