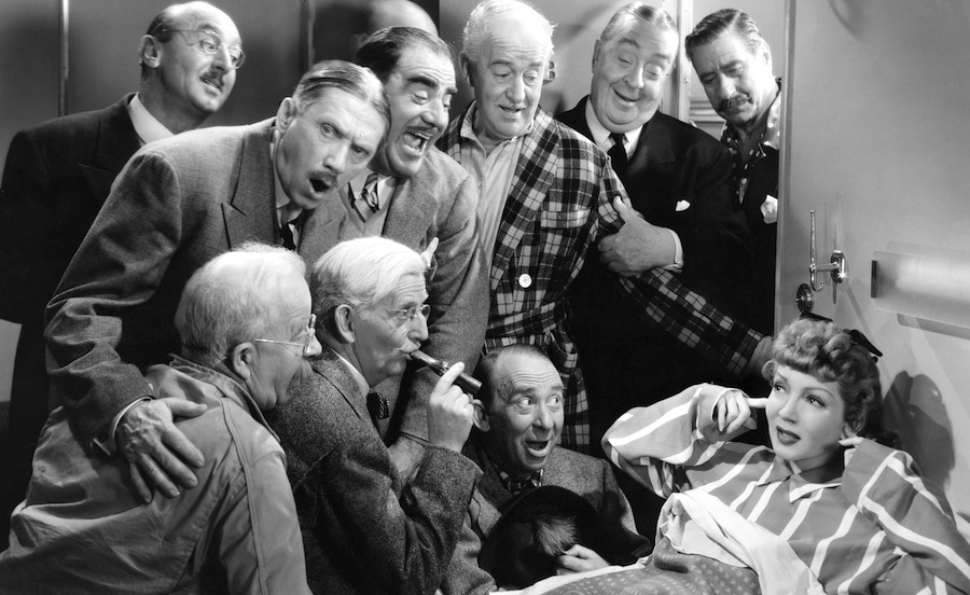 There’s little sense in The Palm Beach Story, but that doesn’t make it nonsense. Preston Sturges’ 1942 film begins in a whirl of confusion that never really lets up, and doesn’t get explained until the final scenes. (And even then, only sort of.) Before either of the leads gets a line, Sturges introduces one of his most memorable supporting characters in a filmography full of them: Robert Dudley’s diminutive, hard-of-hearing “Wienie King,” a benevolent millionaire who’s built his fortune on the backs of sausages (“Lay off ’em, you’ll live longer!”), and whose act of charity sets the plot in motion. At first interested in renting the Park Avenue apartment from which down-on-their-luck couple Tom (Joel McCrea) and Gerry (Claudette Colbert) are slated to be evicted, he instead gives Gerry money enough to pay the rent and buy herself something nice. But by eliminating one complication, the Wienie King introduces others. Gerry uses it as a chance to tell her husband it might be a good time to call it quits. After all, he could probably get more done without her, she can easily find a richer man, and they’ve started to take each other for granted anyway.

It’s a lie, mostly, but Sturges takes his time revealing that, and even as Colbert and McCrea trade fast-paced dialogue and fall into each others’ arms, they sell their characters’ marriage as one whose fire desperately needs tending. He can’t quite convince anyone to back his scheme of building a downtown airport by suspending mesh above skyscrapers, and one month’s rent isn’t going to fix that. Stanley Cavell famously laid out one subset of screwball comedy as the “comedy of remarriage,” and seldom has the category applied as well as it does here.

Yet even after Gerry presents her pragmatic argument for why she should hit the road, Tom can’t help pursuing her. Meanwhile, Gerry finds that even the most charming women have to struggle without money. She earns a train ticket by winning the hearts of the harmless but overly attentive Ale And Quail Club (filled out by Sturges regulars like William Demarest) before attracting the attention of kindly millionaire John D. Hackensacker III (Rudy Vallee), who drapes her in jewels and finery, and introduces her to his much-married sister The Princess Centimillia (Mary Astor) just as Tom catches up with them. Then the movie gets even more convoluted.

One of the great pleasures of The Palm Beach Story, not unusual for Sturges’ films, is that it takes place in a world without bad guys. The Ale And Quail Club drink too much and cause chaos wherever they go, but they’re sweet guys at heart, even if they need to lay off the booze. Hackensacker’s money and attention introduces an outside threat to Tom and Gerry’s already-troubled marriage, but he means well. As Stephanie Zacharek puts it in her excellent liner notes to this new Criterion edition, “he isn’t striving to possess her; he seems to want only to reflect back some of the joy she gives him.” And who wouldn’t? This is Colbert 10 years on from her It Happened One Night performance, bringing all the ebullience she used to animate that movie while drawing out the barbed undertones of Sturges’ script. Gerry hopes love is all you need, but she isn’t above hedging her bets if it isn’t.

That’s pretty much the film’s attitude, too. Colbert has a fine opposite in McCrea, who, as in Sturges’ Sullivan’s Travels, brings a solid, authoritative presence that almost hides the fact that he’s as cracked as everyone else in the movie. An airport in the air? Somebody has to be the realist in that relationship, even it means breaking it up for the good of all involved. There’s a movie’s worth of plot in the film’s giddy opening before Sturges reveals the title cards “And they lived happily ever after… or did they?” The Palm Beach Story leaves the answer hanging in the air, a touch as funny and true as any of Sturges’ jokes.

Special features: The meatiest special feature on this new edition has critic James Harvey giving a short but incisive account of Sturges’ career and where The Palm Beach Story falls within it. It wasn’t a huge hit—Harvey suggests it was “too strange” to find a big audience. It helped hasten Sturges’ departure from Paramount after a regime change less sympathetic to his movies. But quality has a way of surviving, as another feature makes clear: In a 10-minute appreciation, Bill Hader talks about why he loves Sturges, occasionally just reading Palm Beach dialogue and chuckling. Also included: A Screen Guild Theater radio adaptation starring Colbert, Vallee, and Randolph Scott, and “Safeguarding Military Infomation,” a Sturges-scripted military training film about the importance of guarding secrets against the Fifth Column. (The film saw general release after Pearl Harbor.) It’s an effective, occasionally chilling short that still features some of Sturges’ trademark wit and an appearance by Sturges favorite Eddie Bracken.