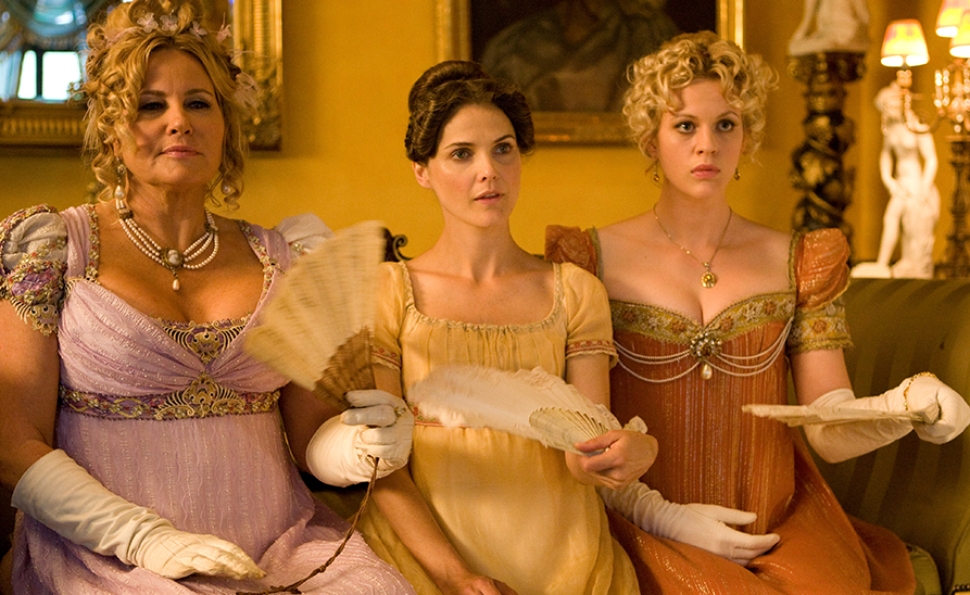 There’s a Miranda July level of preciousness at work in Austenland, an ever-so-slightly wry rom-com about a sheltered woman who tries to live out her Regency-era fantasies by blowing her meager life savings on a stay at a Jane Austen B&B theme park. Shannon Hale and first-time director Jerusha Hess (co-writer of Napoleon Dynamite and Gentlemen Broncos, alongside her husband, Jared Hess) adapted the screenplay from Hale’s novel, and the story has that tinge of loneliness and frustrated, easily crushed but pathetically preserved whimsy that makes July’s short stories and films so emotionally resonant, even at their most toxically quirky. But where July embraces the weird and awkward, and dodges predictable formatting, Austenland embraces convention, and the result is a romantic comedy in which the ending seems not just foreordained, but promised via contract from the first moment of the film.

Keri Russell stars as Jane Hayes, a character with an Austenian name and an Austenian outlook, to judge from her claustrophobic apartment full of flowery wallpaper, dainty teacups, and furbelowed china dolls. She’s an Austen super-fan: Also prominent in that apartment is a cardboard standee of Colin Firth as Mr. Darcy in the BBC Pride And Prejudice miniseries, and the words “Darcy Was Here” spelled out in wooden letters above her bed. But Jane can’t find the prim, disapproving, standoffish man of her dreams in modern-day America, so she flies to England, decked out in bonnet and gown, and signs on for a “guaranteed romance” experience run by fussy, disapproving Mrs. Wattlesbrook (Jane Seymour). Naturally, the experience goes wrong at every turn; Jane quickly finds out she’s bought the cheapest package, which literally entails being treated as a poor, unwanted relation throughout her stay. She’s forced to spend time with a guest who calls herself “Miss Elizabeth Charming” (Jennifer Coolidge), who is preposterously loud, crass, and foolish. And one of the handful of staffers playing the other bored aristocrats in Mrs. Wattlesbrook’s country house is, surprise, a prim, disapproving, standoffish man. On the other hand, Martin (Bret McKenzie), the house’s pretend-stablehand, is willing to step out of character and acknowledge the ridiculousness of their surroundings, and his self-effacing sympathies start giving Jane her first real feelings of intimacy.

One of Austenland’s primal problems is that it never establishes who Jane is before she runs off to play a fantasy character; apart from that glimpse at her embarrassing apartment, she doesn’t exhibit any characteristics except meek longing. That complicates the film’s cleverest aspect, the “what’s real and what isn’t” game that ensues as Jane swoons a little over Martin and as Mrs. Wattlesbrook treats her poorly—and like a real Austen character, albeit not the one Jane wants to play. The story operates fairly neatly on two levels; Jane no more wants to be patronized and looked down upon than Elizabeth Bennett or any other self-respecting Austen woman, but the way her poverty forces her into an unwanted role is fairly authentic. Then there’s the question of what anyone around her is actually feeling—a question answered, with some humor, by peeks behind the curtain at how the staffers act in their off-hours.

But the story constantly pushes too hard, in making “Elizabeth Charming” tremendously coarse and garish, in handling Jane’s love interests, in spelling out the themes, and particularly in the ending, in which those themes are re-explained in the most banal language possible. It’s crashing and clumsy where Austen was playfully satirical. And it’s tremendously bound to rom-com convention, in a way that could practically be plotted on a graph of expected story developments. Jane goes to Austenland hoping for a prepackaged romantic experience that will cater to her fantasies without challenging her. This film is exactly that.