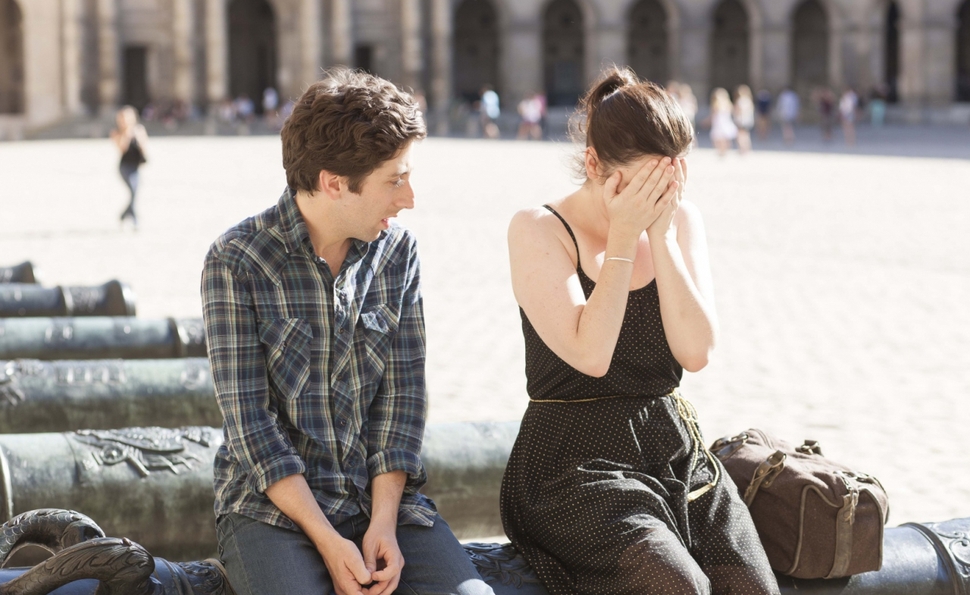 Beginnings are easy. Endings are hard.

What’s true of relationships is true of movies about them. We’ll Never Have Paris, a nimble and tangy comedy about the Problem of Fidelity from co-directors (and spouses) Simon Helberg and Jocelyn Towne, sails through most of its fleet runtime without a hitch, only to lose its nerve, slightly, in its final moments. C’est la vie. We’ll always have the first 90 percent of We’ll Never Have Paris.

Still, Helberg and Towne have delivered a 90-percenter that on paper looks like it should’ve been 100-percent insufferable. Helberg has never been more 1970s-model Woody Allen-like than he is here, playing the lead from his own script and supplying his hyper-articulate and well-read but largely helpless character, Quinn—a 28-year-old florist who aspires to be a jazz pianist, but is too anxious to perform in public—with a litany of ailments that apparently make him irresistible to women. The film opens with him waiting for an appointment with his optometrist father (Alfred Molina), who prescribes a pair of oversized old-man sunglasses and counsels Quinn to stop vacillating and propose to his girlfriend of 10 years. See, his problem is vision, get it?

And yet it works, mostly, thanks to Helberg’s committed, vanity-free performance, and to the bubbly chemistry between him and the luminous Melanie Lynskey as Devon, his first and only love. When Quinn tells his leggy, vapid coworker Kelsey (Maggie Grace) he plans to ask Devon to marry him, she confesses that she may be in love with him. That plants a seed of doubt in the fertile field of neurosis that is Quinn’s mind, and soon enough, Devon has fled to the City Of Lights. After a brief, ill-fated oat-sowing campaign, Quinn crosses the Atlantic to win her back, bringing with him a Liam Neeson level of determination, as well as a very particular set of skills: flower-arranging? Check. Piano-playing? Aye. Picking up on social cues? Recognizing when his damsel neither needs nor wants to be rescued?

Hey, no one can good at everything.

Helberg’s script gets points for recognizing that Quinn’s quest is at least as selfish as it is romantic, and Lynskey masterfully conveys the emotional payload Quinn’s arrival engenders. She’s moved by the sweeping gesture and appalled by his arrogance, often within the same glance. Helberg’s script is, according to a “Director’s Statement” released by him and Towne, based on an episode from their own courtship. (A title card reads, “Based on a true story—unfortunately.”) Even so, it’s fair to wish that Towne’s movie surrogate, Devon, wasn’t in such a hurry to forgive him. She looks more statuesque and radiant in each scene, while Helberg grows more hunched and emaciated, which seems fully intentional.

Let’s talk objectification. Helberg spends more time with his shirt off in this 92-minute picture than Chris Hemsworth has racked up in three films as the Mighty Thor, and it’s no wonder why: His untouched-by-puberty body is a priceless comic asset. All three of the women he sleeps with in this movie, including Lynskey, look like they would cause him unintentional yet grievous bodily harm in the bedroom. “You’re a pint-sized narcissist, and I could barely feel you inside me!” a rebound hookup tells him after he says a particularly selfish thing at a particularly inopportune moment.

The stuff in the margins is all good: Alexis & Sam’s Francophone score keeps the pace jaunty and light, and Zachary Quinto is a riot in a handful of scenes as Quinn’s metrosexual pal Jameson, who’s forever corning his own beef or inventing cocktails to feature his homegrown peppers or indulging in bold sartorial experimentation. He’s as good at being alone as Quinn is hopeless at it. Molina radiates his characteristic warmth, and Judith Light is just as good in a single scene as Devon’s exasperated mom. If only the movie had the courage to resolve in a way that’s a little less unambiguously cheerful than the episode that inspired it. Just because a story is true doesn’t necessarily make it believable.