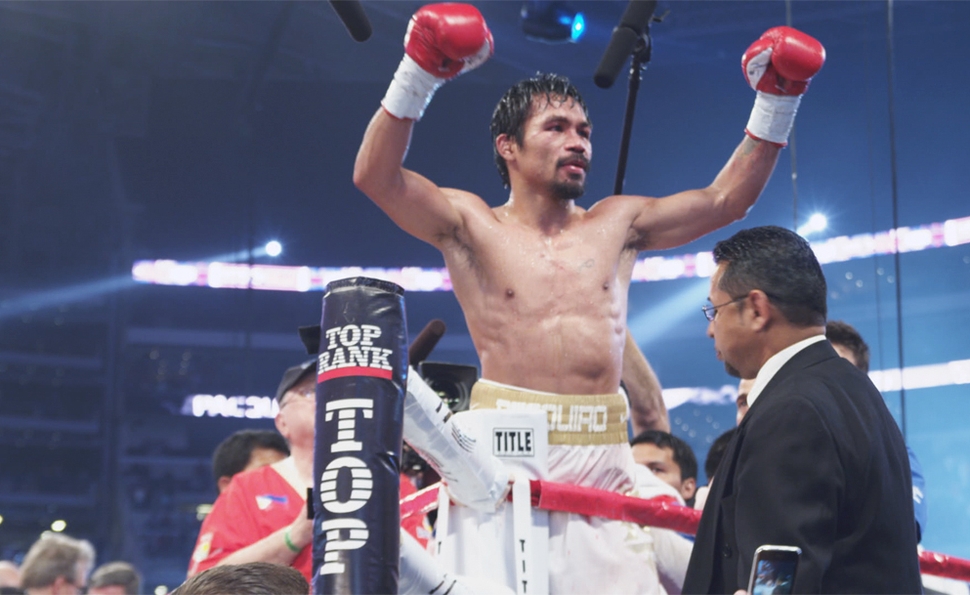 Manny Pacquiao is a busy man. By the time the hagiographic documentary Manny wraps up, with the boxer’s fourth fight against Juan Manuel Marquez in 2012, Pacquiao’s activities include his training and conditioning regimen, meeting the demands of being a husband and father of many, meeting the demands of being a lover to many women whom he hasn’t married (though that purportedly changed), making promotional appearances and working with his business managers and promotor, gambling heavily (though that purportedly changed), and serving as an elected official in the House Of Representatives in his native Philippines. That’s a very busy schedule. And within it, the time allotted to the makers of a documentary profile is but a tiny flicker in a galaxy of stars—one image-burnishing initiative among countless others, and as carefully packaged by his team as the rest of them. Scaling that PR wall to catch a glimpse of the real Pacquiao would be tough for any filmmaker. But Manny doesn’t even bother.

Narrated by Liam Neeson, who gives boxing clichés (“a fighter brings his whole life into the ring”) the proper gravitas, Manny coughs up a lot of sports narratives, but focuses mostly on Pacquiao’s rags-to-riches ascendance. “Born in the shadow of war,” to quote Neeson, Pacquiao grew up poor during a time of civil war in the Philippines, living with his family in a house constructed from the leaves of a coconut tree. As he approached adolescence, he bussed to Manila with no money and no prospects, but found his passion (and a home) in a boxing gym and proved to be a prodigious talent—small in stature, but devastatingly quick and powerful. When his skills finally brought him to America, Pacquiao caught the attention of Freddie Roach, a highly respected trainer, and eventually got a support team that included promoter Bob Arum, who once had Muhammad Ali as a client, and mirthless adviser Michael Koncz. (All three men continue to train and advise Pacquiao to this day.) As he worked his way up the ranks, Pacquiao did something unprecedented: He won titles in eight different classes, which involved beating men who were much taller and heavier than he was.

The best scenes in Manny are the highlight reels, offering ringside seats to Pacquiao’s triumphs as both a teenager with raw skills and as a polished and devastating fighter who could knock out opponents in hummingbird flurries. His highly touted fight against Oscar De La Hoya—deemed so dangerous to Pacquiao that Filipino lawmakers tried to pass legislation to stop it—made the former boxing superstar look as if he had arms of soft clay and legs of concrete. And through it all, Pacquiao’s demeanor in the ring is remarkably beatific, with none of the glowering and chest-thumping normally associated with this ritual of exalted masculinity. He attributes that to his relationship with God and God’s plan—a plan which, on balance, has worked to Manny Pacquiao’s favor.

Though co-directed by Leon Gast, who made the exceptional “Rumble In The Jungle” documentary When We Were Kings, Manny stays entirely on the surface of Pacquiao’s life and of a sport that’s rife with dirty dealing and chicanery. The film highlights Pacquiao’s interest in politics and public service by touting his sponsorship of a new hospital in his home province, but remains mute about his controversial stances on gay rights and abortion. His notorious appetite for women and gambling is raised—though his cockfighting operation is not—but brushed under the rug of his newfound faith. And the filmmakers are equally reluctant to step into the awful snake-pit of the sport’s managing class, which controls and exploits not only Pacquiao, but talented boxers who don’t get their shot at glory. They do, however, carve out some time to get Jeremy Piven’s expert commentary on how awesome Pacquiao is. So there’s that.