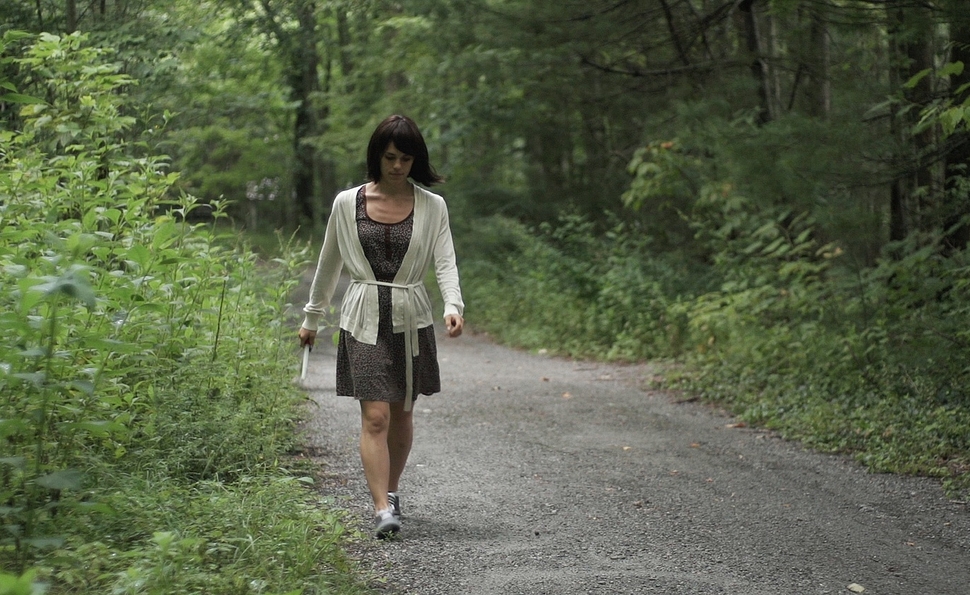 There are basically two kinds of mainstream movies where people check out of the life that’s been laid out for them, and they each tell their own type of lie. The first are movies like Eat, Pray, Love, which externalize the internal and treat happiness as something that can be achieved by checklist—sometimes literally. The second kind—American Beauty, Fight Club, and the like—are even more divorced from reality. Those movies all have an obligatory scene where the protagonist quits a job in spectacular fashion, in a moment of angry wish-fulfillment desire to have boss-like power. In other words, a moment of fighting on the wrong battlefield entirely—there’s a reason so many of those protagonists blackmail their way into staying on the payroll. One way to recognize that Paul Harrill’s Something, Anything is a remarkable film is to notice how gracefully it navigates its way around both these well-worn cinematic ruts.

Like other films that use the trope, Something, Anything features a protagonist on a spiritual journey. Margaret, played with intelligence and grace by Ashley Shelton, is reevaluating her life and marriage after losing a pregnancy. She’s left her husband (Bryce Johnson), whom she blames; she’s gone off the rails and isn’t sure she wants to get back on. Harrill stages a tiny scene in which Margaret’s parents, helping her move into her new apartment, offer to pay for her to travel to Europe. The deck isn’t stacked against her doing this—her father is genuinely worried, and casting about to make things right for his daughter. Harrill doesn’t give Margaret a grandiloquent speech about how little her external surroundings matter at that moment, but simply keeps the camera on her sitting on her bed, silent, framed by the door to her new bedroom as her father tells her to think about it, then shuffles off and turns on the football game. The Eat, Pray, Love approach isn’t mentioned again.

The scene where Margaret quits her realtor job is better still. Her boss (a quietly terrifying Susanna Rinehart) makes Margaret trade chairs and role-play. Pretending to be her—literally speaking for her—in the slow, measured tones of someone explaining something to a dim child, her boss tells Margaret why she became a realtor: “I went into this line of work because it affords me a lot of freedom… And there’s the money. The money affords me a lot of freedom.” Rinehart leans forward into a carefully placed beam of sunlight for the hard sell, and plays what she imagines is her best card: “This is the best job I have ever had. This is the only real job I’ve ever had.”

Recognizing when people conflate money and freedom, or try to tie self-esteem to the idea of real jobs: That’s where that particular battle happens. But although money is a distinct concern in the film, it would be hugely reductive to call it a “quit your job” movie. Instead of hanging everything on one or two blowout scenes where everything changes, Harrill lets Margaret find her way slowly, over the course of a year.

It happens in fits and starts, small realizations and big ones, as Margaret begins to discover what she wants from life—a question she has barely allowed herself time to ask. The film reaches for universality in the best way, by being very specific. It’s set in Knoxville, Tennessee, and it doesn’t idealize, mythologize, or condescend to the city or its culture. But although Something, Anything precisely captures a particular place, it isn’t about its setting. Knoxville isn’t a character in this movie.

But Margaret is, and Shelton’s performance is luminous. Especially in the film’s early scenes, she rarely speaks—it’s all eye movement, expressions she tries to hide, small gestures. Harrill’s direction and Jennifer Lilly’s editing fit the structure: The early scenes are heavy with insert shots and close-ups, but as Margaret slowly takes control of her life, the film opens up and moves back. The centerpiece is a section at a monastery in Kentucky—a real place—where Margaret goes to find a high-school friend (Linds Edwards). Harrill and cinematographer Kunitaro Ohi finally use long shots, letting Margaret be almost swallowed by her surroundings. Just as Harrill handles his setting with nuance, he treats religion with respect, but not as a panacea. “Every day’s a choice,” one of the monks tells Margaret.

Above all, Something, Anything is concerned with mystery: the ways Margaret is a stranger even to herself, the ways we all are. The world is full of people—and films—eagerly offering glib solutions about who we are, who we should be, and what five steps, seven habits, or three-part trips will get us there. But the real journey is internal and always has been: The only requirement is space and room. Something, Anything is the rare film that gently asks the big questions, then gives us space, and room.