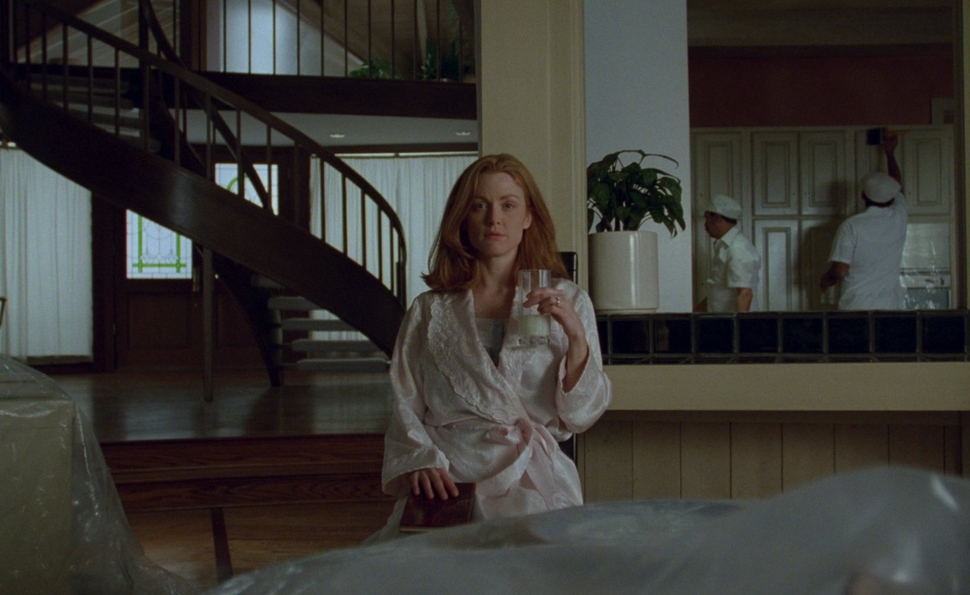 “Are you allergic to the 20th century?” So says a flyer that beckons Carol White, a wealthy Los Angeles housewife, at just the right moment in Todd Haynes’ Safe, one of the best and most defining American films produced as the century turned. Carol has just limped out of her aerobics class, unable to finish due to shortness of breath. It’s the latest in a series of incidents that have left her feeling increasingly debilitated, including a traffic jam that had her wheezing on great plumes of exhaust and a perm that bloodied her nose, perhaps from the chemicals squeezed onto her hair. Her doctor sees nothing wrong with her, beyond a lack of protein in her diet. Her new psychologist seems mystified that a woman with so few stresses in her life—the latest crisis is the delivery of a black couch that should have been teal—could find them so overwhelming. Her husband Greg (Xander Berkeley) just wants his Stepford Wife back, and can barely mask his irritation at her persistent ailments. And yet the flyer speaks to Carol, because this hermetic world of privilege had suddenly turned hostile and isolating, and nobody has any answers.

As a piece of filmmaking, Safe is brilliant for the way Haynes, in concert with cinematographer Alex Nepomniaschy and composer Ed Tomney, blankets the mundane in the eerie tone of science fiction and horror, especially in the first half. The interiors of Carol’s house are transformed from impeccable to antiseptic, with Nepomniaschy’s Kubrickian compositions framing the space as a kind of alien prison. Though Carol’s physical response to her environment is extreme, Haynes’ script renders her day-to-day duties as crushingly banal: Marshaling the maid and workmen to take care of the house, picking up the dry cleaning, keeping fit to vacant 1980s pop music, and entertaining guests with an accommodating tone and a thin smile. But the texture of those scenes is anything but banal—much like Carol, the exteriors are refined and put-together, but behind the surface, there’s something terribly, terribly wrong. And the fact that nobody can point to precisely what’s wrong with Carol makes it more terrifying still: She’s under attack from outside forces, and lacks the capacity to fight it. She’s empty inside, the perfect vessel for the self-help charlatans who claim they have the cure.

Safe divides pretty cleanly between its first half, when Carol is seized by an increasingly debilitating “environmental illness,” and the second, when she retreats to Wrenwood Center, an isolated desert haven that claims to treat people with vague symptoms just like hers. The gearshift between Los Angeles and Wrenwood is dramatic—one world brittle and antiseptic, the other “natural” (scare quotes intended) and touchy-feely—but Wrenwood is less the opposite than the flip side of the same coin. (A debate over which half of the film is “better” raged among critics in 1995, but it was always absurd to think of one as removed from the other.) In each milieu, Carol’s vulnerability is exploited in different ways: In L.A., men treat her condition with condescension and annoyance, either denying her suffering or waiting impatiently for it to go away. At Wrenwood, there’s no shortage of vague, hippified solutions on offer—courtesy of a self-help guru (Peter Friedman) who resides in a palace overlooking the compound—but the cures are worse than the disease.

At Safe’s center is Moore, whose extraordinary performance evokes sympathy while suggesting vacancy. As Carol, she’s blank, an intellectual and spiritual void, and  Carol’s journey isn’t about making her a more complete, substantive person. When called on to give a birthday speech toward the end, she strings together Wrenwood’s therapeutic buzzwords with all the articulateness of Miss Teen South Carolina. But Moore makes the audience connect to her vulnerability—and what’s more, she and Haynes bring across a feeling of late-20th-century loneliness and suffocation that isn’t limited to Carol. She happens to obsess over the toxicity of fumes spewing from aerosol cans and exhaust pipes, but she isn’t alone in focusing her anxiety on one modern threat or another. And she also isn’t alone in seeking solutions outside the mainstream, or taking extreme measures to heal or love herself. Haynes turns her into an avatar for modern ills, and turns her mundane world—and ours—into an eerie horror show.

It should be said upfront: Safe looks much better in the new Blu-ray version than it has since its theatrical release. For a film that won such acclaim—it was #1 on Village Voice’s Best Of The ’90s poll—it hasn’t been treated well on home video. Still, the Criterion edition preserves one great thing from the old DVD: A commentary track with Haynes, Moore, and Haynes’ longtime producer, Christine Vachon. Though their conversation is looser and more casual than Criterion productions generally allow, it’s full of insight, laughter, and warm recollections of making the film on a shoestring. The best new feature on the Blu-ray is the 2014 discussion between Haynes and Moore, who look back fondly on a film that started their own collaboration. Moore was a relative unknown when Haynes auditioned her, but she took some big chances in asserting her vision for the character in the first read-through, and left no doubt the role was hers. Also included is a separate interview with Vachon, whose Killer Films label added this to the many feathers in its cap, and “The Suicide,” a 1978 short co-directed by Haynes.