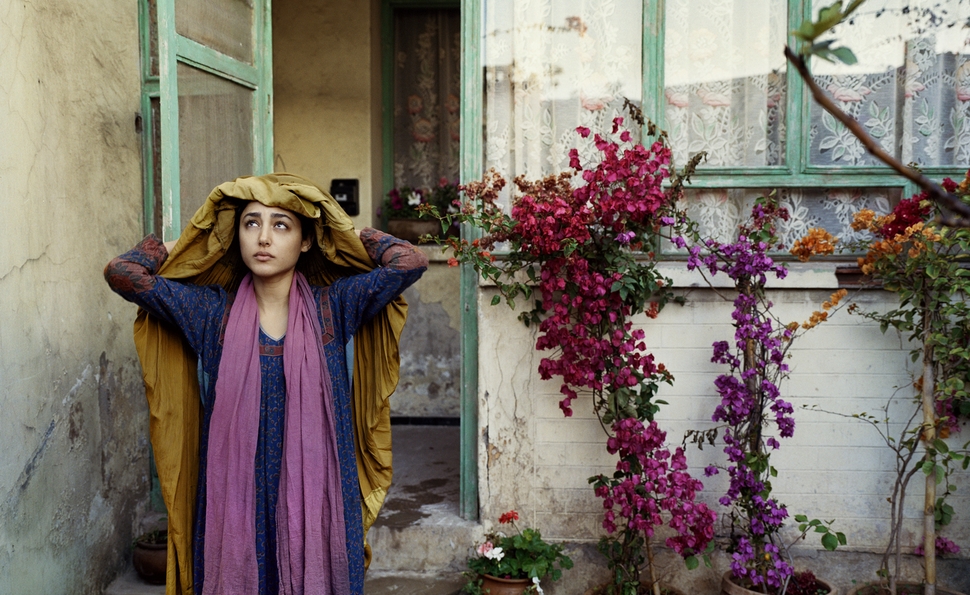 As The Patience Stone opens, its protagonist (played by Golshifteh Farahani, and referred to in the credits only as “The Woman”) has seemingly reached a dead end. She lives in an urban neighborhood that’s become the frontline of a conflict between government forces and religious fundamentalists. The neighborhood is in an unnamed country that resembles Afghanistan, the homeland of director Atiq Rahimi. The woman’s older husband (Hamid Djavadan, as “The Man”), a former soldier for the fundamentalists, lies in a coma in their living room, the victim of a gunshot wound to the neck incurred in the course of fighting with a man on his own side. Unable to afford the serum prescribed by doctors, the woman keeps him on a sugar-water drip and waits for him to revive. Having inched past the two-week mark, the time the local mullah said it would take, with prayer, for her husband to recover, she has little to do but sit and wait. And apart from taking her daughters to shelter when the fighting gets bad, that’s exactly what she does. That, and talk.

She addresses her unconscious husband as she never could when she was alive. She tells him about her childhood, particularly the abusive father who once staked her sister in a quail fight. And she talks about their marriage, which she entered reluctantly as a young woman, and a decade later, has enjoyed little. She talks about how she struggled in his absence and suffered in his presence. And in time, inspired by her prostitute aunt (Hassina Burgan) and her story of a stone that absorbs its teller’s secrets until it shatters, she starts confessing even more dangerous truths.

With a script co-written by veteran French screenwriter and former Luis Buñuel collaborator Jean-Claude Carrière, The Patience Stone adopts Rahimi’s bestselling novel. And though it’s sometimes strikingly shot, particularly a few scenes filmed on the streets of Kabul, the film struggles to shake off its origins as a largely interior narrative and to crawl out from the weight of its own central metaphor, in which the woman doubles as a stand-in for all women who endured life under the Taliban, and for Afghanistan itself, a country in which the past refuses to pass. In service of the first function, it feels obligated to have the woman’s life double as a list of indignities. In service of the second function, its point-for-point correlation makes it feel less like a human drama than an allegorical exercise, a tendency that only becomes more pronounced when a young soldier who might as well be named “The Future” enters the picture.

A number of elements keep the film compelling anyway. Rahimi spent years living in exile from Afghanistan, and there’s real anger beneath the details he chooses to share, details the woman and those around her have absorbed as part of everyday life. As a work of protest, it burns with the intensity of personal disappointment. But above all, it’s Farahani’s performance that keeps The Patience Stone grounded in the world of flesh and blood. An Iranian actor whose rebellious life has made her an exile from her country, Farahani makes “The Woman” seem like a particular woman rather than a symbol, and her drama of awakening—personally, politically, spiritually, and sexually—plays like the inevitable result of a frustrated lifetime spent in a country where the received wisdom suddenly looks anything but wise. For much of The Patience Stone, Farahani is the movie, and as she shifts from fear to despair to anger to emotions she’d never previously considered, her magnetic presence goes a long way toward putting a human face on the film, more successfully than the material around her.