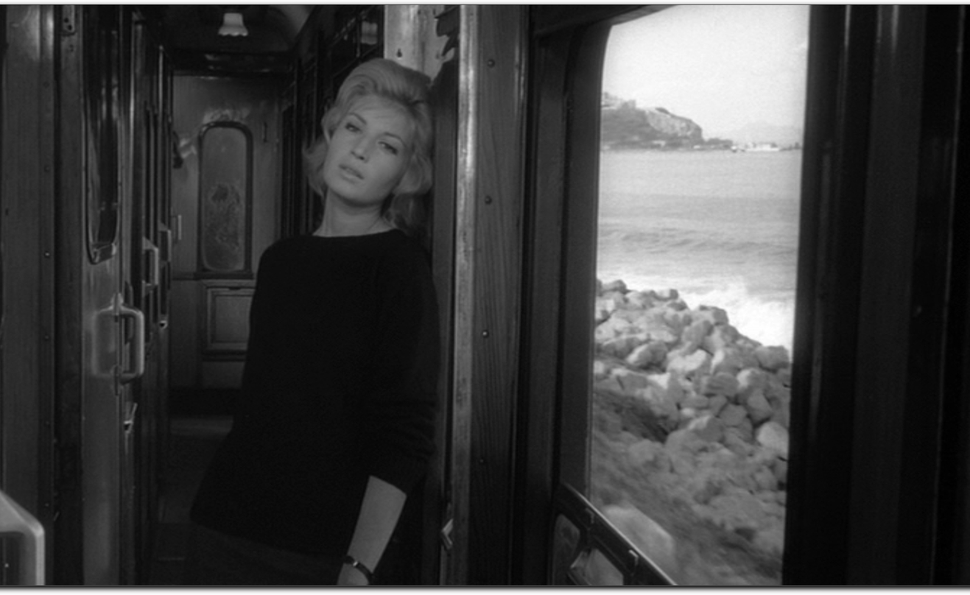 When Michelangelo Antonioni’s L’Avventura premièred at the Cannes Film Festival in 1960, it was greeted first with boos and later a Jury Prize. The polarization was so extreme, in fact, that members of the jury, along with filmmakers and critics, felt compelled to issue a declaration in support of its “exceptional importance” and in opposition to the “displays of hostility it has aroused.” It can be easy to forget, more than 50 years later, the degree to which Antonioni’s film rewrote the language of cinema, questioning its addiction to storytelling and opening up the possibility for other, more enigmatic and poetic forms of expression. Witness New York Times critic Bosley Crowther, who spent his tenure denying or resisting every advance the medium made during the period. He likens L’Avventura to “trying to follow a showing of a picture at which several reels have got lost,” and complains throughout the review of its “big pot-holes” and omitted details. He seems to know these elisions are deliberate (“Antonioni deals only with what seems to interest him”) and recognizes that “there is a great deal of beauty and excitement in the pure composition of movement against architectural forms.” But he can’t bring himself to assign great value to it, shrugging it off as a “weird adventure.”

Crowther wasn’t alone then—or even now—but it’s worth remembering how radical Antonioni’s film was, in part because his filmmaking values have been so widely adopted in the decades since. The Cannes that booed L’Avventura in 1960 now has a competition slate where a solid majority of films share its DNA—including this year’s winner, Nuri Bilge Ceylan’s Winter Sleep—and his influence is so invisibly pervasive that critics can claim he’s “out of fashion” without recognizing that his style is draped over every mannequin in the store. In truth, the subsequent entries in Antonioni’s trilogy of alienation, 1961’s La Notte and 1962’s L’Ecclise, refined and deepened L’Avventura’s modernist gestures. But that first shot across the bow remains a wonder, in part for its surpassing beauty, and in part for its almost perverse refusal to play by the rules.

Some of its enduring majesty is owed to the otherworldly presence of Monica Vitti, who is simultaneously bewitching and obscure as her character processes a series of conflicting emotions that not even she can easily identify or control. In the opening, Claudia (Vitti) and her best friend Anna (Lea Massari) are summoned by Anna’s long-distance lover Sandro (Gabriele Ferzetti) for a boating trip off the coast of Sicily. Along the way, Anna expresses some frustration about her relationship with Sandro, which isn’t entirely abated by a spontaneous lovemaking session before the trip. Once at sea, the three join two other wealthy couples for a jaunt around the  Aeolian Islands, noting their barren climes of volcanic rock. Anna and Sandro go off on their own. They fight. And then Anna simply disappears.

What happened to Anna? The authorities are called in to investigate, along with her father (Renzo Ricci), and L’Avventura has the makings of a classic procedural, with Sandro as a possible suspect. Fully aware of what’s expected of this narrative, Antonioni takes it from foreground to background, replacing it with Claudia’s private existential crisis and her tenuous romantic relationship with Sandro, tangled in guilt and desire. (Ferzetti’s failure to live up to Vitti’s magnetism is the film’s one persistent flaw. He gets top billing, but she resolutely dominates.) It isn’t like Anna’s disappearance is irrelevant to the narrative—to the contrary, it lingers like a fog over every scene—but Antonioni’s interest in following through on the investigation and answering the question of what happened to her is virtually nonexistent.

Of greater interest to Antonioni and L’Avventura is finding other ways to express these characters’ psychological states, from landscapes and architecture to contemplative silences and the contours of Vitti’s face. And though it keeps a cool emotional register, the film is nonetheless revolutionary for its refusal to engage in the conventions expected of it. Crowther had it right that Antonioni was dealing only with what interested him, but he couldn’t quite come around to the thought that that’s what a great artist does, however much it cuts against the grain. World cinema eventually caught up to L’Avventura, but for a time, it had the rest of cinema choking on its dust.

While the 4K digital restoration is new, the extras on the L’Avventura disc largely aren’t. Still, it remains a formidable collection. On a 1989 commentary track, film and video historian Gene Youngblood gets into the film’s genesis and sometimes-tortured production history, while focusing heavily on Antonioni’s emphasis on architecture and framing to tell a story. “Antonioni: Documents And Testimonials,” an hourlong black-and-white Film Board Of Canada documentary from 1966, relies to an unusual degree on raw footage of the director at work, supplemented by archival interviews. Jack Nicholson, who worked with Antonioni on 1975’s The Passenger, reads two of his essays in his inimitable voice, and spends a third track talking about working with the man. (“If you think you can work with this old Italian bird without thinking…”) Last but not least is a three-part visual essay by Olivier Assayas, who calls L’Avventura “a turning point in the evolution of film.”