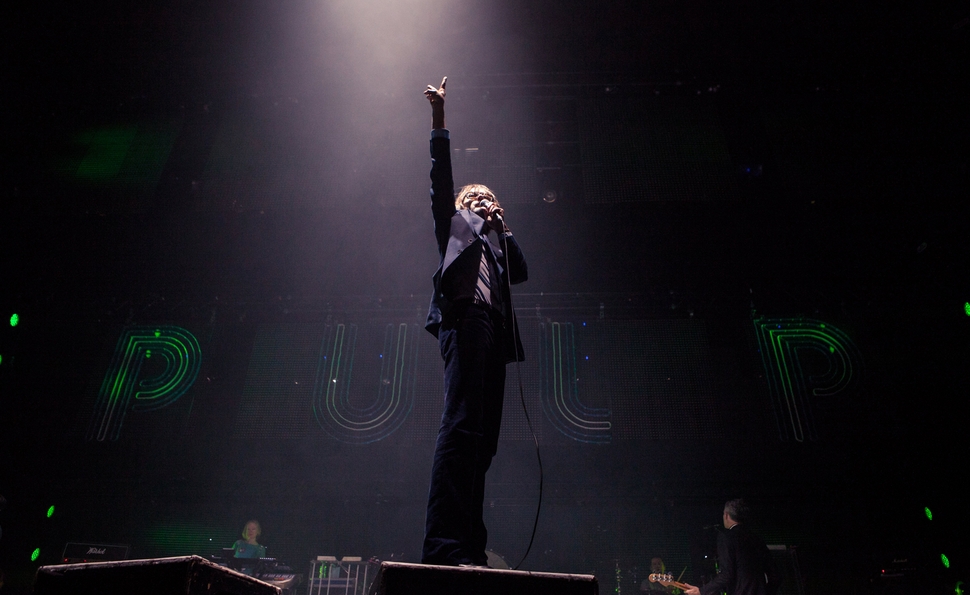 When success found Pulp in the early 1990s, it probably surprised the band as much as anyone. One version of Pulp or another had been around since 1978, when lead singer Jarvis Cocker was 15. The group earned some acclaim but little success. Then the Britpop wave crested, and the times seemed to catch up with Pulp. By then, the band had honed its craft, spinning propulsive, barbed, often wickedly funny songs out of the stuff of everyday life in the band’s native Sheffield, a working-class city in northern England. When Pulp channeled its energies to the subject of class divisions with 1995’s Different Class, which yielded hits like “Common People,” it got more popular still, briefly making Cocker one of the most famous men in England. It didn’t suit him. Or, as Cocker tells the camera in Pulp: A Film About Life, Death & Supermarkets, “It just didn’t agree with me. It was like a nut allergy.”

Directed by Florian Habicht, Pulp is set around a December 2012 Pulp performance in its hometown, which the film bills as “The day of Pulp’s last U.K. concert.” The film captures a band some distance away from the mania that surrounded it in its heyday. Since disbanding in the early 2000s, Pulp has had occasional reunions, which have been more about nostalgia and pleasing old fans than pressing the story forward. Cocker even likens this concert to an attempt at creating a “happy ending.” (“I know that tidying up isn’t the greatest rock and roll motivation,” he says.) But that reflectiveness works for a film that’s less about thrilling live performances—though it includes some of those—than putting the band’s history in context.

Habicht used Pulp And Sheffield as the film’s working title—the credits list “The People Of Sheffield” in the cast—and the film attempts to capture the flavor of the place through interviews with the band; people who knew Pulp before it became famous, back when Cocker worked as a part-time fishmonger; and ordinary fans. One of the latter explains one reason he prefers Sheffield to London, where he lived unhappily for a bit: In London, he got mugged. It happens in Sheffield, too, but at least there, “It’s usually funny. You usually know the person that’s mugging you.”

Like other recent music movies, such as the Nick Cave doc 20,000 Days On Earth, and the National-focused Mistaken For Strangers, Pulp attempts to find the bigger story around its central subject. Habicht alternates concert footage with bits of the band’s history, an academic lecture on Different Class, and oddly affecting moments, like a group of senior citizens singing “Help The Aged.” There’s a sense that the band has left its mark on Sheffield as surely as the city left its mark on the band. This concert might be Pulp’s last hometown appearance, but it hardly seems like goodbye.