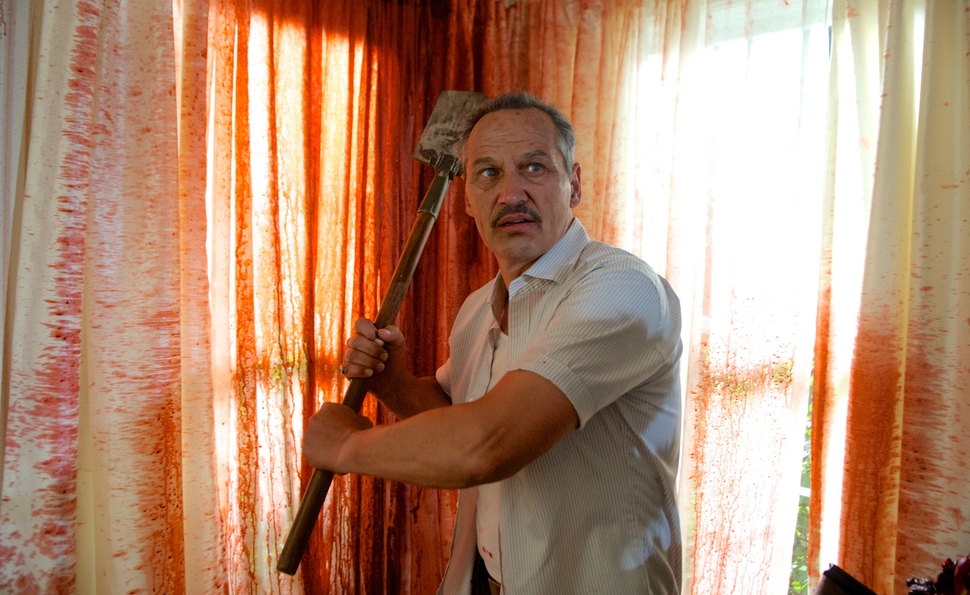 “I should have taken her out of here the moment I heard the stories,” says a woman grieving for her recently deceased mother in Late Phases, the new film from director Adrián García Bogliano. “But there were so few options, and I swear, I never thought she’d…” Managing care for an aging parent is a complicated, fraught proposition, and the terrifying thing about elder abuse is that it’s nearly impossible to anticipate or detect. So it’s cruel to second-guess these kinds of decisions, especially when someone has just suffered the loss of a parent. Still, it’s hard to feel too much sympathy for someone who checks her mother into a retirement community where the residents are obviously being eaten by werewolves.

That’s the problem with Crescent Bay, which doesn’t seem like a particularly great place to live even without corpses piling up every full moon. The front-gate guard is rude, the houses are bland and impersonal, and even the moving trucks are late. The newest resident is Ambrose McKinley (Nick Damici), a cheerful fellow who opens the film by dragging his son (Ethan Embry) along on an impromptu headstone-shopping expedition. McKinley is a veteran and a weapons expert, and would be well-suited to mount a werewolf defense, except that he’s also blind. After his first night in his new home, he doesn’t even have a seeing-eye dog. (Werewolf attack.) On the plus side, his disability means he has more than the usual amount of leeway for staring off into the distance while growling lines like, “You don’t come to places like this to live. You come here to die.”

That’s true of any retirement community, and the best joke in Late Phases is how little anyone cares what’s happening. McKinley’s new apartment has claw marks in the wallpaper that no one has bothered to repair between tenants. (It’s obvious they’re claw marks, because there’s a claw stuck in one of them.) After one resident is discovered with her intestines strewn around her living room, a cop patiently explains to McKinley, “Sir, attacks like these happen all the time around wooded areas like this. The problem is, the elderly can’t defend themselves.” The police investigation goes nowhere, because there isn’t one; it takes McKinley—again, a blind man—to bother following the man-sized bloody footprints leading away from the “animal attack.”

McKinley’s blindness could be terrifying or something he uses to his own advantage, but the filmmakers do next to nothing with it. His son doesn’t trust him with cash, because he’s afraid he’ll lose it, but doesn’t seem to mind at all that McKinley keeps waving around deadly weapons he can’t aim. (Neither does the gun dealer Dana Ashbrook plays—though he also doesn’t bat an eye when McKinley requests silver bullets and shotgun shells, so maybe he’s just impossible to faze.) Still, there’s at least one good plot reason for McKinley’s disability: Only a blind man would be frightened of this movie’s werewolves, which are so clearly men in furry suits that they look like college mascots. The baggy legs sag, the arms hang loose, and the best advice anyone could give them is to infect a tailor with lycanthropy as soon as possible.

Late Phases has the bones of a great campy horror comedy, and there’s at least one moment of gory genius—an iron lung merrily pumping blood from the neck of its recently decapitated resident—but far too much of the film plays things straight. Ernesto Herrera’s cinematography is graded with a dull autumnal glow, which pairs nicely with the interminable conversations between McKinley and the local priest played by Tom Noonan. (Topics covered include sacrifice, guilt, and the horrors of war, but somehow they never get around to discussing werewolves.) The film isn’t well-made enough to say anything interesting about aging—it doesn’t even manage to say anything interesting about being attacked by werewolves. As the onscreen moon goes through its inexorable cycle, Late Phases transforms from laughably non-frightening horror film to self-serious family drama and back again, all the while remaining ferociously, ravenously boring. Silver bullets would be a mercy.