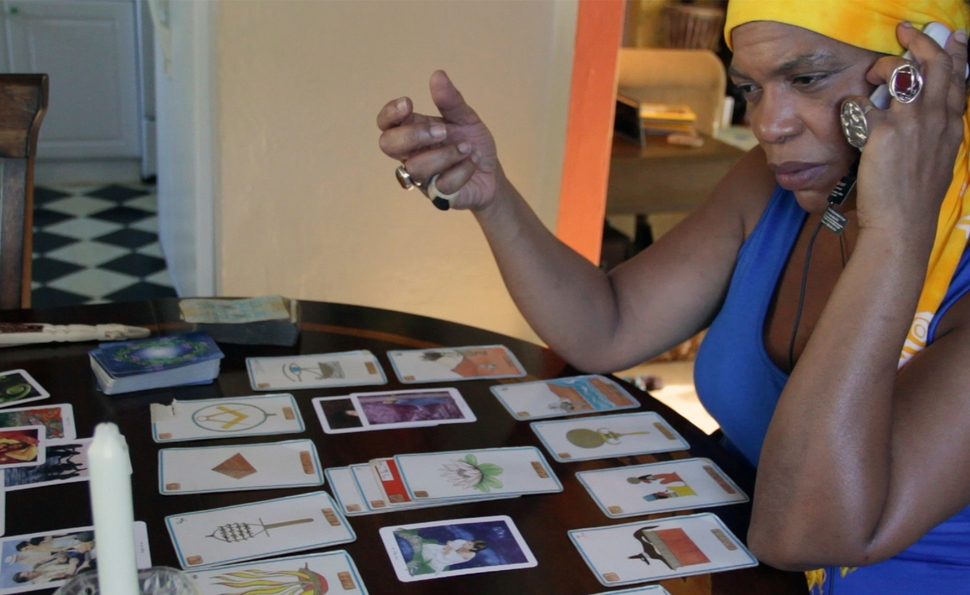 Channel-flipping night owls and insomniacs during the late 1990s and early 2000s will no doubt remember Miss Cleo, the tarot-reading star of the Psychic Readers Network. Part seer, part pop psychologist, Miss Cleo had an appealingly earthy, maternal quality, enhanced by a robust Jamaican accent: “Come for a free tarot readin’!,” she said, dropping the “g” from a great height. It turns out that “Miss Cleo” was really Youree Dell Harris, born and raised in Los Angeles. When several states and the FCC filed suit against the Psychic Readers Network, she escaped indictment. In Hotline, a documentary about call-in services of many different stripes, Harris brushes off the lawsuit, and offers fascinating insight into how the business works, and what’s required of a successful operator. She also insists on having positive, healthy, productive interactions with callers, who in most cases were more than happy to fork over $5 a minute for her time.

That meaningful sense of connection is a unifying theme of Hotline—and the source of its undoing. Taken individually, the stories of Miss Cleo, or the operators of suicide-prevention centers, or “Jeff, one lonely guy” who got tens of thousands of calls responding to a poster with his phone number, all hold their own special fascination. But director Tony Shaff has only so much time to get into the particulars. By combining all these tales—and many more—into a broad survey of hotlines of all stripes, Shaff seeks to express some universal truths about phone-line interactions. But inevitably, his insights wind up at the lowest common denominator. Callers want to be heard and validated; operators want to listen and help them achieve that validation, even if it’s in the form of a shame-free orgasm. Whenever one segment or another gets interesting, the film loops around to the same banal sentiments.

In addition to Miss Cleo, Shaff follows Jeff Ragsdale (a.k.a. Jeff, one lonely guy), who posted flyers in Soho offering his number to anyone who wanted to talk about anything, and got such an overwhelming response that it took over his life. Shaff also visits both non-profit and for-profit phone services. The former include The Samaritans, a 24-hour suicide-prevention center in New York; an LGBT hotline that frequently counsels young people whose same-sex attraction puts them at odds with conservative family members or communities; and an emergency worker in Austin who manages mental breakdowns. The latter include two different sex operators who confess to having real relationships with men on the other line, albeit with drastically contrasting results.

Hotline’s opening and interstitial segments promise a tone poem about remote connections, but Shaff settles into a far more conventional talking-heads documentary, with only the occasional break to follow Jeff around the city as he volleys nonstop cell-phone calls, or to hang out in a parked car as a sex worker does her business. Shaff chooses his subjects almost too well, because Hotline suggests about 12 good documentaries that have been folded into a single mediocre one. And in forcing his point about the legitimate intimacy two strangers can achieve over the phone, Shaff glosses over the uglier side of those interactions: callers who misrepresent themselves or are abusive, operators who exploit customers for extra minutes, counselors who make critical mistakes in judgment. The film’s chorus of voices winds up singing a banal tune.