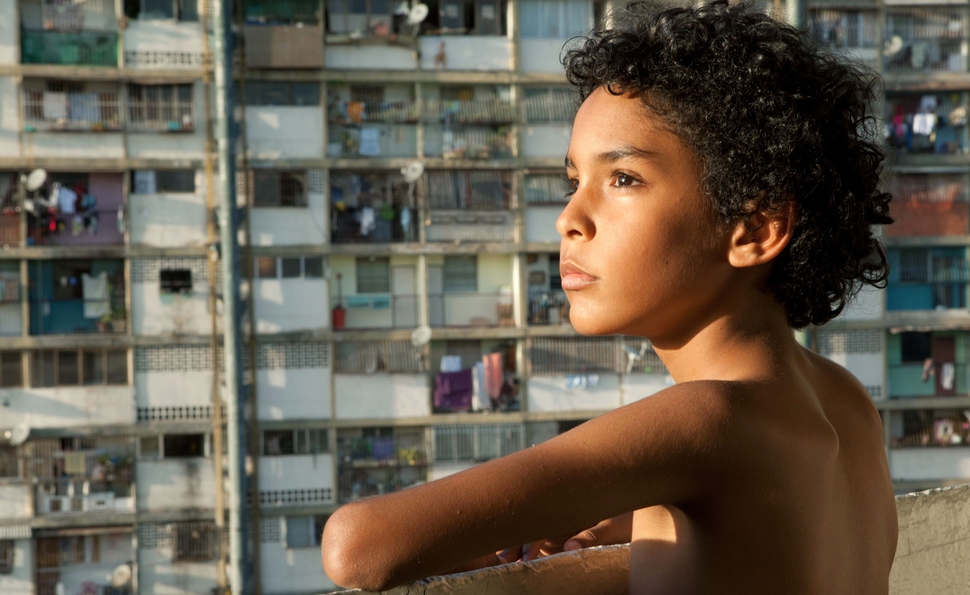 Nine-year-old Junior (Samuel Lange), a curly-haired outcast living in a Caracas housing project, is gay, but doesn’t fully realize it yet. He steals glances at the handsome grocery clerk at the foot of his building, waves his arms gently to the music in his head, and obsesses over straightening his afro for a school portrait he can’t afford. He feels different from other kids, but he hasn’t developed enough to recognize his own latent desire. The adults in his life are another story. They see how he’s developing, and they react—sometimes cruelly, sometimes confusingly, but in every instance unfairly. Junior can’t help being himself, and it’s a traumatizing ordeal for him to be pinballed back and forth between a mother who teems with hatred and resentment, and a grandmother who shares her old ’60s pop records with him, encouraging him to sing.

Without being didactic for a second, Mariana Rondón’s Bad Hair gets at the hardship of a gay child’s formative years, when he isn’t fully cognizant of his predilections or actions, but gets punished for them anyway. When Junior’s mother Marta (Samantha Castillo) has sex in clear view of the boy, she’s teaching him a lesson cloaked in hostility, like a parent trying to get a kid to stop smoking by making him smoke the entire carton. But Rondón herself isn’t cruel to anyone in Bad Hair, including Marta, whose anger is placed in the context of a single mother of two who cannot figure out how to take care of her children, and cannot find work without humiliating herself. Rondón has made an intimate, character-driven drama that nonetheless doesn’t limit itself to the confines of Marta’s apartment building. There’s a big, bustling city out there, too, and an indifferent one at that.

Rondón drops into Junior’s life in media res, and leaves his family’s circumstances in the dark. We know, for example, that his father is no longer around, but not what happened to him. Junior’s grandmother Carmen (Nelly Ramos), from his father’s side, has a brittle relationship with Marta, and openly denies that Marta’s new baby  is her grandson. Rondón also opts not to clarify why Marta has lost her job as a security officer, which has resulted in minimum-wage work cleaning houses while she begs for a second chance. As much as Junior’s grandmother indulges him, combing his hair straight and sharing her music collection with him, he doesn’t like her any more than his mother. The best he can do is close his eyes and daydream a little.

There’s some neo-neo-realist boilerplate to Bad Hair, particularly when it comes to Marta’s struggle to find work, which ends in a predictable act of degradation. But Rondón fends off the plotty elements as best she can, and situates the story so firmly in the ecosystem of a massive Caracas housing project that it could scarcely be mistaken for another city or another culture. She leaves the impression that the tension between mother and son has as much to do with economics as with cultural factors; Marta’s stress in living hand-to-mouth spills over into the abuse of a boy she doesn’t understand. Rondón treats her characters with toughness and empathy, without devising easy outs or slipping into sentimentality. Like Junior’s hair, they’re all dealing with the tangled mess they’ve been given.