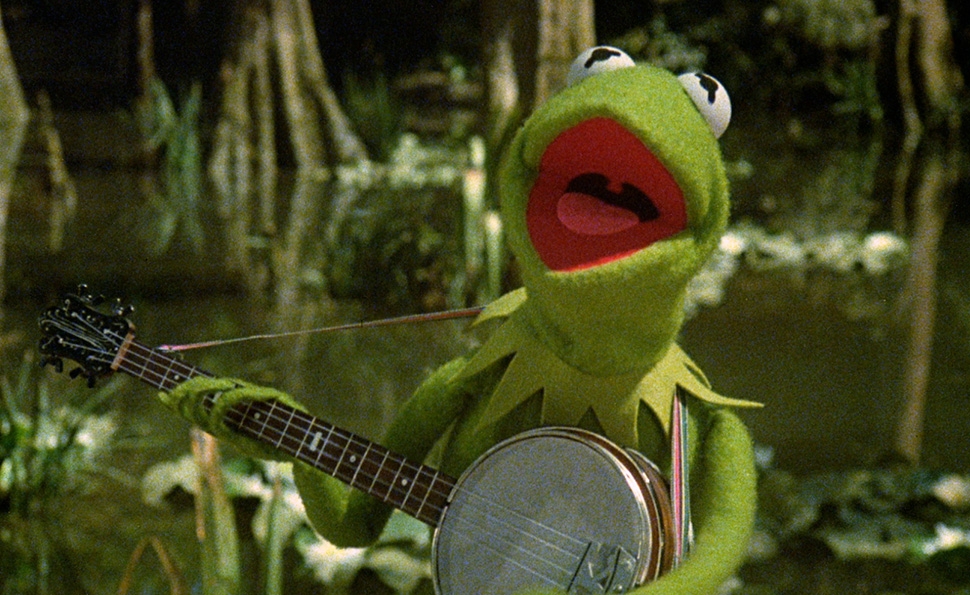 The Muppet Movie was released in 1979, just in time to sum up much of what 1970s pop culture had to offer: soft rock, self-help, and crafting. In the wrong hands, these could be insipid, but Jim Henson had great hands. With his Muppets, Henson found a balance between fuzzy post-hippie positivism and self-deprecating wit, and he added in the same quality that made many of the era’s cultural phenomena so charming: simple problem-solving. Just as George Lucas’ Star Wars team turned old model kits and paint into an entire galaxy, so did Henson’s Muppeteers create a menagerie out of felt and string, delighting audiences with how convincingly they could suggest “frog” or “dog” or “pig” without over-articulating. Henson put it all together in The Muppet Show, the syndicated variety series that debuted in 1976 and became a worldwide hit, after years of Henson being unable to get various TV and film projects off the ground. With The Muppet Movie, he took a victory lap, telling his own story on the big screen, “sort of approximately how it happened.”

The Muppet Movie is part road picture and part “Hey, kids, let’s put on a show!” musical comedy, with Kermit The Frog (voiced and controlled by Henson) leaving his swamp and chasing the dream of singing and dancing and telling jokes in Hollywood, so he can “make millions of people happy.” Along the way, he befriends raggedy comedian Fozzie Bear (Frank Oz), weird whatsit Gonzo The Great (Dave Goelz), and karate-chopping beauty queen Miss Piggy (Oz again). Kermit also crosses paths with Doc Hopper (Charles Durning), who owns a chain of french-fried frog-leg restaurants and wants Kermit to be his new spokesman. Hopper and his henchman Max (Austin Pendleton) chase Kermit across the country, determined to make these happy Muppets miserable.

Along with Durning and Pendleton, The Muppet Movie features cameo appearances from a host of comedians, both from old Hollywood (Bob Hope, Milton Berle) and new (Richard Pryor, Steve Martin). The star-a-minute approach is the Muppets’ way of laying claim to a larger comedy tradition—as is the movie’s gag-a-second script. A full year before Airplane, The Muppet Movie was indulging in visual puns (as when “a fork in the road” is represented by a giant dinner-fork) and fourth-wall-breaking (as when Kermit worries that Fozzie is going to bore the audience with a plot recap, and instead suggests that he let other characters read the screenplay to get caught up). The movie announces itself as a movie through a series of genre parodies and homages: romantic montages, Western showdowns, and so on. 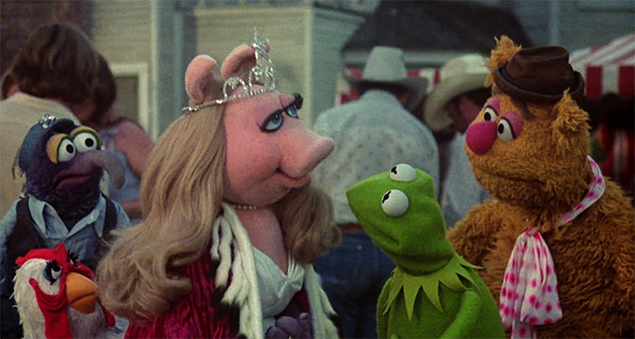 There’s a fair amount of Hollywood magic in the way director James Frawley and Henson’s Muppeteers stick Kermit and friends into scenarios in which he’s riding a bike, rowing a boat, and walking in cowboy boots. But the less showy effects always defined the Muppets—like Henson’s remarkable voice, with which he could ad-lib an in-the-moment reaction or sing a polished Paul Williams/Kenny Ascher song with equal warmth. Even The Muppet Movie’s opening credits—where a rainbow arcs through the clouds while Kermit plunks away on his banjo at the first few notes of the Oscar-nominated “Rainbow Connection”—is stunning not for how difficult it must’ve been to pull off, but for how much it says with so little. That scene is mirrored at the end of The Muppet Movie, when Kermit and his new friends re-create the entire film in a studio, with plywood sets, until everything falls apart and another rainbow crashes in. The lyrics to the song change from the opening, from “the lovers, the dreamers, and me” to “the lovers, the dreamers, and you.” With that one gesture, Henson and his colleagues bid farewell to The Me Generation by insisting that there’d been more heart in the 1970s than many believed.

Disney’s “nearly 35th anniversary edition” Blu-ray doesn’t do justice to one of the most beloved films of its era. On the plus side, the disc is beautifully designed, with menus that look like flannelboards, and a function that cues an animated sing-along whenever the viewer presses the pause button. But the sound mix on the Blu-ray is wildly inconsistent—the songs boom, but the dialogue scenes are muddy—and the special features are sparse, with the most substantial extra being 10 minutes of camera-test footage of Kermit and Fozzie horsing around in the U.K. countryside. The Henson-era Muppets are a cultural treasure. It’s time for the people who manage the archives to start assembling and releasing them with much more care.