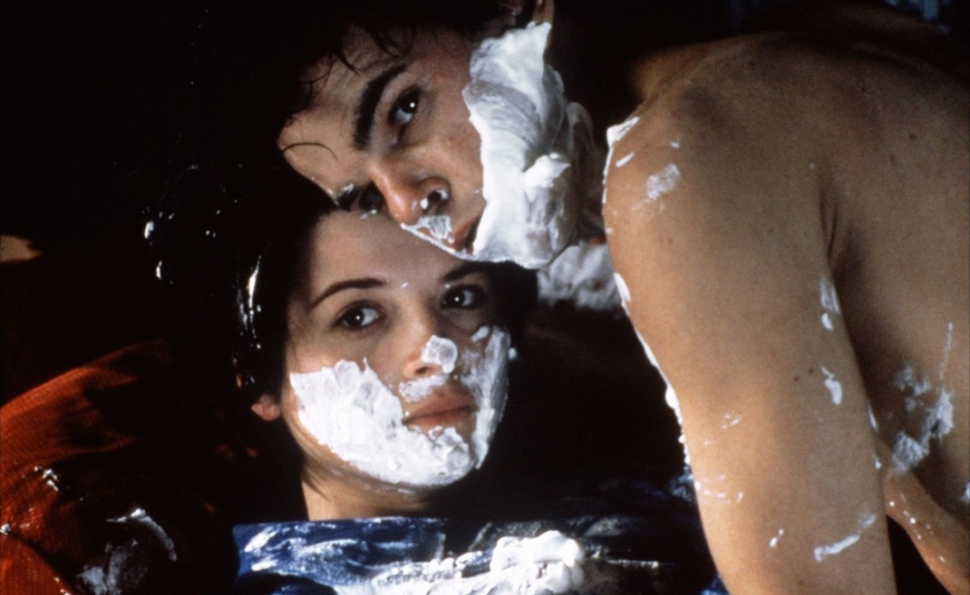 “I’m a filmmaker,” Denis Levant’s Alex declares in Boy Meets Girl, Leos Carax’s striking 1984 debut feature. Alex then adds that he hasn’t made any movies, but he’s busied himself by coming up with titles for movies he could make. That’s Carax in a nutshell: His characters don’t have jobs—unless being an archetypal gangster counts as earning a living—and they live in a world that’s either wholly cinematic or, in the case of his 1991 romantic epic The Lovers On The Bridge, cordoned off from society at large. It’s as if Carax was the subject of a scientific experiment: What would happen if a human subject was born and raised inside a repertory house, and learned absolutely everything he knew from the movies? As it happens, it’s a productive experiment, because Carax has grown into one of the world’s strangest, most enchanting, most whimsical filmmakers, with the caveat that his work is perhaps most exciting to those who share his cinephilia.

If Carax was born and raised in a repertory house, then his doting father is Jean-Luc Godard, who taught the precocious boy everything he knows about speaking in a language of deconstructed reference. Yet the crucial difference is that Carax’s interest in politics—or anything outside his hermetic universe—is minimal, and he’s more inclined to play. Even the title of Boy Meets Girl winks at its knowing audience, who can expect Carax to fiddle with one of cinema’s fundamental building blocks. And fiddle he does, because boy doesn’t really meet girl in the flesh until more than an hour into the film; the time that precedes it is consumed by mutual complications, near misses, and palpable longing. It’s also discursive and strange for its own sake: It’s Carax’s late entry into the French New Wave.

Photographed in luminous black-and-white by Jean-Yves Escoffier, Boy Meets Girl introduces Carax’s muse in Lavant, whose peculiar features enhance a special talent for mischief-making and acrobatics. Daytime doesn’t exist in the film, and Paris at night is a place for dreamers and lonelyhearts, where nothing is out of the question. Alex and Mireille (Mireille Perrier) are dealing separately with traumatic breakups: Alex’s girlfriend has taken up with his best friend, whom he subsequently attempts to strangle, and Mireille, an aspiring actress from the country, is stranded by her boyfriend. Alex overhears Mireille’s break-up over the apartment intercom—Dead Kennedys’ “Holiday In Cambodia” is playing full blast, an early indicator of Carax’s musical eclecticism—but the two don’t meet face to face until a party brings them together.

The trick of Boy Meets Girl is that Carax doesn’t need boy to meet girl in order to whip up a romantic, spontaneous atmosphere. In fact, he really doesn’t know what to do with Alex and Mireille’s relationship once they get past their conversation at the party; the film has exactly the fatalistic ending that might be expected of a homicidal man and a suicidal woman. But Carax excels at creating a space that’s a luxury for viewers to occupy: Escoffier’s black-and-white photography—crummy on the old DVD version, silken on the Blu-ray—could be eaten with a knife and fork, and anything can happen, like a man gracefully front-flipping over a subway turnstile, or a tempestuous lover chucking her ex’s art into the Seine.

Two years later, Carax returned with Mauvais Sang, which adds “bang bang” to Boy Meets Girl’s “kiss kiss,” and splashes of bright red to the nocturnal environment, but otherwise proceeds along the same movie-movie lines. Suggesting a cross between Godard’s Alphaville and François Truffaut’s most Godard-like film, Shoot The Piano Player, the film is Carax’s ode to the gangster and science-fiction genres, though he’s eager to break the rules in his own way. Lavant again plays a character named Alex whose temperament isn’t much different from the Alex of Boy Meets Girl, but whose circumstances are. Shown literally fleeing from a relationship with the clingy Lise (Julie Delpy, at 17), Alex gets taken in by Marc (Michel Piccoli) and Hans (Hans Meyer), a couple of old gangsters who prize his dextrous hands. In this future-world, a virus called STBO has spread across Paris, affecting young people who make love without being in love; a giant corporation has an STBO serum under development, and a powerful American woman is forcing the gangsters to steal it for her in order to pay back their debts.

Sounds like the making of a thrilling heist picture, no? No. After setting the premise, Carax throws on the brakes and spends most of Mauvais Sang documenting the period before the heist, when Alex eyes the like-aged Anna (Juliette Binoche), who’s committed to Marc, despite being about 20 years his junior. Alex and Anna’s interactions are the enchanted heart of Mauvais Sang, volleying between sequences of the two at play and ones that emphasize their loneliness and disconnection. Lavant bounding down the street to David Bowie’s “Modern Love” is the very definition of Carax’s “ecstatic cinema”—and one of the great pop-music moments in cinema, period—but it’s prefaced by the thought that they should let the night flow through them, and have their feelings take over. And with that, Carax leaves a helpful suggestion about how best to watch his movies.

It cannot be emphasized enough how much better these Blu-ray editions look than the DVD versions released in the early 2000s. The 2013 New York Film Festival screened restored editions of these first two features to go along with Carax’s sensational Holy Motors, and now they’ve been transferred to disc. The main prize on either disc—they’re sold separately—is Mr. X, A Vision Of Leos Carax, a 73-minute documentary attached to Mauvais Sang that burnishes the Carax myth while also providing good information and interviews with many of his chief collaborators. The Mauvais Sang features also include 20 minutes of silent outtakes, a deleted scene between Alex and Marc that probably shouldn’t have been deleted, and trailers for the original and 2013 releases. Boy Meets Girl comes with Lavant’s screen test, which shows him as the irrepressible presence he’d become, and an on-set feature focusing on the long party conversation between Lavant and Perrier.