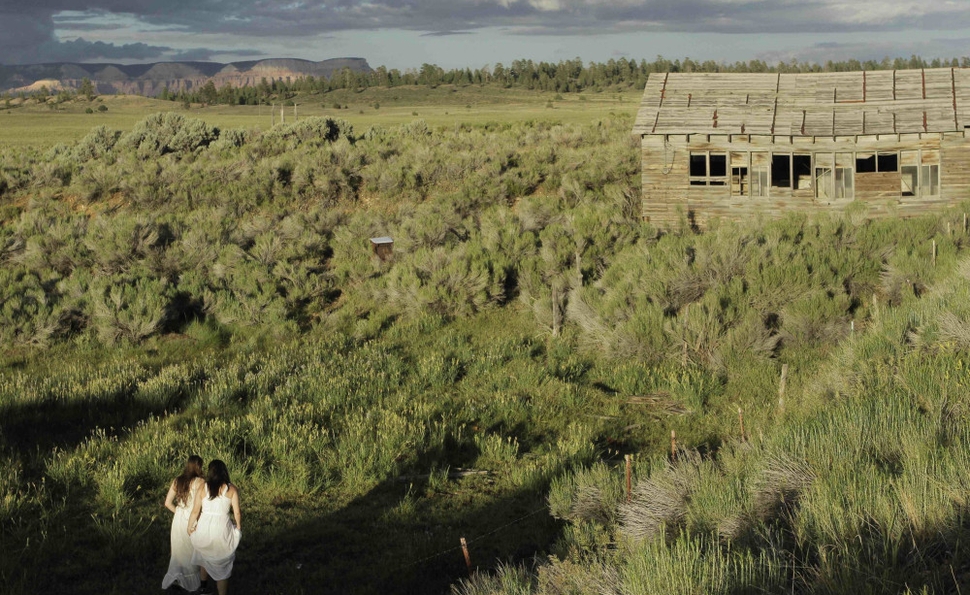 Butter On The Latch / Thou Wast Mild And Lovely

The first full-length offerings from newly minted director Josephine Decker, Butter On The Latch and Thou Wast Mild And Lovely, will likely remain linked throughout the rest of her career, not just because they’re so tonally and technically similar, but because they arrived on screens within months of each other, cinema’s version of Irish twins. Both films have appeared on the festival circuit in recent months—Butter On The Latch debuted in September 2013 at the La Di Da Film Festival; Thou Wast Mild And Lovely premièred at the Berlin Film Festival in May 2013. But they’re now getting a double release at New York’s IFP Media Center.

Opening with a series of strange events in New York City, Butter On The Latch rarely lets up on its pervasive feeling of dread. Fresh off a reasonably good time attending a vaguely experimental play, Sarah (Sarah Small) is jarred by a phone call from a hysterical friend who needs help escaping an undefined space. Has she been held hostage? Is she simply intent on running out on a bad one-night stand? It’s never clear, and although Sarah is initially rocked by the call, she soon engages in activities not befitting a person who needs to help a desperate friend: She goes out drinking and dancing, ending up at the home of a half-clothed stranger, whom she runs from in turn, screaming all the way.

Sarah is unstable, and that immediately becomes plain through rattling camerawork by DP Ashley Cooper, as well as Decker’s loose, intuitive editing. It’s hard to get a grip on what’s onscreen, but it feels disturbing, and Decker toys effectively with audience response as the film winds on. That sense of menace, that something is very wrong—or more accurately, about to go very wrong—doesn’t abate, even when Sarah uproots herself, presumably in search of a little peace and quiet. Cooper’s cinematography and Decker’s direction feel intimate, but never obtrusive, and the film continually pulls its audience inward, even as the unnerving material itself should repulse them.

Some time later—as becomes the norm in Butter, time itself is undefined and elliptical—Sarah winds up on the other side of the country, surprising her friend Isolde (Isolde Chae-Lawrence) at a secluded folk camp in California’s Mendocino woods. Initially, it’s a happy reunion, but tension between the pair steadily ratchets up, building on an intense, believable chemistry between the two female leads.

Perhaps the problem is that Isolde seems comfortable within the world, secure in her place, while Sarah never appears to settle in, whether on the New York streets or in the California woods. She’s an outsider, and Isolde’s ability to slip into places and situations—including the purposely one-dimensional Steph (Charlie Hewson), whom Sarah soon fixates on—makes Sarah’s inability to adapt all the more obvious.

The film is decidedly free-form, slipping into still more abstract and non-linear storytelling as time goes by, but it’s intriguing. Decker’s style is experimental, but not abrasive, and Butter demonstrates her ability to retain an audience’s attention even when refusing to give them a clear story told in a traditional manner. That’s no small feat in the world of low-budget filmmaking, and Decker’s sure hand and unique style keep Butter swirling onward into weirder, woolier territory.

The kind of creeping madness and dark desires that mark Butter are also at the forefront of Thou Wast Mild And Lovely, the more visceral and violent half of Decker’s double feature. Set on a quiet Kentucky farm, Mild is equally preoccupied with interlopers (invited or not) and the effects they have on established situations and relationships, but with a harder edge and a duller story than Butter’s more haunting charms.

Joe Swanberg toplines the film as that interloper: Akin, a traveling farmhand who comes on board to help out a father-daughter pair during a particularly broiling Southern summer. Swanberg proves to be a more active male lead than Butter’s Hewson, but he fails to fully inhabit the role. Viewers know Akin is up to something early on—the clear removal of his wedding ring makes that obvious—but Mild’s twist is that he’s the eventual innocent in a twisted cat-and-mouse game that’s unsettling but flaccid.

Decker leans on the film’s sexuality early on, opening the film with a female-voiced monologue that expresses her desires for her lover, before frankly lauding his abilities to open and close her legs and love her as she deserves to be loved. The voiceover recurs throughout the feature, at turns assured and cloying, striking and strange. It’s unclear who’s speaking the words, but an early candidate is Sarah (Sophia Traub), the farm’s owner alongside her creepy father, Jeremiah (Robert Longstreet).

Sarah takes a shine to Akin early on, though it soon becomes apparent (well, as apparent as things get in Decker’s abstract world) that this might be some kind of routine for both her and Jeremiah when it comes to seasonal help. Traub is in her early 20s, but when Sarah isn’t speaking, the character seems undeniably childlike, a lamb among wolves. But she has some power, and when she and Akin take finally take up, it’s with the kind of force and violence more frequently seen in nature itself. (It’s no coincidence that nature is far more brutal in Mild than in Butter, miles more bloody and foreboding.)

Though Decker pumped up the salaciousness for the ultimately icky Mild, its connections run shallow, and most of its action—particularly in the over-the-top third act—feels spectacularly unearned. Butter’s growing dread is instead replaced with something, well, much milder in Mild, which aims to amplify what Decker so easily accomplished with her first feature. Still, the double feature serves as an effective, evocative introduction to Decker, who knows how to subvert demands while still serving up something fresh and compelling.