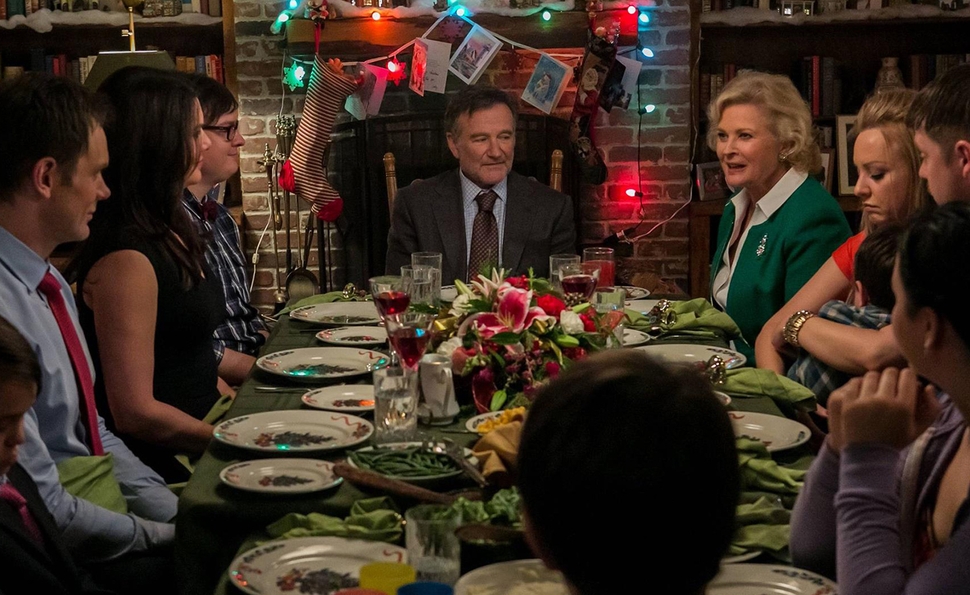 Robin Williams’ death lends a wholly unearned hint of gravity to A Merry Friggin’ Christmas, a Yuletide comedy so slight, it sometimes feels like a bonus-sized Christmas episode for a sitcom that never should have been green-lit in the first place. Even with Williams in fine, feisty form in perhaps his final major role, it still never comes close to justifying its slender existence. Director Tristram Shapeero, producers Anthony and Joe Russo, and star Joel McHale worked together on Community, but A Merry Friggin’ Christmas feels more like the kind of well-worn Yuletide hokum that Community would lovingly, ambivalently reference than anything that would appear on the show itself. It’s the the kind of movie where fathers and sons achieve a Christmas peace while encountering a grizzled old drunk who might just be, but probably isn’t, Santa Claus.

What little substance A Merry Friggin’ Christmas possesses comes from the conviction and authenticity Williams brings to the role of Mitch, a recovering Wisconsin alcoholic whose earlier penchant for Yuletide benders and sour, Scrooge-ish spirit played havoc with Christmases for his perfectionist son Boyd. In a bid to be as little like his father as possible, the wealthy, uptight Boyd (McHale) prides himself on providing perfect Christmases for his family, particularly his Christmas-loving son.

But Boyd’s holiday plans are rearranged when a surprise baptism involving the sorta-progeny of his fuck-up brother Nelson (Clark Duke) forces him to bring his perfect family from their Chicago home to small-town Wisconsin to be with his dad and his siblings. Once there, Boyd is forced to confront Mitch and Mitch is forced to confront his disappointing son, whose effete lifestyle and sensibility stands in sharp contrast to his working-class Midwestern stoicism. To help facilitate the father-son bonding at the film’s core, Boyd has conveniently left his son’s presents in Chicago, so he and Mitch must drive down to Chicago to retrieve them before Boyd’s precious son wakes up.

The stakes here are almost perversely low, and the conflict is just as mild. In fact, much of the conflict is cleared up before the events of the film begin: While Mitch zealously holds onto his anger and resentment toward Boyd, he’s otherwise made peace with the rest of the world and his family after getting sober, and he’s seemingly just as invested in protecting his grandson’s belief in Santa Claus as Boyd. So a lot of the movie comes down to waiting for the moment when Mitch will break down and admit to himself and Boyd that gosh darn it, Mitch actually is proud of his rich, successful, father-of-the-year son, despite his awful habit of remembering the emotional and verbal abuse Mitch heaped upon him while drinking.

The tension between McHale and Williams rings true, though it never threatens to become funny or amusing, in large part because Mitch’s verbal sniping at his son begins and ends with calling him a series of girls’ names. Without that very Midwestern friction, A Merry Friggin’ Christmas would be without conflict or stakes, a featherweight time-waster about a smattering of one-dimensional kooks, some hoary business involving presents, and Oliver Platt as the quasi-magical figure “Hobo Santa,” who is a credit to neither hobos, nor Santas, nor Oliver Platt. (All three have distinguished heritages that do not need A Merry Friggin’ Christmas.) A Merry Friggin’ Christmas is one of William’s final films. (Night Of The Museum: Secret Of The Tomb is on the way.) Unfortunately, he seems to have ended his career in characteristic form, by investing all of himself and his seemingly irrepressible energy into tacky little projects unworthy of it or him.