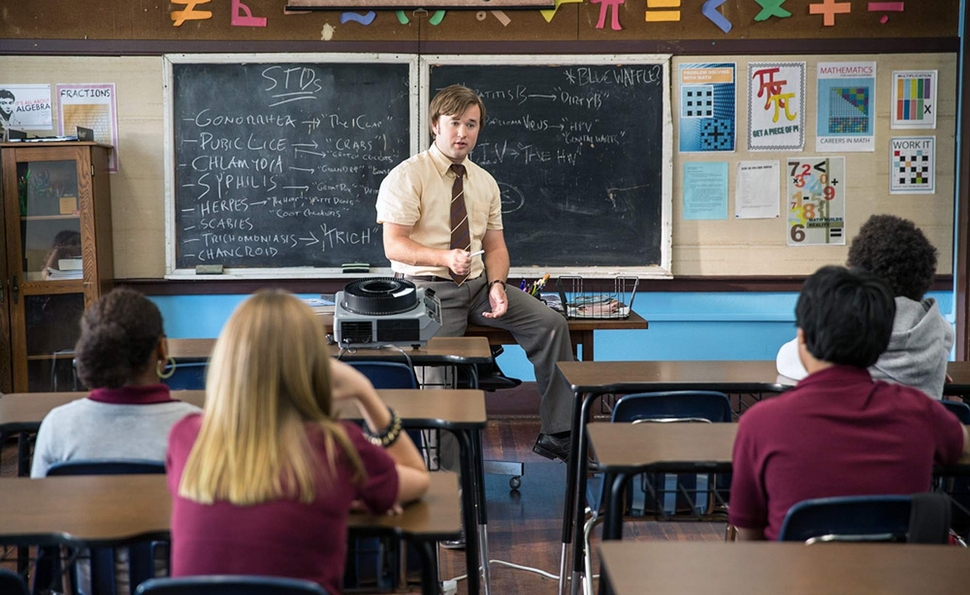 Earlier this year, Haley Joel Osment, best known as the child star of The Sixth Sense, appeared in Kevin Smith’s walrus-themed Canadian horror film Tusk, based on a dumb joke spun out during Smith’s podcast. Now Osment is starring in the staggeringly idiotic new romp Sex Ed, which merely sounds like it could have come from the same source. Though to be fair, Sex Ed, a comedy about a virgin named Ed who begins teaching sex ed—seriously, we are not making this film up—also feels like it could have been based on a throwaway Family Guy cutaway gag, or one of the fake Adam Sandler movies in Funny People.

Sex Ed casts the still-baby-faced former child star as Ed, an idealistic young man who dreams of being a teacher, even though circumstances have reduced him to working in a bagel shop. Ed is a pale-vanilla bastion of sexlessness in a sex-crazed world. Everywhere he goes, he’s assaulted by bawdy locker-room banter, whether he’s at a job interview, checking out a new bar, or returning home, where his roommate JT (Glen Powell) engages in one flamboyant sexual experiment after another. It’s as if the supporting cast, which includes old pros and experienced improvisers, like Upright Citizens Brigade’s Matt Walsh and Parks And Recreation’s Retta, were paid per filthy sexual reference, the more obscure the better.

Ed feels left out of this never-ending bacchanal, but when he realizes just how much ignorance and misinformation there is among the students at the new high school where he has begun teaching, he takes on the task of educating them himself. Yet even though it seems like everyone around him talks about nothing but sex, his sex-ed classes prove controversial.

Sex Ed’s early sequences have little going for them beyond an unabashed, unapologetic vulgarity that delights in lewdness and phrases like “cock-bagel.” Yet at a certain point, the film becomes achingly sincere in its advocacy for more sexual openness and less repression in education. It becomes a message movie about the importance of sexual education in high schools without ever losing its sniggering, juvenile attitude toward sex, or its complete lack of substance. So we learn that the young black student who freestyles a rhyme about Ed being double-penetrated is only acting out because he’s terrified of his controlling preacher father, who doesn’t like Ed or his advocacy of sexual education one bit. (Or at least not until leading perhaps the year’s least convincing example of the slow clap.)

For a film that makes an incongruously sincere stand for sexual openness and freedom, Sex Ed has an awfully regressive attitude toward sex, especially where women are concerned. Sure, JT and his wild, adventurous partner are depicted in a positive light, but elsewhere, Abby Elliott pops in for an excruciating-for-the-wrong-reasons cameo as a woman of easy virtue who gets drunk, throws herself at Ed, then drunkenly sobs that men are into her because she’s so amazing at performing oral sex. There’s also an underwritten subplot involving Ed’s courtship of a student’s sexy older sister, which takes a strange, unsatisfying turn late in the film. It seems to confirm that even though Sex Ed is about sex, the filmmakers would rather not deal with its realities or complexities at all. The film is sex-positive in theory, but nevertheless seems to view aggressive sexuality as the domain of the broken, creepy, and superficial. Sex Ed takes a lot of glee in subjecting its timid hero to a rancid sewer of sexual excess early on, but the film’s apparently strong belief that it deserves to be taken seriously—despite its title, premise, and utter worthlessness—both as a comedy and as social advocacy might just be the most offensive thing about it.